Let's get this started.

I had to get a burger in D.C. And that meant one place: Ray's Hell Burger. Every since it opened last summer it's been known as serving one of the best burgers in the city. Also, it's Obama-approved. But it's not actually in Washington D.C.—it's in Arlington. Which is just across the Potamic River. AND SO ON THE METRO WE GO!!!...to Rosslyn. (It makes more sense to get off at the Court House station though so you end up walking downhill instead of potentially sweating up a storm uphill. Like we did.) 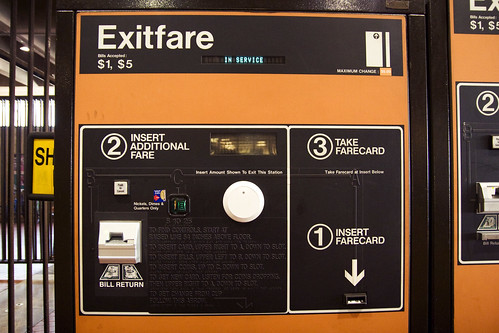 On a random note, I think this exitfare machine could use an upgrade. 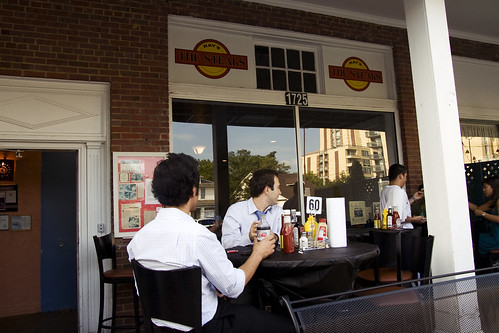 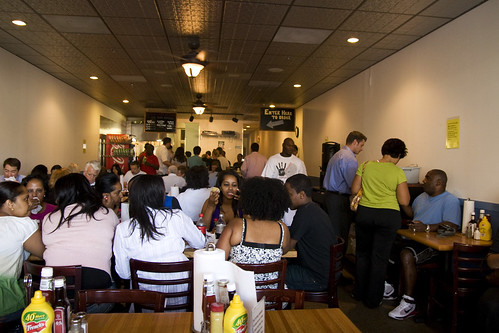 The restaurant wasn't too crowded when we—Karen, Jesse, Veronica, and me (Tristan and Colin went to the pho place next door)—got there around 6pm. You place your order at the counter, they give you a number, and then you wait for the burgers to come to you. 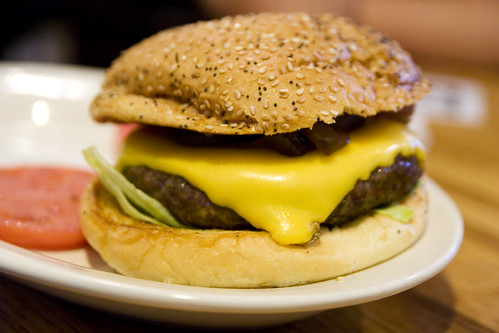 And then it's time for burger rationing. The four of us decided to play it safe and exercise some sort of moderation by splitting two of their 10-ounce burgers. Both burgers came with lettuce, tomato, raw onions, pickles, and a watermelon slice. 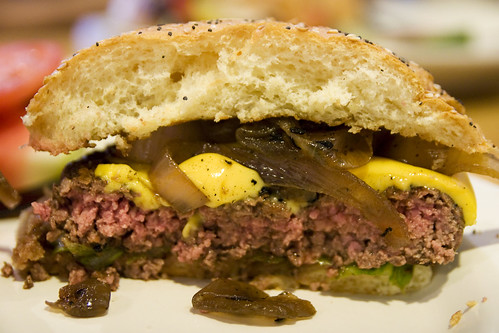 After taking a first bite of the the cheeseburger topped with grilled onions I realized I probably could've eaten an entire one on my own. The medium rare patty was juicy, soft, and well seasoned, with a bit of char on the outside. A melty blanket of American cheese and sweet, tender onions made it even better. The bottom half of the bun eventually became soaked in meat juice, generally a no-no in the burger-eating experience, but I didn't really mind it since the burger was otherwise awesome. I just...shoved it in my mouth more quickly than I normally would. I preferred the simpler cheeseburger over the second one, the preformulated The Mack topped with American cheese, tomato, lettuce, pickle, red onion, and Ray's HECK Sauce (a tangy special sauce). Not that The Mack was less delicious—I just tend to prefer less junk on my patty.

Ignoring the soaked bottom bun, which isn't much of a problem, I can't say anything bad about this burger. After I finished off my portion I thought, "NOOO, I WANT MOAR, OH GOD." Luckily, Janet joined us later in the meal and I got a bit of her burger...but I still want it now, over a month later. There's a reason this place is so popular. And to make things even better, the whole delicious burger package starts at just $8. That's a good deal. Time to burn some calories.

We burned off some burger calories by walking to Georgetown on the picture-perfect evening. 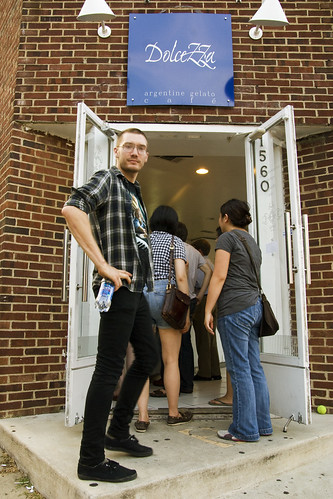 OH, IT'S TIME FOR GELATO.

...And then we replenished the calories by getting dessert at Dolcezza, the best gelateria in Washington DC. Admittedly, I say that not having tried any other gelato in the city, but gelato sense is pretty good. Sometimes you just know. I went with the non-adventurous combination of pistachio di Bronte and yellow peach. Unfortunately, their pistachio, which I remembered being pretty awesome the first time I tried it, was lackluster on this visit. The texture was agreeably smooth and creamy, but it didn't taste like Bronte pistachio; it tasted like..flat sweetness. There was no rush of memories of eating gelato in Italy—just an emptiness from the lack of warm, nutty happiness. Janet agreed that something was wrong with it; my taste buds weren't defective.

We (and by "we" I mean Janet, with me silently standing next to her) expressed our concern about the pistachio gelato to one of the owners, who proceeded to taste it about four times and explain that sometimes the batches come out differently. And then he gave us samples of a gazillion other flavors that were fantastic and happiness-inducing. The pistachio was the only off-flavor I tried—everything else made up for it. DOLCEZZA, YOU STILL WIN IN MY HEART. 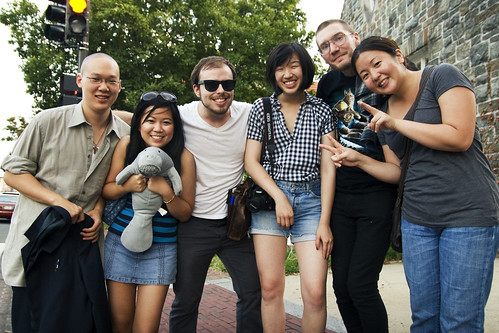 Our walk towards Adams Morgan to meet up with Olivia took us to a Rite Aid, where we found this. ...BumpitsTM. If you've ever bought this, please don't tell me. Later, we visited 7-11 where they were advertising LIQUID ARTILLERY SLURPEE. EXTREEEEME! WILL HIT YOU WITH THE POWER OF FLYING SHRAPNEL AND MISSILE LAUNCHERS ANNNND FROZEN BEVERAGE SLUSH AND SORTA FUTURISTIC-LOOKING FONT IN CAPS. While waiting for Olivia at her office, we took a bunch of random photos. Mostly featuring Manatee Puppet. Because that's what 20-something-year-olds generally do in their spare time. Right? Right. 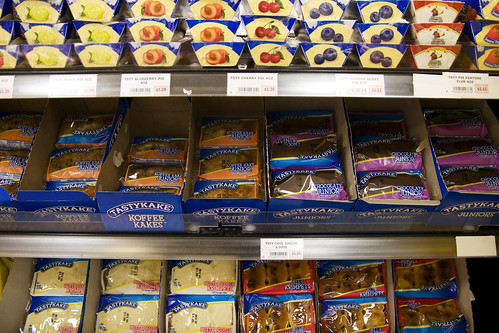 When Olivia was ready to go, Tristan, Veronica, Colin, and I piled into her car and went on our merry way to our final destination of Louisa. We stopped at Wawa during the late night ride to refuel our bellies, but I wasn't very hungry so I merely looked at the wall of Tastykakes from afar, wondering what lied beneath those plastic wrappers. (I've never had one before. Oops.) 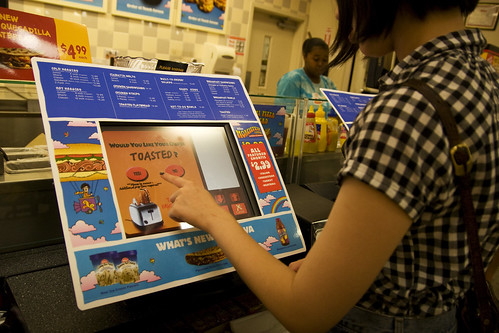 Nor did I indulge in a customizable hoagie, although the ordering system was sort of neat. The F'Real shake machine was sort of temping (hell yeah, I love milkshakes), but I said no to that as well.

I ended up stealing some of Olivia's popcorn though.

When we got to Tristan's house/farm, Olivia and I passed out in Tristan's room while Tristan, Colin, and Veronica braved the great outdoors and slept in a tent. Last year I went the tent route from day one, but this time...I was just too damn tired. Besides, I was a veteran of "sleeping on the Jones' lawn" and figured that gave me a "get out of tent free" card or something.

But I earned my keep by sleeping in the tent for the remaining nights.

HELLO THAR! I read that in Grover's voice. I've never purchased bumpits. It's weird. "I'm going to go to the beach, but I can't swim on account of this bump in my hair." No.

That gelato looks awesome. I've never been anywhere that sells the gelato with fruit stuff or other stuff on top of the gelato before, but it makes it seem better. The cucumber vodka mint sounds good! Although, if you can't really taste vodka then what's the point?

I have got to stop reading your blog in other places then my own home.
Right now I'm sitting in a public library, and when I saw that first hamburger pic I accidentally made a loud "MMMMMMMMM"-noise. Got some confused looks...

(I'd love to be your first non-asian female friend btw ;))

Can I just it's a really bad idea to be looking at pictures of gelato when it's horridly hot here at the moment? GAH.

That being said, I wish you'd tasted the milkshakes. I've always wondered what F'Real tastes like.

Christina: Anything with an alcohol in the name makes me think "NOOO DO NOT WANT" but I guess the flavor is usually..not..really there. Hm. I would totes just go for cucumber gelato.

Maja: Yup, gotta keep down the mmm-sounds and drooling public. ;D But I am honored to have elicited such a reaction.

YEAAH you can be on my non-asian female friend list!..not that i keep a list...dodeedoo.

I was laughing at Maja's comment cause I was going to make the same offer. I was thinking about this this week as the Minnesota State Fair is happening and I ate all sorts of deep fried goodness (mostly on sticks as it tastes better that way). I have friends who have claimed spots on my sofa next year and are coming from NYC and Rochester and I was thinking that if they roadtripped they should offer you a spot in their car. All three of us are non-Asian females, as are a good deal of midwesterners.
Plus the MN state fair, we found out, has a 4-H event which is a sheep show crossed with a fashion show in which some lambs wear necklaces. I have a feeling your manatee would approve.

Katie: I WOULD LOVE TO GO TO THE MINNESOTA STATE FAIR! DEEP FRIED STUFF! PWEEAASE!

Someday...sniff. Thanks for thinking of me. ;)

I got badly addicted to tasty kakes when I lived in Arlington.

Mmm, I love a good cheeseburger. Not so much the bad ones, I guess. I also have an uhealthy like of convenience store food, and we often comprise our drive-in dashboard picnic with that yummy junk. Sooo bad, but sooo yum. Good for you for resisting, though!

what the crap?!? IM NOT ASIAN! if by "somewhere" you mean "BOTTOM OF THE ENTRY" then I guess i'll let it slide.

also, tristan and colin look miserable on the metro. I dont blame them. how i miss the subway..

Julie: I like convenience store food in ASIA! But not so much here. :[

Olivia: "Somewhere" pretty much means "anywhere not in that photo I was captioning."

Yeaah we had a GRAND TIME on that train.

haha, i was pretending to order a hoagie. it's a hoagie hoax!

Hey! I am a huge fan of your blog :) I came across it while going to school in ny and have continued reading it while at georgetown, so imagine my surprise when I saw that you uploaded pictures of Dolcezza and the key bridge!

Veronica: The hoagie just wasn't meant to be!

I will prosper; unsure of how long I will live.

I think you should start announcing when you come to DC so your loyal semi-lurking semi-stalking readership can join in on your eating quests. Yay for eating with random people who you met on the interwebz! :)

I thought Pitango Gelato was better than Dolcezza (less sweet) but it's been a while since I've been to Dolcezza.

Jin: Next time I shall announce myself! Hopefully I'll be in DC for longer than a day. :)