This post originally took place on my birthday, August 27. I wouldn't say it's as delayed as others (I'm a month behind) but yes, I continue my blog's theme of "posting things late." I have a pretty good excuse though. Latest thing was that Tristan got hit by a car; previous thing was that I was in Chicago over the weekend (Friday to Monday) and didn't have much extra time to blog. Or email. Or edit photos. Or sleep. But it was great fun and you should be able to read about the gut-busting eating soon on Serious Eats. He can stop whenever he wants to.

"I put your mail in your room," Lee Anne said. "You should go check it."

There were at least a gazillion signs, give or take a few, that something was being plotted for my birthday. All those times that Lee Anne asked me if I were free or planning anything ("yes" and "no"). That Diana, Erin, and Grace accompanied me home (after making a quick stop at Erin's apartment so I could borrow a piece of luggage) for what I thought would be a small pizookie party. That Lee Anne gave me a nonchalant nudge to go to my room for my mail, which she never does.

But my brain works in funny ways. And by "funny" I mean "sort of slow, like this sleepy kitty."

So I walk to my room with the intention of showing it to my guests, not realizing that I was being followed by no one. I bust open the door and see...darkness. Quite normal.

And then Ken's face. Which is less normal. Because he doesn't live in my room. And Greg's. And Tristan's. And John's. And Lihan's. And then I hear a crack accompanied by an explosion of rainbow confetti curls and a pained look on Ken's face because Greg aimed the confetti tube gun in the not-quite-right direction (that is, towards Ken), to Ken's detriment.

And then I sort of freaked out for the next ten minutes because 1) WHAT THE HELL, I THINK I ALREADY HAD A SURPRISE BIRTHDAY PARTY, and 2) WHAT THE HELL, you guys did this for me again? and 3) WHAT THE HEEEEYYUUULLL I don't deserve this, you guys. Not at all.

After my brain reset itself, I got to enjoy the typical party components. 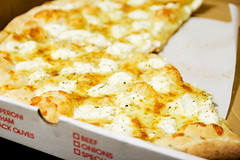 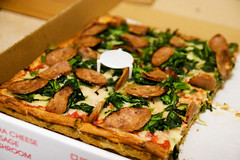 It ain't a real party without pizza, so Lee Anne made sure there was plenty to go around. The pepperoni was sadly neglected, so I made it feel better by stuffing a slice down my throat. Hooray! All pizza is welcome to die in my belly of stomach acids no matter what its topped with. John had read my post about my love of grape soda so he brought a few bottles for me. Aw! It was a funny little thoughtful thing that made the party so much better. Because it was enhanced by artificially flavored grape soda. 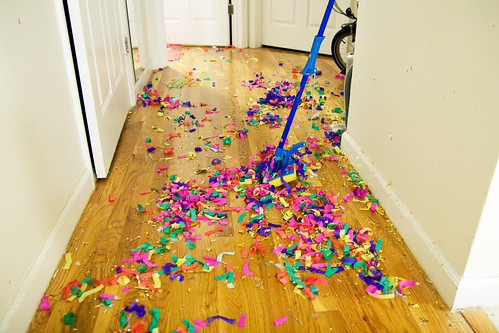 And then I realized I didn't have a broom.

It would've been a shame to let the pile of rainbow puke confetti detritus on the floor go to waste. So we didn't. I pretended to pass out on the floor with a bottle of grape soda. Festive! 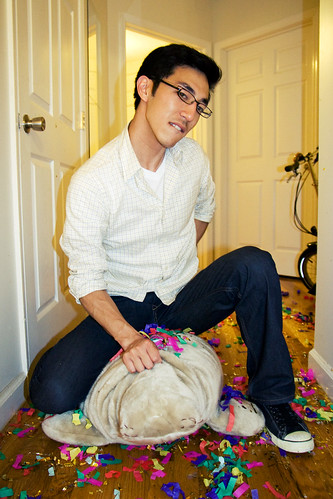 And...that's Greg. And a not so happy Giant Manatee 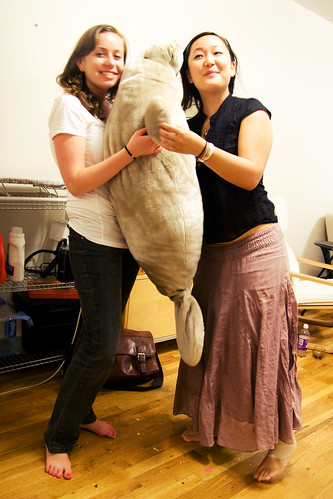 Erin and Grace do the manatee dance.

See, this is a much more acceptable way to interact with Giant Manatee. 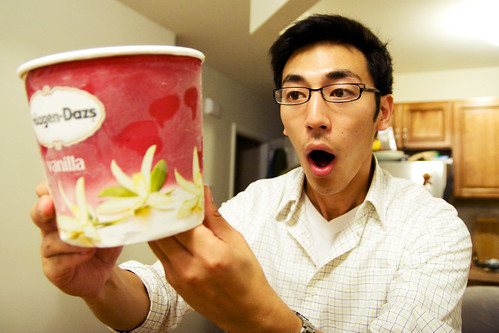 And then it was time to bust out the huge tub of vanilla ice cream, aka pizookie topping. It wasn't actually as big as my torso. 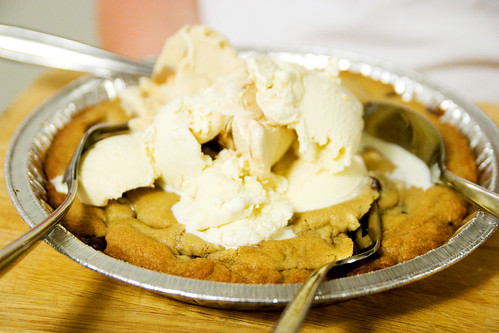 And then holyshit PIZOOKIE TIME! Lee Anne made the cookie dough from scratch! GLORIOUS COOKIE DOUGH OF SUGARY, BUTTERY GOODNESS. 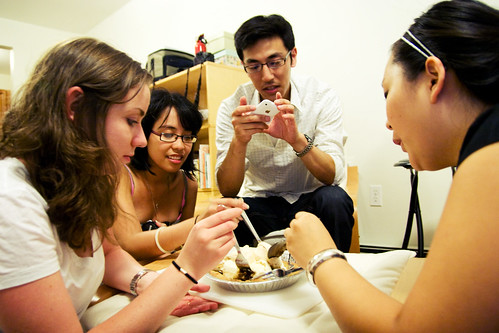 It didn't take long for everyone to dig into the pie tins of underbaked cookie dough topped with clumps of melting vanilla ice cream seeping into every gooey crevice. Crunchy, soft, warm, cool—it's got it all. ...Except whipped cream. Gotta draw the line somewhere, I guess. 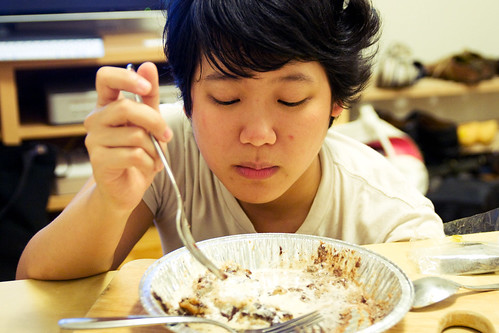 Even though I was stomach's-gonna-rupture stuffed, I kept going. It's too tasty not to. Also, my foolish 24-year-old mind is gonna milk my 24-year-old metabolism while it's still letting me eat junk like this without suffering grave consequences. A fuhjillion calories later, the pie plates were mostly cleaned out of their sugary fatty contents.

And then we all went into food comas. After taking this silly group photo. I punch my friends because I love them.

And that's how my life as a 24-year old (mid-twenties, guys...I AM NOW IN MY MID-TWENTIES) began. With. Giant Cookies. And. Awesome.

Thanks again to my amazing friends for coming out...and making a grand celebration out of my slow journey towards death! As usual, Lee Anne is a pro at surprising the 'boppy. ^_^

May it rain manatees...Oh wait, that would probably be bad.

Yea Robyn! Happy belated birthday! No cakey??? But a pizookie is just as special. :) You always seems more like a 'Leo' to me, although I'm a Leo, but i don't 'act' like one. Roar!!!

Ok, it's early in the wee hour and can't sleep, so I might sound a bit off. :P

(The photo of Greg with the manatee is just wrong though.... so wrong)

Marvo: Thanks! Yeah, we'd all die by manatee-crushing. ...And then MANATEES COULD TAKE OVER THE EARTH.

Kim: Thanks! I usually sound a bit off! We're like TWINS!

A drunken manatee? Robin, I thought you were more responsible. They are quite the lushes when encouraged. Happy birthday!

HAPPY ROBYN BIRTHDAY!!!!! I love the picture with the hallway filled with confetti. Really, all birthdays are not complete without a crapton of confetti.

happy belated birthday! i would have thought you all were going to the slow food pig roast while in chgo

Happy Bday!!! Wishing you lots of manatees and grape soda this year. But I agree with Su-Lin. That pic of Greg with the manatee is SO WRONG! Bad Greg.

maomau: Thanks! The only reason we went to Chicago was for our event at Blackbird on Sunday afternoon/night. So pig roast ...definitely not on the itinerary. Although it was probably tastyyy.

bionicgrrrl: Thanks! Manatees and grape soda! Such happiness. :)

Happy birthday! Tillykke med fødselsdagen! Bonne anniversaire! Looks like a great night. Relax, you're still not quite in your mid-twenties that's 25. Stay young (at heart) and funny and happy and safe and KEEP blogging - otherwise I'd just miss you too much.

I wanna be surprised like you one day. Only I don't have a Lee Anne in my life. :(

Happy Birthday!!! I'm glad it was such an ultra-rad day. Pizzookie is one of my favorite favorite desserts, too. If/When you come back to Phoenix, try the Pizza Cookie at Oregano's if you haven't already--it's by far the best. They bake the cookie in a small, dark, deep-dish pizza pan so the bottom of the cookie gets really crispy. *drool* It's the goldmine!

Mahar: Thanks! Lee Annes are hard to find, I will admit.. :(

Julie: Thanks! I have tasted the Oregano's pizookie and what a good taste that was. :)

What's on your shirt in those pictures Robyn? A bear wearing wings thinking about honey?

Yaaay glad to know someone else shares my love (aka obsession) for Welch's grape soda! Happy Bday :D

Angeline: It's a bear dressing up as a bee cos it wants honey. :D Threadless shirt!

HOME PIZOOKIES ARE THE BEST!