I could sum up my nine hours in Washington D.C. with one photo: My friends are so cool they levitate. In different ways.

But you probably need more explanation than that.

First, some back story. A month before our trip, Tristan alerted his friends to the Louisa County Ag Fair happening in his charming home town of Louisa, Virginia. You may recall our inaugural trip last year; now it has become a yearly tradition that gives us New Yorkers an excuse to get out of the city and hang out on Tristan's family's farm, surrounded by nature's loving bosom (trees, bugs, sheep, cats, corn fields, fresh air, a night sky devoid of light pollution, etc.) and Tristan's loving family (father David, mother Kris, lil' brother Fletcher) who always welcomes Tristan's friends with open arms despite the chaos we bring to their quaint home. It doesn't take much convincing to get people down there.

Alas, in the end just four of us could join him for the ride: Colin, Veronica, Olivia, and me. Which worked out for the best since 1) we're awesome, and 2) that's the maximum number of people who could fit into Olivia's car. Colin, Veronica, Tristan, and I took the Bolt Bus to Washington D.C., where the D.C.-based Olivia could pick us up and drive us down to Louisa, about two hours out of the city. But we had some time to kill time in D.C. before Olivia was free. And then the heavens parted and God said, "Even though you don't believe in me, I'm gonna do something nice for you. Heathen." And that he did: by giving me the gift of Karen Chow. Who is this Karen Chow, you ask? She's like, awesome. She's like me but 5000% smarter and cooler. She might be the reincarnation of a really cute bunny with a huge brain...and...neurotransmitters made of...cotton candy. I'd know because she's been one of my best friends for 13 years. In her golden presence, my brain goes all gooey with inhibition, which is probably why I have so much fun around her—it's like being drunk.

Oh yeah, wait, I'm not done. Luck/God was on my side because it just so happened that Karen had already planned to take that Thursday off, unbeknownst to her that I, along with my merry band of friends, would attack her like a pack of drunk leeches, at least 50% of which were wearing Keyboard Cat shirts (that is, Tristan and me), and want to dump our stuff in her apartment and make her act as tour guide for the day! SHE WAS SOOOOO LUCKY! I mean...WE WERE SOOOOO LUCKY. And so we did. With Manatee Puppet in tow. (That's it's name. It's a proper noun.) By "in tow" I mean "mostly on Karen's hand, making it all sweaty." Except when we perched Manatee Puppet on a bicycle. First stop was Matchbox, which Karen chose based on their sliders and proximity to her apartment. But it turns out it's a pizza place too. Pizza and burgers for lunch? Yup. 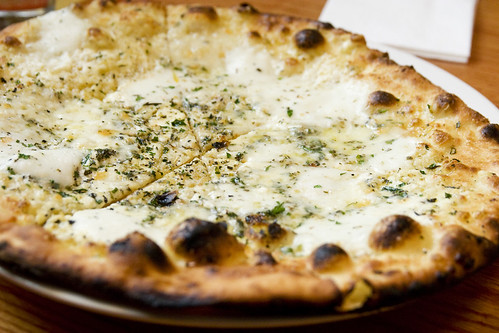 But before I get to the sliders, let's talk about this pizza. (If Adam is reading this, it will soon become obvious that I couldn't muster up much to say about the pizza, but I'll try to come up with something more for Slice.) It's. Um. You can't tell from looking at it but it tasted like the crust was soaked in butter. Otherwise it didn't have much flavor. Or a very appealing texture. And despite there being four cheeses on our pizza, it didn't taste all that cheesy. It was somewhat odd. I'm not sure what else to say about it, THE END. The sliders (we ordered a plate of six) with pickles and gouda in toasted brioche buns fared better, partially because they were topped with a honking huge pile of crispy, salted fried onions, and you know what they say about fried stuff: a big pile of it on top of something else will probably make the other thing taste better. Not because it imparts any flavor on the non-fried substance, but because the deep fryer grants it tractor beam-like powers pointing towards your mouth. 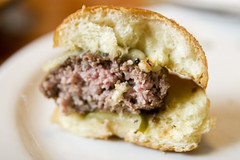 The sliders were better than the pizzas. Although far from oozing fatty goodness, the patty was moist enough considering how bite-sized it was. And, like the pizza crusts, the starch component of the sliders were buttered or slicked in some sort of fat. Unlike in the pizza crusts, this was a plus. You wouldn't go out of your way for these burgers, but they're not bad. I wish they had come on potato rolls though.

We had to wait about 30 minutes to get a table at lunch time on a Thursday. Considering how huge the restaurant is, that's some good business. While the atmosphere is pleasant, I wouldn't say it's worth the wait, unless the rest of the menu is pretty awesome.

And, on a random note, that being my first time in Chinatown, or whatever semblance of Chinatown Washington D.C. tried to create, my reaction is: WTF? All stores in the area are required to have Chinese signs—Starbucks, Legal Sea Foods, Dunkin Donuts, and the like—to preserve the Chinatown feeling. Because, as everyone knows, Chinatown is supposed to feel like an outdoor mall with awkward Chinese characters plastered all over the place, catering to the local dominant Chinese population that isn't there. It's funny and strange at the same time.

It's Wandering Around Time 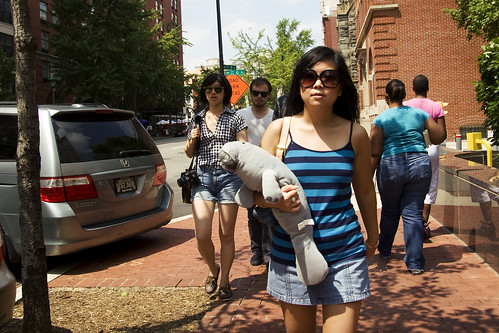 Karen. And Manatee. And stuff.

Before we could eat again, we had to give our stomachs a rest. And thus Wandering Around Time commenced. 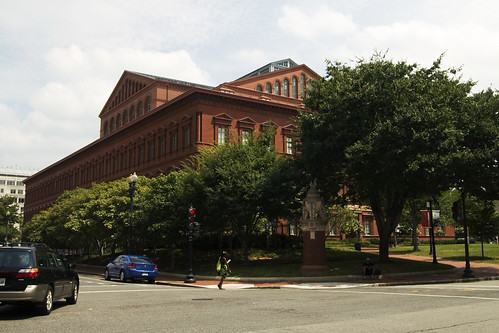 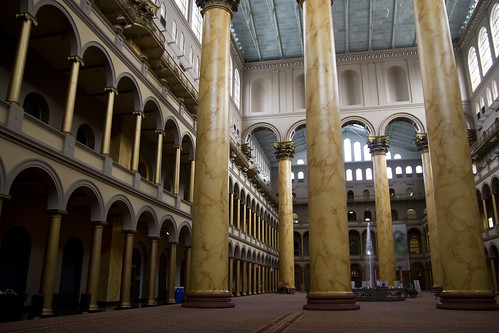 We escaped the humidity and heat by browsing the National Building Museum for a bit. Appropriately, it's a quite beautiful building. Alas, I was unable to define the beauty in terms more elegant than, "Those columns are like...giant...fat sticks," so thank god for the magic of photography. There was also this sculpture. What Tristan and Colin found out by climbing on it is that metal get really hot when sitting in the sun's rays for prolonged periods of time, and that when really hot surfaces come in contact with human skin, pain ensues. There was also this flaming skull license plate. The baby seat in the back told us, "At least one kid in this world is gonna grow up awesome." Rainbow fish are cool. On that note, I'm glad i"m not rainbow-colored.

We moved on to the National Museum of Natural History where we looked at cute fishies. 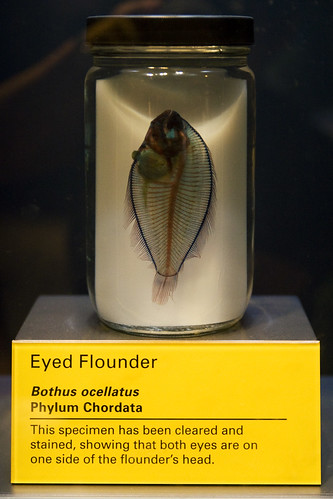 Man, that fish is a freak. 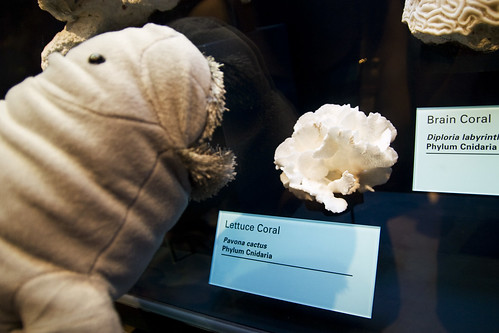 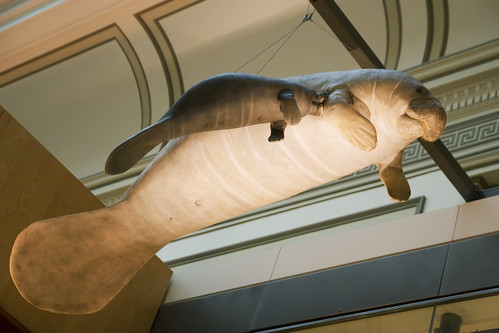 AND MANATEES. FLOATING. MANATEES. LIKE IN REAL LIFE...I mean, not like real life. Not even close. But a girl can dream.

Then science time was over. To make way for... 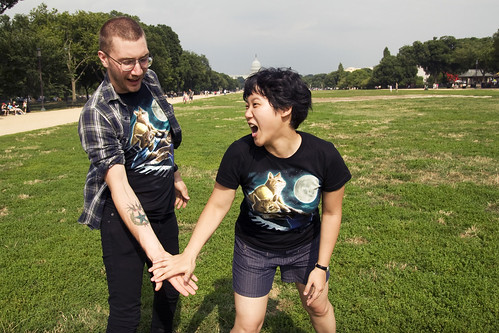 Ain't no better way to give props to our nation's capitol by giving your bestie a low five while you're both wearing matching shirts depicting a mash-up of Internet memes. 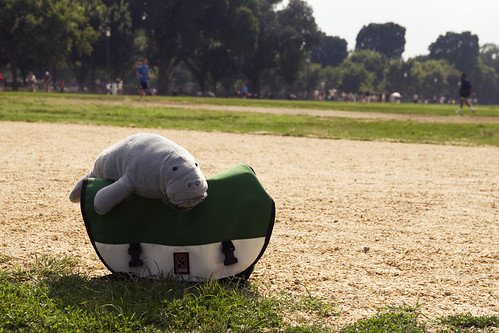 Toys need to rest too. 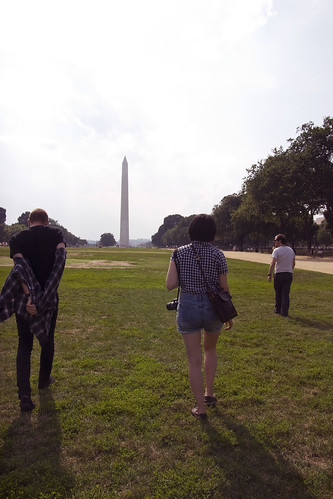 Our cavorting ended with a sweaty walk towards the Washington Monument. To be followed by MORE FOOD. Coming in Part II.

That puppet is really quite accurate since manatees really do have odd prickly whisker type things that wriggle and grab things.

The pizza crust sound like it could have made a really good pizza. Shame the toppings let it down. Perhaps their tomato sauce hold the magic of flavour?

The food looks great, especially the pizza. And the mound of fried onions things? Nice.

Ah yeah, I checked out Matchbox earlier in the summer. The tuna tartare appetizer was tasty and refreshing... but the prosciutto white pizza was basically the opposite. It, like yours, suffered from sog syndrome, forcing us to *gasp* eat it with knife and fork! But the kalamata olives and prosciutto gave it some flavor, so I wasn't totally disappointed. I'd only go back if I could cite it as a departmental charge again. ;)

Are you still there? You should REALLY go to Oyamel. Amazing Mexican. Matchbox is over-rated. I got the sliders and my fried onions were cold and the burger got all the oil from the onions soaked into the bun. Not that appealing.

SuperChomp: CHEESE IS SUPPOSED TO BE MAGIC FLAVOR FILLED [weep]...I mean. I dunno if anything could've saved that pizza. Weird crust. Hm.

Dan: Alas, I've been back in NYC for weeks. No more DC eats for me! Until my next trip, which I should take this fall. Thanks for your rec!

My sister moved to DC a few years ago, and I remember the first time that I saw it, I wasn't quite sure if I was supposed to laugh or cry at the dismal sight of it.
On a side note, I'm looking forward to see what other foods you're going to eat that will hopefully be better than Matchbox so I can drag my sister to them next time!
And if you're looking for a good burger place, Ray's Hell Burgers is amazing!

i love that manatee puppet looked way excited to be in the natural history museum. next time you're dc we have to go to 2amys. it will make up for your inexplicably buttersoaked pizza.

i luv your blog, you're so funny:)

Annie: I went to Ray's! And loved it!

Mm yes, must get GOOD PIZZA!

aww too bad the pizzas LOOKED promising... hehehe.. is that the matchbox menu? made out of wood? it's sexy...

um, you're wearing the wolf shirt. BEST SHIRT EVER.

miss tiffie: Yup, the cover was made out of wood! Quite nice.

Next time you go to DC, try Dino in Woodley Park, near the zoo. It has amazing Italian food and GELATO.

okay, so you are one of the funniest people i have had the privy to find! Keep it up girl!

Lauren: Thanks for the rec! I loves me some gelato.

Jodi: Thanks for reading!

that first pic of your friends is absolutely adorable. that pizza looks so freakin' good. i've never spent much time in D.C. - maybe it's time.