Hand pulled noodle shops have fast become one of my favorite places to go to. Not any one particular hand pulled noodle shop—although Lam Zhou is my most frequented spot—but all of them. Or at least, the dive-iest ones. Because they're magical places where mounds of dough are transformed into bowls of noodles and pork dumplings are plentiful and you can have it all for questionably low prices that make you wonder how these shops make any money. 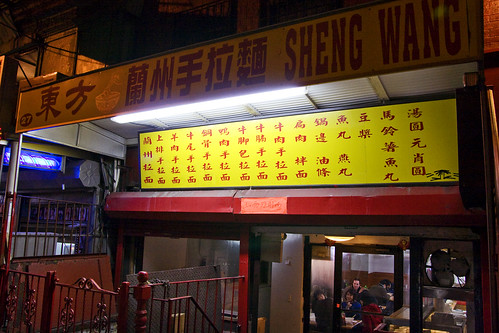 Two Saturdays ago after attending ROFLcon with Diana, we met up with Kathy, Greg, and Jessica at Sheng Wang to expand our hand pulled noodle repertoires. Aside from hand pulled wheat noodles they also offer bean thread noodles and rice noodles for the gluten intolerant crowd or anyone else who doesn't want the stuff being freshly stretched just feet away from them. 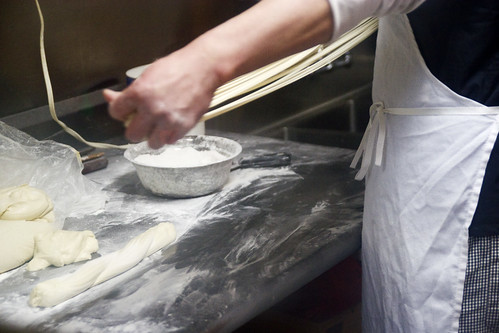 There's a little window that looks into the semi-enclosed kitchen so you can watch the birth of your noodles from the chef's skilled hands. I annoyingly oohed and aahed as Greg shot a video, thus ruining his audio (sorry, Greg) with random, incomprehensible noises—because my oohs and aahs sound less like that, and more like eeuhha and mweuhhehe. I make cartoon-like sound effects without even trying. And that's probably not a good thing 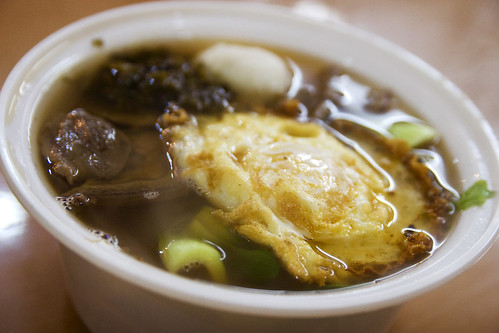 My beef hand-pull noodles came with fat slices of beef, a smattering of bok choy leaves, and a Fuzhou-style fish ball. For an extra $0.50, I added a crispy fried egg. It's hard to knock on a huge bowl of noodles and extraneous goodies that only costs $4.50, but my first impression was that the soup didn't taste as flavorful as Lam Zhou's, a problem that was partially ameliorated by a few long squirts of sriracha for tingly goodness. The beef was a bit chewier than I would've liked, unfortunately scoring below Lam Zhou in level of tenderness. The rest was fine as far as I could tell, noodles being of the regular soft, mildly chewy, not springy sort. 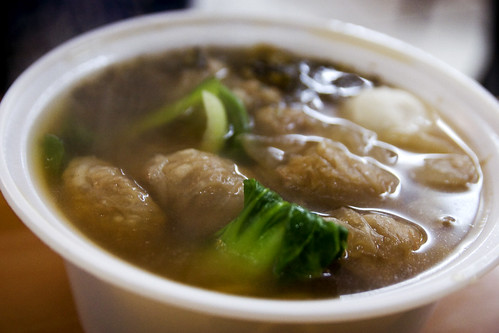 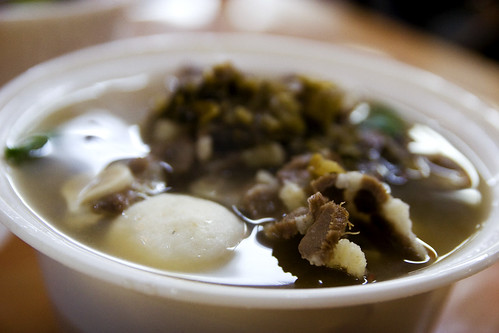 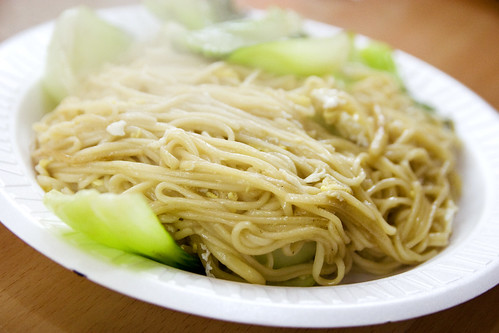 And fried hand-pull noodles ($3) ordered by Greg. While the prospect of "fried" initially sounded like the most intriguing choice on the menu, it ended up being the most boring. Visions of long, deep fried noodles (well, that was my vision...the same vision that fills most of my daydreams) were shattered at the sight of the soup-less, meat-less, noodle mound that wasn't deep fried, but pan fried. Ooooops. I need to stop thinking that "fried" equates to "dunking into giant vat of bubbling oil." 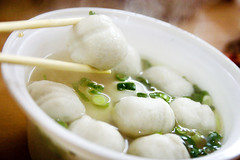 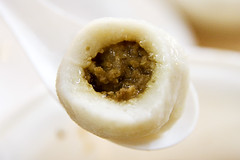 Of course, we also shared a bunch of dishes. The sproingy fish balls (large, $3) had double the meat goodness—bite through the thick, outer layer of mashed fish matter and you reach the juicy, porky center. 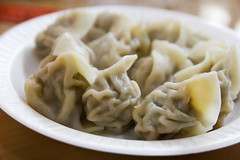 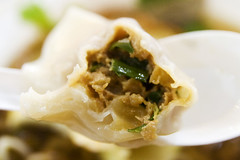 Steamed pork dumplings (12 for $3) were also meat-packed and juicy, packed into a thin wheat wrapper. 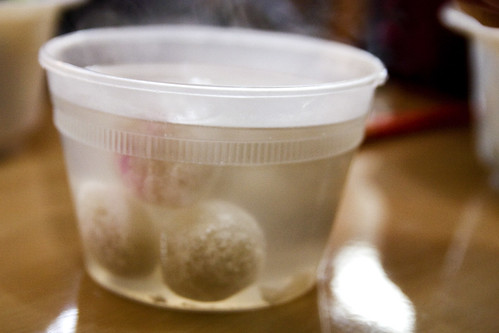 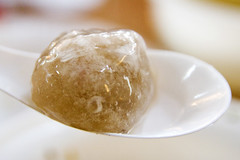 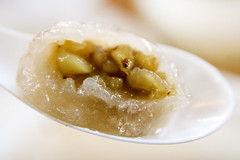 We finished with what is named broth bun ($3) on the menu but is actually sweet, glutinous rice dumplings filled with sweet goo and coarsely chopped nuts, bobbing in a tub of clear liquid that inexplicably (or not so much; feel free to explain it to me) tastes like bubble gum. Every bit was unexpected—the resilience of the chewy, semi-translucent skin, the abundant nut matter (what kind of nut, I wasn't sure; I'd usually say peanut but it either didn't taste like peanut or my taste buds weren't working), the perfume of...bubble gum. Oh, and that it didn't at all resemble what I would call buns of broth. But it's still good, and now you know what to expect so that when the tub of brownish globs is plopped on your table you don't think, "What the...hell did I order?" Which was my first thought. 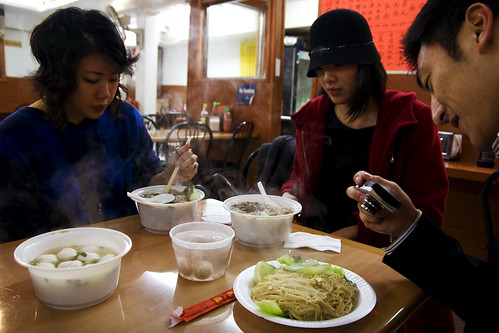 I'd go back for the fish balls and dumplings, but I'd rather go to Lam Zhou for noodle soup. I just wish Lam Zhou—or any restaurant for that matter—also offered fried eggs as an extra; adding a fried egg with the potential to unleash a rivulet of yolky goodness to anything tends to make it taste better. Update (2/2): Lam Zhou will give you a fried egg if you ask! Thanks to bionicgrrrl for the tip. 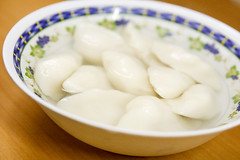 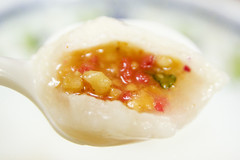 The sweet rice dumplings from Lam Zhou are similar, but mostly a different beast from Sheng Wang's version. They're the more typical half-moon dumpling shape instead of spherical blobs, the skin is much softer (if anyone could tell me how the different doughs are made, that would be swell), and the peanuty filling is just a bit more finely chopped, contains more sugar granules, and features a wider range of artificial colors. What is the artificially colored stuff? I...don't...know.

Goodness, I didn't realize how big the bowls were until I saw the 3rd to last photo! How DO they make a profit if they give you that much food for such a low cost?! I guess that's just the magic of dive-y noodle shops. ;)

Lam Zhou does offer fried eggs. Last time I went, my bf asked for noodles with soup but no meat, and the nice lady there asked if he wanted a fried egg on top, which he got. I think she thought he needed more protein. Ask them next time, I'm sure they'll throw one in even if you get a noodle soup with meat.

huicheol: Yeah, it's a..lil bucket they give ya. More than anyone shoudl eat for one meal!

bionicgrrrl: Sweet jebus, thanks for the info! I'll add it to my entry. I guess it never hurts to ask, I just didn't see it on their menu. I'm gettin an egg next time!!

The "broth buns" remind me of the "crystal buns" that they have in Beijing cuisine, but I'd never seen them in soup before, while the Lam Zhou dumplings look more like traditional "tangyuan" (http://en.wikipedia.org/wiki/Tangyuan) except those are usually round, not dumpling-shaped.

I looked at a couple of websites to see what the difference was (but most were written in simplified Chinese, which makes my head spin), and while the latter is always glutinous rice flour, the former can be water chestnut flour or a mixture of glutinous rice flour and wheat starch ("tang" flour).

Ok, that is wierd, we both went for hand-pulled noodles at the same time, in two different cities.

There's aren't any divey noodle places around here, because they'd probably all get shut down by the health authorities, which I almost think is a shame. London's Chinatown would certainly never allow a real, traditional style Chinese street cafe. I want hand-pulled noodles too :(

Hey Robynn, this is weird. I just had my beef noodle and chives & pork dumplings cravings last week. Been having them for lunch and supper everyday since last Monday. How I wish Boston has more hand pulled noodle places to go to. Lucky you!

Ok I'm ready for moving to New York, if only because of the noodles... Mmmmmmmmmmmmmm Mmmm

I LOVE Fuzhou fish balls... Sproingy is right - and meatastic!

I wish there were more hand pulled noodle places by me...or had easier parking.

I've never seen that wonderful combo of fish ball and pork filling... if I get ahold of some fish paste, I ought to make it.

Vincci: "Crystal buns" sounds like a much more appropriate name. The mix of wheat starch makes sense...as for why the skin was chewier and whatnot. Thanks for the info!

FN: OMG WE ARE CONNECTED! By noodles.

SuperChomp: You should come to NYC. Not too far!

Reese: I ALWAYS HAVE CHIVES AND PORK DUMPLING CRAVIIINGG!!! But I don't eat them often enough.

Karen: There are many reasons to move here. And at least one reason not to: freakin pricey rent. :(

Manda: Or come to the land where you don't need to drive! Weee.

Su-Lin: Damn, I never thought of making it before. Mine would probably come out wrong. :P

Ahh.. those fu zhou fish balls are the best. I wish I could read chinese and buy them from the grocery store... alas, super fail.

The great thing about these hand-pulled noodle places is that they sell their dumplings frozen. 50 for $8 dollars. It's super sweet.

Okay, it's 10:06 AM here and now I'm hungry for super mega huge fish balls and dumplings. >_
I'll just finish my coffee and go on a dumpling hunting trip then...

How lucky to have a place where you can watch them prep your noodles. I've only seen it online and on television. I want to stuff about 50 of those fish balls in my face right now. Mmmmm.

>>"Lam Zhou is my most frequently spot"

That's a table full of happy right there. I like fried noodles with dumplings. Hell, I love it ALL!

Danny: MY GOD I NEED TO BUY THOSE DUMPLINGS.

Jenneke: I hope you got your dumplings!!

Oxen Cox: 50 fish balls in your face...sounds like a CHALLENGE.

Jesi: UHHhhhyeaahuuhhh..that's what I meant...no one saw anything (sticks hands in pockets, whistles)..

Man I need an editor.

i think you just need more sleep :) [i read your twitter, you always say you are sleepy!]
im an excellent editor by the way [despite what my all lower case, extremely lazy comments might indicate], with experience ;) i would totally do it.

okay, you convinced me. i'm going there.

DAMN IT why don't I live in New York?!??!?! WHY doesn't Chicago have such authentic goodies?? Literally, I thought you were on the streets of Hong Kong when I saw all your pictures. I fooled myself into believing that I've seen that vendor before and ordered those dishes at the same place. *sigh* THANK YOU for posting and sharing your great eats. I am so jealous!

Wow, great post and blog!
I only blog about my (mostly aweful) lunches here in Norway. Found you trough the Lay Gastronomer.

Check my blog out, not as tasteful and classy - but very real...

Michelle: Chicago seems to have some good stuff too!...no hand pulled noodles though? Doh. And someday I would like to be on the streets of HK.

Lunsj: I would love to read about your mostly awful lunches in Norway. I LOVE..WEEGIE..THINGS.