There's something about coming across a small, nondescript restaurant in a somewhat grody part of East Chinatown that makes my heart go all a-flutter. With happiness—not cardiovascular disease. It's that burst of wonder mixed with excitement, like when a five-year old meets Mickey Mouse for the first time, unless he's scared of people in ginormous costumes, in which case he'll probably cry and make a scene. Those are the kinds of kids who should just stay home. 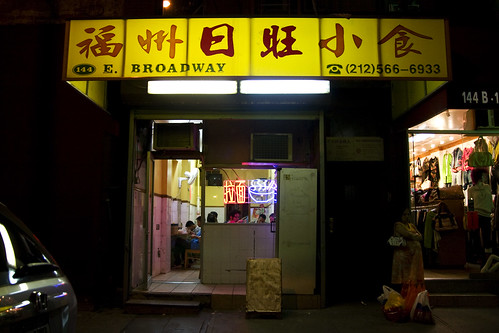 Nam Zhou is one of those small, somewhat nondescript restaurants. Although the street may look grody, the restaurant is less so. It may not sparkle, but it's clean enough, brightly lit, and lacks the tacky decorations that plague many Chinese restaurants. Nick and I came for two things: hand-pulled noodles and handmade dumplings. Not that we had other choices—that's pretty much all they make. 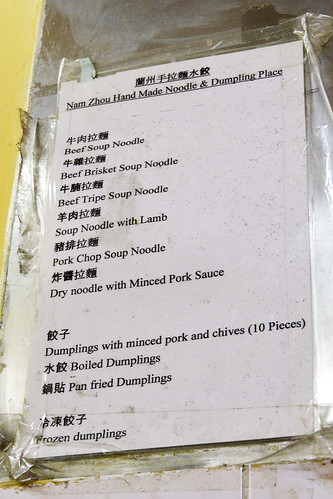 You can order hand-pulled noodles in soup with beef, beef brisket, beef trip, lamb, pork chop, or dry noodles with minced pork sauce. Dumplings only come in the classic pork and chives (my favorite), boiled or fried. There was also an entirely Chinese menu, probably with more choices than what was on the English version. If only I could read Chinese; then I'd be able to read those elusive secret Chinese menus. That, and communicate with millions more people around the world. (I bet a lot of those people know English though. I'll keep to my useless monolingual path.) Nick and I each got our own bowl of beef brisket noodle soup, which came with huge chunks of tender stewed beef, bok choy leaves, and chopped green onions in a spicy, meaty, aromatic broth. 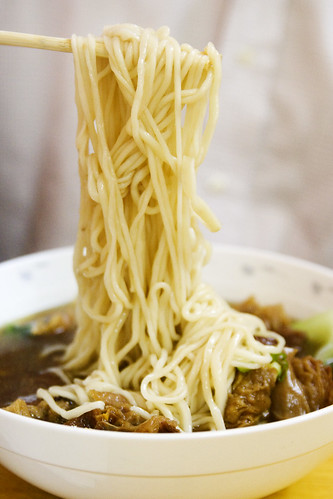 AND NOODLES! DUH! Check out those noods. Super long, round, slightly chewy, medium-thick strands of wheat noodles. They sometimes varied in thickness—unavoidable when created by the dough-slapping power of one trained noodle-making man—but were mostly uniform. Although I prefer springier or more al dente noodles/pastas than these handmade noodles, I would count this as one of my favorite Chinese noodle dishes (most of which are rice noodle-based). 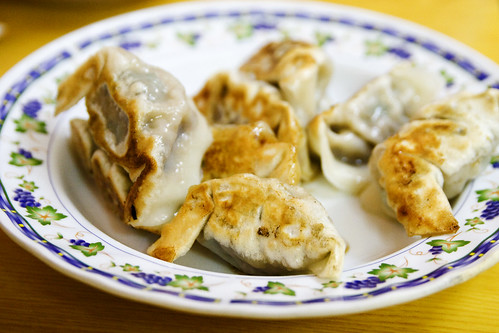 Fried pork and chive dumplings were thin skinned, crispy on the bottom, and well stuffed with juicy porkness. Can't go wrong there. It also comes in a nifty wine grape-themed plate. 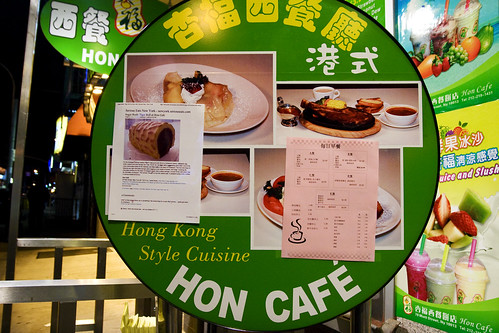 While walking back to the subway station, the sign for Hon Cafe caught my eye. On the left was Kathy's review for their tiger roll! Sweeet! 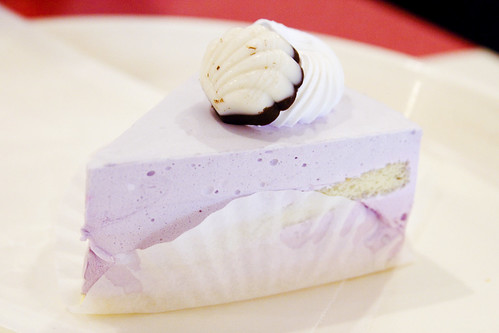 I did end up trying a tiger roll at Kathy's recommendation, but also a taro cake since it looked appealing. Sadly, it was a big fat fail, possibly because the cake had gone semi-stale at that point, or maybe it would've sucked from the first place. What looked like a light mousse had congealed into something kind of marshmallow-y and jello-y and developed an outer shield of elastic skin. What...the...no. 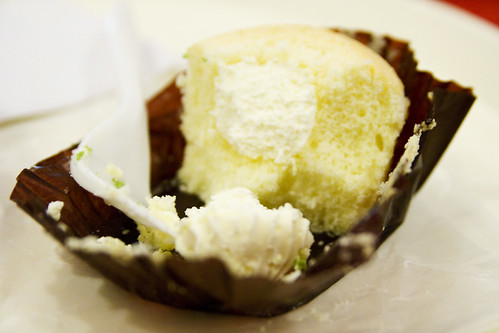 On my previous visit to Hon Cafe (the one where Kathy tries her tiger roll), I had another bad experience with their pudding cake, which barely fulfilled either part of its name. The cake was dry, seemingly halfway to being cookie matter, and the "pudding" was just the smallest dab of a semi-solid whipped cream-like substance. As far as I could tell, there was no pudding nor cake in that pudding cake. 'Twas a "pudding" "cake."

But the tiger roll is fine. I think I just have bad luck when I go there.

hey robin, next time you could try the dry noodle with mince pork sauce. it's my favorite! it's like spag bol only saltier, beanier and porkier. make sure they give you lots of shredded cucumber to off-set the saltiness.

I walked by that joint a million times. Damn, I wish I'd known there was rockin' noodles in there.

the fried dumplings remind me of the movie 'Old Boy'

rhianna: Saltier! Beanier! Porkier! I will definitely get that next time.

EB: I definitely had never walked by it before. And if I did...I probably would've just passed it too. :P

Jane: Oo, I haven't seen that. Did I just fail?

Those dumplings look awesome. I was looking for somewhere to go to lunch today, thanks - now I know have somewhere.

Those noodles look pretty awesome. Hand pulled ones (if done well) are just to-die-for. It's a shame they couldn't get them more "sproingier" ...with real bite and bounce.

You know, I wonder about bakeries. I've always had problems with Asian bakeries and their pretty cakes. The turnover on breads seems to be good, but those cakes might sit in the display fridge for how long?! And not just Chinese bakeries even when I walk by Trois Pommes in Park Slope, I wonder the same thing. They don't throw shit out at night and I know this because I walk by at night and if they threw things out, I'd eat it outta the garbage bags! So yea, bakeries sometimes have stale goods.

Oh gosh, now I want noodles more than anything. That always happens when I see them. I need to work on averting my gaze. And I hate when desserts fail, especially taro desserts. Your description of it sounds like a bad Cool Whip dessert or like old ambrosia.

it;s near 4am for me here and i'm craving for 'Dry noodle with minced pork sauce' ;(

Hey Robyn, if you see any Chinese menus you're interested in, why not take a photo? I could try translating it for you. And I'm sure one (or more) of your other readers is actually fluent in Chinese.

Superchomp: Taro cakes should never be made of fail. I JUST DON'T KNOW!

Danny: I tend to stay away from cakes in Asian bakeries so I didn't know how stale they can get. :( Better off sticking with buns, eh?

shukumei: Oh yeah, I totally forgot to take a photo...doh. My mom could help me translate it. :D Next time I shall photo!

you should try the knife cut (dao xiao?) noodles - they're thicker and much chewier than the pulled ones. like little slices of heaven.

Marie: Consumed, I DID.

Pamela: Oohmmygod I want those! Do you know where I should get em in NYC?

you can usually get the knife-cut noodles at the same places that have hand-pulled noodles. i like super taste (on eldridge street) - try the spicy beef soup with knife cut noodles and their dumplings - i promise you'll like them!

Funny, I was just there, too! I have a photo of the Chinese menu and will post shortly for assistance in translation ;).

Pamela: Thanks for the info! I'll try to check out Super Taste in the next week or so. I NEED MAH NOODLES.

Tam: Awesome! And maybe we should do hand pulled noodle hunting. :D

Oh my, everything looks so yummy!!!

You take lovely photographs of food, your macro shots are so clear!!!

mm.. the noodles look good. Glad you found a local place that's good.. The menu taped on the wall looks like it's been there FOREVER. :)