Note, re: previous entry's note: I totally didn't go to bed before midnight. I feel like fail. 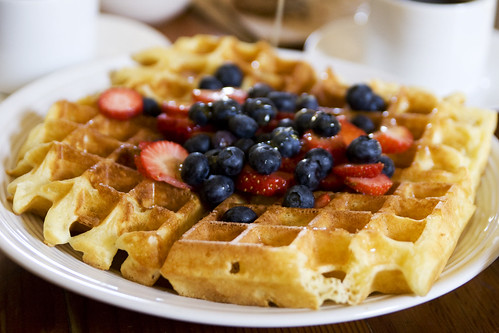 Bask in the radiant glow of these waffles. Bask.

There's no point in ordering waffles at a restaurant from this point on knowing that Greg can make The Best Waffles Ever. For free. I mean, there is that small exchange of allowing him to make fun of me and guffaw at my infantile behavior, but then I get to eat DELICIOUS WAFFLES!!!! (I excuse myself from waffle-making duties because I don't have a waffle iron.)

What do The Best Waffles ever taste like? Lightly crisp. Lightly sweet. Lightly...light. The whipped egg whites turn what looks like a normal waffle into a crispy wheaty pillow laden with golden edges begging to be crunched through with your fork and full of pockets perfectly fit for blueberries and syrup and whatnot. It's beautifulllll. Never before had I encountered such a bliss-inducing waffle. 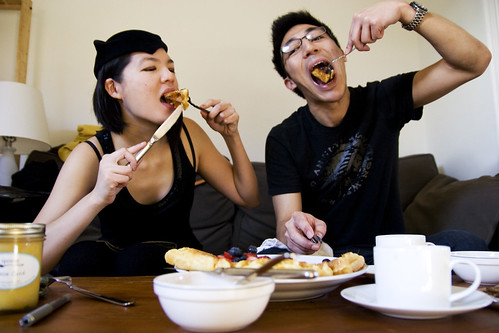 APPROVED! By Kathy and Greg.

Three out of three Asians approve (Me being the third. Not some invisible Asian person.)

Greg didn't give me the recipe, but he said I should be able to find it with the magic of Google. So I Googled. ...And got a bunch of recipes that were similar, but not the same. This one from Recipezaar sounds most promising though.

Even though these waffles initially feel feather-light, they will, like any other food, eventually compact in your belly. We went through at least four of them. Or five. You lose count after a while.

While I may not have tasted your waffle-y goodness, you can count me in as "approved by four out of four Asians" because I have not yet met a waffle I haven't loved. Waffles with butter, syrup, fruit, whipped cream, chocolate chips -- the possiblities are ENDLESS, I tell you! Endless!

PS: I'm totally down with being the "grasshopper" to your "sensi" when it comes to the enjoyment of gelato. Shoot me an email about how your schedule usually looks like, we'll talk :)

Heck, those waffles look amazingly amazing! (That's a whole heck of amazing) Fed Ex me some?

Look for Emeril's waffle recipe on foodtv.com. Its the same thing, you whip the egg whites and you fold it in the end with the batter. The recipe calls for cake flour too. Also, every waffle maker cooks differently, I have owned 2 ever since I found the Emeril recipe. But the advice is not to follow the waffle maker's signal of when the waffle is done but to use your own judgement. Usually it takes 3.5 minutes or until it is golden brown and crisp.

Here's the recipe! When I said "everrrrrrrrrrrr" I meant "I mean ever!!!!" So if google "the best waffle recipe ever..and I mean ever!!!" you should come up with it. That's how I ran across it. Or here's the link:

Epicurean: Greg's waffle maker seemed to be made just for these waffles...or when it beeped, the waffles were nice and golden. :)

I updated my entry with your link. Weee.

OMGZ! i finaLLy got to see Kathy's eyebaLL hat!

oh god i just totally despaired because im out of waffles, after that night when i ate like four in a row. i know they're frozen waffles and nothing like those gorgeous ones you had, but i wanted some approximation... *weep*

Wow. I wonder what I can make out of waffle batter that isn't waffles... *doesn't have a waffle iron*
Meringue egg whites for waffling sounds like a top idea though.

(now, in my head, I'm saying wah'ful instead of woh'ful @_@ The word has lost all meaning)

Yum! It looks good and clearly it is being enjoyed! :)

Alice: The super expensive hat! It looks cool on her though.

Jesi: Frozen waffle..probably still better than no waffle though, eh?

Juliet: They might be hamming it up a bit for the camera...but I'd say it was very much enjoyed.

I just had a bacon waffle for breakfast! It's one of my favorite combinations, crispy bacon bits enrobed in waffley goodness.

Thank you so much for this post! I made this on Sunday for brunch and they are truly the best waffles ever! The key is to NOT overmix. These babies were absolutely perfect; crunchy on the outside and light and fluffy on the inside. YUM!

Mila: Damn, I've never had that before. Pork waffle. Mm.

My mother has been using the same waffle recipe for about 45 years, I think it is known as the Stay-Crisp waffle.
Hers has some sour cream in the batter.
I don't know if the recipe is on the internet, but perhaps this one is not too different
"http://www.ichef.com/recipe.cfm/recipe/Best%20Ever%20Pancakes%20Or%20Waffles/itemid/110937/task/display/recipeid/96164/recipecategoryid/37"

Waffles are the best!

Lisa: Thanks for the recipe!

Thank you for sharing this recipe! I myself don't partake in waffle consumption, but I know plenty of people who do, and I love making delicious food for others ^_^

Also, you captured a really great image of your buddies chowing down on their wonder-waffles! But I'm not surprised because your photography is always tops!

Samantha: Thanks! It's easy to get good photos of people eating waffles cos they're so HAPPYYY!

Waffles look delicious...here's a yummy waffle waffle I had from Wafles & Dinges although yours look much healthier :)

No question about it, the texture is the best outcome I've ever had! I do find the taste rather flat though. I will experiment with the taste and hopefully the texture will remain the same. In the past I made a waffle recipe with the addition of malted milk powder (Carnation) and the taste was incredible but texture wise doesn't come close to your recipe.