My lapse in blogging is the fault of a weekend full of Alex, Jerome (a plush toy), Giant Manatee (also a plush toy), loud music, shouting over loud music, seeing many friends I haven't seen in a long time, and ice cream.

But you'll hear about that later. After I'm done editing all the photos.

First off, this lil' food blog nugget/shard/scrap was mentioned in last week's South China Morning Post (thanks to Verena for the heads up). The shizzzz! That'll look good on my resumé, right? You can read the article here, or, more easily, by reading it on my Flickr (thanks to Charlotte for the photos). According to Susan Jung, I am pesky and lovable. That can go on a resumé too.

Last month was low on blog posts. :( I'm disappointed with myself. You should be too. With me, not yourself. I blame this partly on trying to cram four seasons of House into two months to catch up with the current season. I succeeded, learning in the process that being addicted to TV shows is incredibly time consuming. I also blame the low blog post count on eating out a lot (yeah, still doing that) and working in a way where the same amount of work takes longer now than it did before. I think that's called "being inefficient" due to "brain cell depletion."

But I still write at least one weekly review on Serious Eats: New York. While I know some of you read Serious Eats, I figure there are more of you who don't. As much as I'd love to believe that once I write something on Serious Eats I'll still feel compelled to write about it for TGWAE in a more relaxed tone laced with more colorful language, like "poop," I'm generally too lazy to do it. Here are about two months of entries for those who don't want to sift through Serious Eats: New York (even though you should be reading it if you live in New York City!): 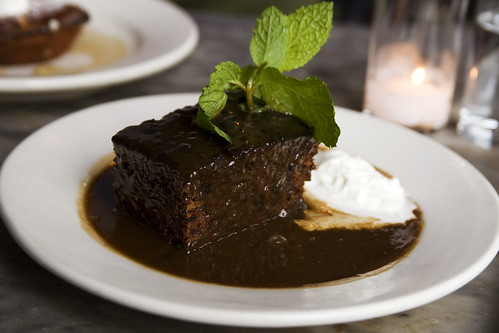 Date cake! I LOVE YOU!

Not including No. 1 East Restaurant on my best vegetarian eateries list was kind of dumb. I should revisit that.

I'm glad the South China Morning Post is in English. Although now I'm wondering what the Chinese word for "pesky" is.

date cake ruvs u back. sleepies~!

You welcome, Robyn. How can I not share some good news like this with you? Thanks for naming me too ... hee, your blog entry might look good on my resume as well. ^__^

(And I guess the Chinese word for "pesky" can be 麻煩.)

If you eat an unhealthy amount of sweets, then I'm the sugar queen. Actually, I sometimes think I am the sugar queen, especially after I fall into a sugar-induced coma. Anyway, congrats on the mention! I heart your made-up words!

I'm amused that I unwittingly co-stalked you yesterday...

Inspired by your Paris posts, I went to Pierre Herme for some macarons. They were delicious and then some. I tried several, but the one that stood out had a chestnut and green tea filling. I ate it before I got a good picture of it so I can't share :( oh man, I'm due for another paris trip soon, or a mail order box!

I just went on the Pierre Herme website. They don't deliver to the US * single tear *

hahaha, HOW did you get through college sober?

Marvo: Verena a few comments down seems to know! Of course, I KNOW NOTHING.

Alice: I didn't get enough sleepies. I got some bug bites in my sleep and was up scratching. :(

Verena: You are officially the Hong Kong TGWAE correspondent! ;)

Jeannie: Oh my god that chestnut one is so good and I don't even like green tea that much. But I do like chestnut a lot. It's better than you think it would be, eh? Yeah, no mail order...all the more reason to go back.

Amy: Maybe that's why I disliked college so much?

that must be it! also, can I be your alcohol correspondent? :-P

Susan Jung here (I've commented before on your blog as susan in HK). I really do enjoy your blog, and I would have loved to have you as a kid sister - you seem like loads of fun - and you're extremely funny.

Amy: HAHAHA...maybe you should start an ALCOHOL BLOG.

When I think "pesky," images of Elmer Fudd and Bugs Bunny come to mind. Definitely not what I think of when I think of your blog. Perhaps more perky than pesky, but definitely lovable.

This cake is incredible I remember that the first time that I tasted it it was in a friend's birthday and it is absolutely amazing.