If you don't like Momofuku Ssam Bar, you're with the enemy. Or you're a vegetarian/vegan, which is perfectly fine. Except that you'll never be able to appreciate the goodness of pucks of deep-fried pork fat, or tofu cubes deep-fried in pork fat, or pork laden with pork fat. I've accepted the fact that I probably won't live as long as you will, and I'm at about 95% peace with my pork-loving self.

On all previous visits to Ssam Bar I had ordered the bo ssam, my favorite slab of pork matter in the history of the universe and the universes of my unborn great20 grand children and their alien pets. But on my last visit about three weeks ago, I didn't get bo ssam. And my taste buds didn't suffer for it. Don showed me the light, which is, "Ordering a lot of things at Ssam Bar—half the menu, perhaps—is the way to go to achieve optimum gustatory pleasure." This is assuming you have at least six people to share the food between; otherwise your liver will be like, "Oooh, WTF mate" (if your liver is Australian). So in honor of Londoner Su-Lin's visit to NYC, she, three of her colleagues, Don, and I ate a buttload. Observe. 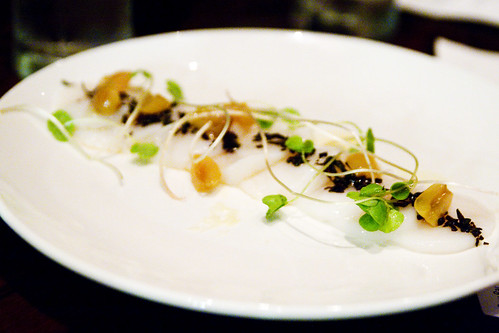 Diver sea scallops with pickled cherries, lemon, and sprouts of some sort: Mm, tender, sweet chunks of the sea, you are delicious. As scallops aren't one of my favorites foods, I would never order them on my own will. But when they're good...they're good. Each fat slice of adductor muscle packs a clean hit of sea-ness. 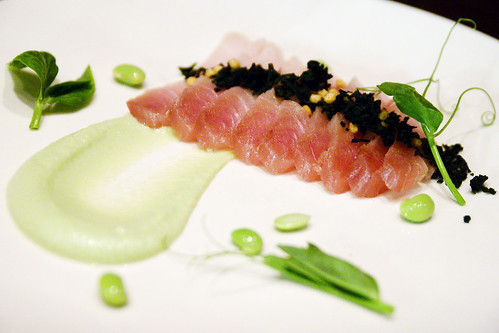 Cured hamachi with edemame, horseradish, and pea leaves: Raw fish is another one of my not-strong suits, but of course it tastes good, giving a sensation of clean sea-ness different from scallops. Each bite of raw pink flesh, so tender that it almost melts, made me feel especially carnivorous—like I picked up a wriggling fish, wriggling because like hell it wants to be eaten, and chomped into its belly, leaving behind a comically uniform set of bite marks with three indentations. Because in my mind, everything looks like a cartoon. I liked the raw pea leaves in particular, which tasted like...peas. But before I knew what they were, they were simply "leaves that taste a lot like peas." 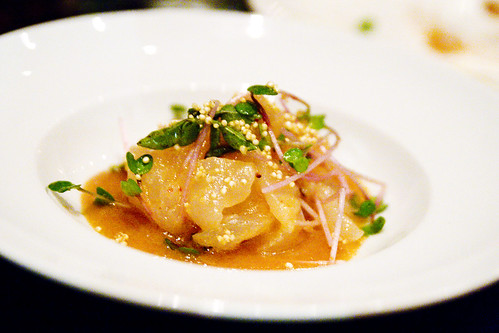 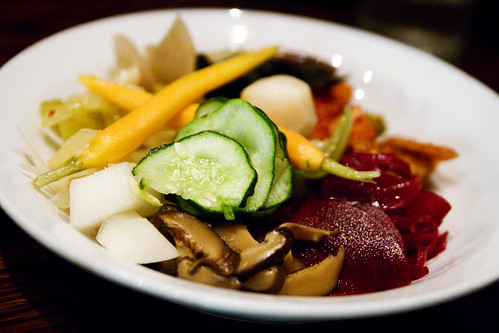 Seasonal pickles: This season's batch included kimchi, beets, Asian pear, mushrooms, cucumber, carrots, maybe ramps, and other semi-identifiable things. Ain't no better colorful and varied pickle platter than this (or if there is, you should tell me). My favorite is the Asian pear; pickled fruit has that great sweet and sour thing going for it. 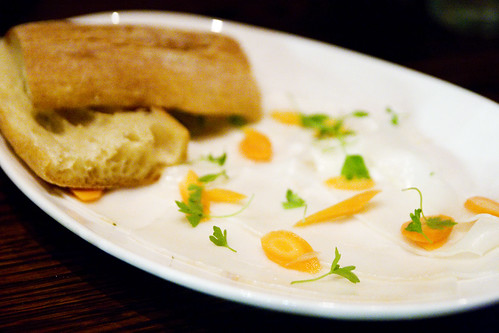 Ossabaw lardo with pickled carrots and Sullivan Street Bakery bread: Possibly the only thing at the dinner that I wouldn't want to order again. Doesn't matter that the lardo—strips of cured subcutaneous pig fat—come from feral Ossabaw piggies on an island off the coast of Georgia; it didn't quite hit the spot. While melty (no duh, it's fat), it didn't hit the mark of "I love it"-melty. Flavor wasn't quite what I was expecting either, but as I had never just eaten a plain chunk of lardo before, maybe it's just not my thing. 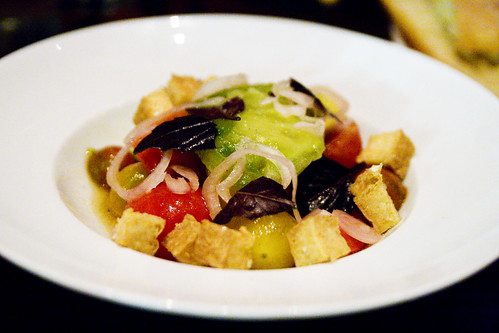 Eckerton Hill Farm's tomato salad with fried tofu and opal basil was easily the tastiest and most diverse tomato salad I've ever had. And I don't even like tomatoes. Little tomatoes, big tomatoes, green tomatoes, red tomatoes, yellow tomatoes; it had em all. I wouldn't go as far to say that I loved these tomatoes—that's insane—but that my "funky tomato flavor" alarm didn't go off while eating them is an amazing thing. And that alarm goes off almost every time I eat tomatoes. Unfortunately, this salad isn't vegetarian friendly because the tofu cubes—mighty tasty, crisp lil' soy bits—are fried in pork fat. Behold, the glorious powers of pork, transforming tofu bits into the prettiest girl in the room.

Man, I just looked at the menu and that salad was $15. When I go to Ssam Bar, I choose to ignore the prices. Yesssss. 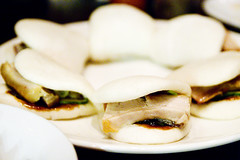 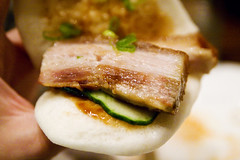 Steamed buns with pork belly, hoisin sauce, cucumber, and scallions: People flip their shit over these buns for a good reason: they are very tasty. Maybe a bit overhyped, but then so is Shake Shack's burger, and that's possibly my favorite burger in NYC. A soft, dainty bun gets a smear of hoisin, a super-thin slice of cucumber, a few chunks of fat held together by layers of juicy pork, some chopped scallions, and you've got one of the best tiny sandwiches ever. You can taste each separate component in every bite, but they come together perfectly—sweet hoisin, crisp, refreshing cucumber, and PORKPORKPORK. Unfortunately, the satisfaction is short-lived as you could polish off a bun with a few bites. 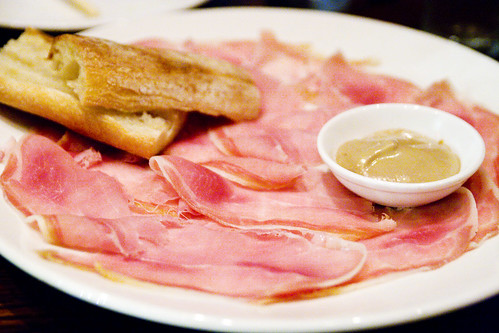 Meacham Country Ham and Benton's Smokey Mountain Country Ham with "red-eye gravy" (coffee flavored): Did you know I'm not a big fan of ham? It's probably my least favorite popular form of pig meat. Oops. Not that I hate it or anything—it's just unlikely that I will ever cry with happiness over a plate of delicious ham. These hams were definitely among the best I've ever had, all soft and blankety and delicate. The rare, ethereal species of ham to the lowly common deli meat. Not that I don't appreciate standard ham sometimes—it's good in a Cuban sandwich. 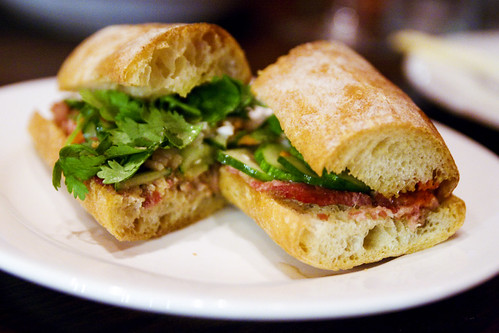 Bahn mi with ham and chicken liver terrine: Oh glorious sandwich filled with slices of finely ground fatty meatstuffs (meatcream?) that squish out as you bite through the hard crusted bread. You must eat it. 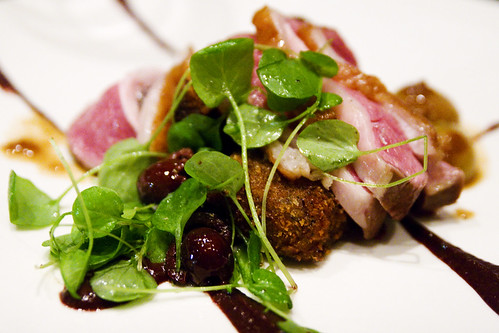 Crispy lamb belly and roasted loin with cipollinis and violet mustard: Lamb never tastes this good. Never. But I had never eaten lamb belly before, and if I have eaten roasted loin in the past, it didn't taste like this. What I mostly remember about the lamb belly was the light, crunchy crust surrounding the meat, which I'm sure was tender and fat sponge-like. Must. Eat. Again. 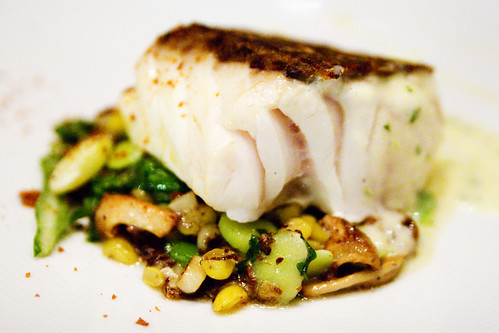 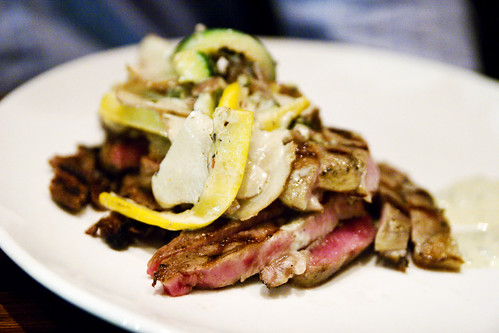 It's that pork again!

Bev Eggleston's pork shoulder steak with zucchini and buttermilk dressing: Yes, more pork, just cooked to the point of not being raw to keep most of its deliciousness intact. I don't remember this dish very well, but I know it was good. I just know. Pork is never less than awesome at Momofuku. 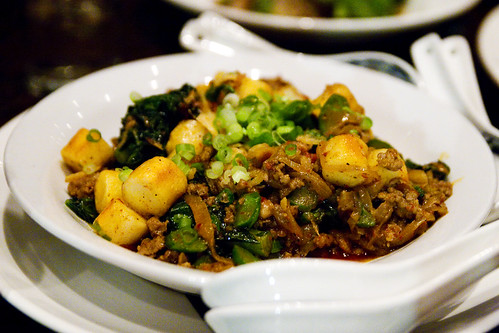 Spicy pork sausage and rice cakes with Chinese broccoli and crispy shallots: This was the spiciest dish of the night, and possibly my favorite—better yet, one that didn't give me the sensation that my insides were being coated in a layer of fat. Even better yet, one that most of the other table wasn't touching, which meant more for me. And it wasn't my favorite because of the pork so much, but because of the Korean rice cakes. Chewy, slightly crisp nubbins of dense glutinous rice goo. HOW CAN YOU RESIST? The sausage, broccoli, and shallots were cut into small pieces so that every bite could have a little bit of everything. Weeks later, I still think about the awesomeness of this dish. Sigh. 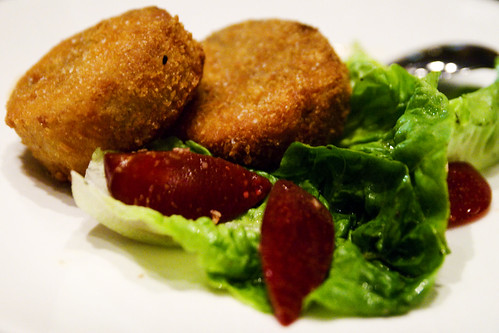 Crispy pig's head torchon with sucrine and sugar plums: Jesus christ, these were just pucks of breaded, deep-fried pig's head fat (with some meat). In other words, they were awesome. Few things are as good as the combination of crunch and salty, melty fat chunk. This did make me feel like my innards were being coated in a layer of fat. 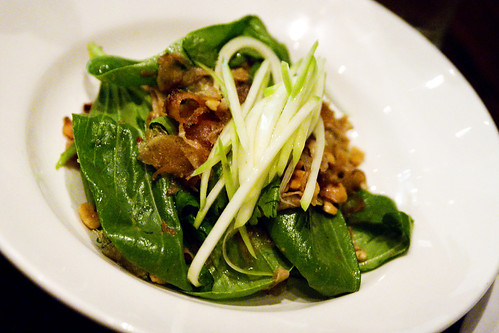 Sichuan beef tendon with green mango strips and crushed peanuts: Surely the only time I will happily eat beef tendon. I've disliked beef tendon growing up and was most annoyed when I'd find it floating among/tainting the superior beef chunks in my Taiwanese beef noodle soup. Tendon is all about the slippery, gelatinous texture, and I hand over my badge of Chinese heritage when I say that I am not a fan of this slippery, gelatinous texture thing. But this use of beef tendon was okay with me because the tendon was sliced microscopically thin, nothing like the squiggly bits I was accustomed to disliking. Funky texture was less prominent when paired with the crunchy peanuts and mango strips. I wouldn't feel compelled to order it again, but it was definitely worth trying.

And then the meat gorging was over. ...And it was time for dessert. While I wasn't a fan of Ssam Bar's desserts before (I wasn't a big fan of Ko's desserts either), the desserts this time changed my mind. But I'd still just stick with the pork and meatstuffs. 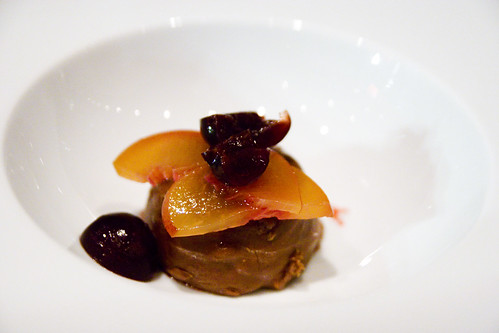 Maybe the size of a billiard ball

Chocolate hazelnut croustillant with nectarine and cherry: Holy crap, this thing looks small but it's a black hole of sweet crunchy hazelnut chocolate goodness, like a ginormous chocolate bon bon. Not something you should eat on your own. I liked the light crunchiness, but I found it a bit too sweet. 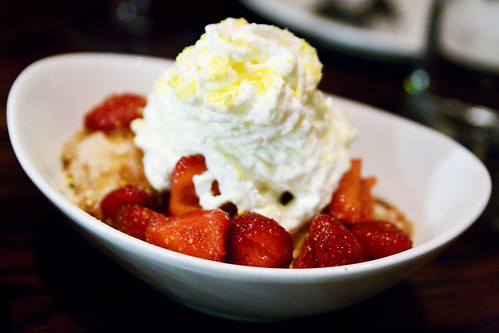 Tristar strawberry shortcake. with corn and topped with Kendall Farm's creme fraiche: Simple is best. This was the most refreshing dessert of the three, just a hunk of tender cake topped with a tower of light whipped cream. Oh, and plenty of strawberry bits. 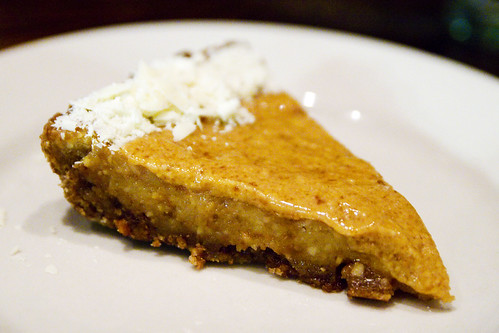 Blondie pie with cashews: Man, this pie was awesome. And I don't even like blondies. But the thick blondie filling was cashew-laden, and I do love cashews. If the filling weren't already good enough, it was enhanced by the crust, which had a crunchy hard caramel thing going for it. But like the chocolate dessert, I found this a bit too sweet

Thanks to Don, we received a complimentary alcohol pairing with every "course" (sake, red wine, white wine, and dessert wine). Don eats at Ssam Bar like its his own kitchen and knows the menu inside and out; without him, I don't think I'd have the appreciation of Ssam Bar that I have now. Hopefully I'll get to pass this appreciation to other Ssam Bar noobs. If the economy doesn't completely collapse.

On a scale of "mm" to "I have turned into a puddle of drool," this meal was "head explodee."

yay, not another vegan post! not that i don't like vegans, but i live with an ex-vegan who doesn't like pork. i eat enough vegan food, show me the pork! thanx robyn!

I've been reading your amazing blog for years, but i've never commented you before. I just wanted to say..

OMG. I had the hamachi when I tried the bo ssam in March but I have to say my favorite dish was the pork buns when I went to the noodle bar a couple days later. BUT NOW...that torchon thing...WANT.

Thank you once again for all the drool-inducing, hunger-intensifying, craving-stimulating foodporn.

Beef tendons are really good if they're cooked to the point where it's almost disintegrating...when it oozes out all that gelatin with the slightest touch.

Robyn! Thank you for letting me vicariously eat and return to NY through your blog! Your pictures are always so amazing, its like I can taste the food on my screen. I think Ed should give you a stipend to eat at more restaurants. MOARRRR! So all of us can be right there eating with you.

BTW I hope Mr Chang never reads what you wrote about his Ossabaw Lardo.