The original plan that Charlie had so ingeniously thought up was to go to Louis' Lunch, the famed birthplace of the hamburger, and order a burger while waiting for a pizza at Bar across the street. Alas, the stomachs quite reasonably did not want to yield to the combination of hamburger and mashed potato-laden pizza. Having already eaten three pizzas that day, we went just for the burger. Yes kids, that's our idea of "moderation." 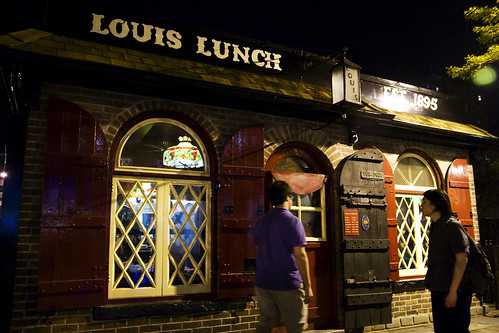 Charlie and Jason outside Louis' Lunch

The little brick hovel that is Louis' Lunch looks a bit out of place. It's moved four times around New Haven since its establishment in 1895 to avoid being demolished. It's immortal. 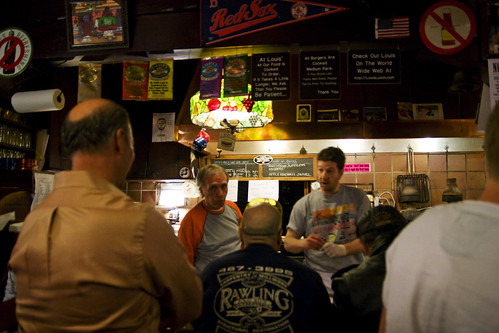 At around 10 p.m., the place was still fairly crowded with burger-hongry people. Jeff Lassen (on the right), a fourth-generation family member of the founding Lassen family, was behind the counter taking orders and grilling the burgers. Not much has changed at Louis' over the years, but there's no reason to fix what ain't broke. Burgers are grilled the same way they have been for over 100 years in vertical cast iron gas stoves, and sliced white bread (the same "bun" they've been using since the beginning) is toasted in a conveyor toaster made in 1929. Watch these contraptions in action in Roadfood's feature on Louis' Lunch. Although Louis' Lunch is associated with hamburgers, I was surprised that people rarely mention that they have a dessert menu. And not just any desserts, but pies. Pies! Pies filled with creamy goodness and/or fruit! Why would anyone leave out the exciting prospect of pies?! I DON'T KNOW! 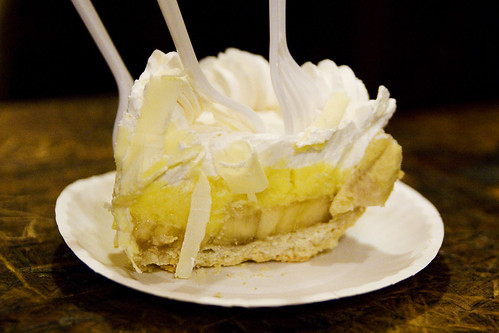 Thankfully, Jason had pie on the mind and we shared a towering wedge of banana cream pie, aka one of the best pies flavors ever. The cookie-like crust was a bit too tough to yield to the not-so-powerful crush of the plastic forks, but the filling of sliced bananas, vanilla pudding, and fluffy whipped cream was easily scoopable. Each filling component was in about a 1:1:1 ratio...or maybe 1:1:1.5. There was a lot of whipped cream. But I love whipped cream, so I didn't complain. We sat at the large corner table, which looked like the newest part of the restaurant. Other booths were built for two, but probably two people from the early 1900s. That is, people skinnier than I am. 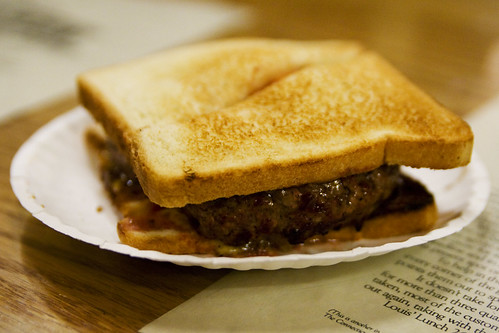 And then we had burger action. Drippy burger action. With cheese, grilled onions, and a tomato slice. Snuggled between two squashed slices of lightly toasted bread. Keeping with 19th-century tradition, they don't do ketchup at Louis' Lunch. Don't ask for it or else you'll look like a schmuck. You should be happy enough with the cheese, tomato, and onion anyway. The fat and juicy patty was cooked medium-rare, my favorite form of done-ness. I can't say I loved the burger, but I liked it. Maybe I would've loved it if it had more charring action. The patty tasted rather solid and dense, packing a lot of meat-ness in every bite. For $5, it makes a satisfying meal, although it's even better rounded out with a slice of pie. ;)

And thus the day of New Haven fooding that I managed to spread over about one and a half weeks of blog entries had ended. Pizza, ice cream, pizza, pizza, and burgers, consumed with the help of three friends. Not a bad itinerary...not bad at all.

I've seen this place on a television show!! I love eating my burgers with toast instead of buns at home, I MUST try this someday. Hmm, too bad the vertical stoves leave something to be desired in terms of charred-ness.

Sounds like a fun culinary tour. I always enjoy the history behind the food, too.

You should have gotten an egg creme!

I love the pie picture with the forks stuck in it. The filling looks really great! Different than what I remember banana creme pie filling being, but... It's been a while, so I may have no clue what I'm talking about!

Sheela: I've never even thought of eating burgers on toast before. It works! TOAST IS AWESOME.

Tracy: I loves me some 100+ year old burger! I didn't mention all the history in my post though. Didn't take a photo of the bricks that had been donated by people all over the world to rebuild the restaurant...those were neat!

Christina: I think banana cream pie can be whatever you want as long as it has banana and cream in some form. ;D

I've only had an egg creme once in my life! And while I liked it, I didn't like it so much that I felt like getting it again. But I probably should've tried it. Next chance I get!

Um. Banana cream pie.
I've been ACTUALY craving for pies for days and this picture did a good job torturing me!!!
Who could say no to the golden combination of cookie curst, bananas, vanilla pudding and a mount of whipped cream!!? I'm glad you enjoyed the pie:) Oh also, for the burgers, it's interesting they make them with toasts rather than burger buns. I guess that way you can better enjoy the meatiness? lol

Awesome itinerary! Are you kidding? I build just about all my travel/vacation plans around food. I'm a sucker for pies, too ... pizza pies, froot pies, burger pies ... oh, wait, you haven't posted about that. YET!

I dunno -- as delicious as that burger looks, I just cannot wrap my mind around toast taking the place of a bun in such a situation.. it's just not right!
- S

I would loves me some Mixed Froot Supreem Pie! It soundz awesum! And then roll 3 to get some more. Can´t make out what you get for rolling 5 though.

And burgers on toast are heaven. Heaven, I tell you!

Ooh, banana cream pie! Hopefully I can try to make one of these days... I think those hamburgers are more like sandwiches, because they don't have regural hamburger buns. Hmm, now I want to try a veggie burger recipe. :D

Bangsil: YAY TORTURE BY PIE!! I do what I can.

Steph: Toast is awesome! If you ate it, you'd be ok with it! I think. Cos it's full of meat.

Mikey: I wish I could've tried mixed froot supreem as well. But the stomach can only hold so much. ...So much...

Heidi: It's a sandwich burger hybrid! It's the FUTURE! MAYBE!

Banana cream pies are pretty easy to make! Doooo it.

I bet you would have loved it with ketchup! ; ) Everything else is great, and I love the toast, but after my first visit to Louis', I started getting it to go and adding my own. It is the missing delicious - I gotta have that glutamate!

i want that toaster! it's so fancy! of course, i would also need a lot more counter space.

wah! i saw this place on heston blumenthal's tv show on youtube. have you ever seen? he quests for the perfect burger and is crazy and makes his own cheese slices and he makes a funny funny face after biting into a mcd burger.
PS I'VE NEVER HAD BANANA CREAM PIE. this must be quickly remedied.

Also, by the time we would have gone to BAR it would have been filled to the gills with obnoxiousness, as it turns into a BAR/Night Club at a certain point in the evening. BAR is best visited before 9 PM.

After four years and a lot of burgers in the food heaven that is New Haven, I have to say you have chosen to visit the one that is really known only for its kitsch (and the fact that you basically have to be in the mob to know when it'll be open).

Sadly, the ancient Yankee Doodle closed several months back - that was the one and only New Haven burger bar, sans tables and replete with tomato chutney and fried do-nuts for desert.

I am surprised, though, that you didn't visit Gastronomique, for the inch-and-a-half thick burgers on a hard french roll served to you by the creepiest dude in Connecticut.

Erica: I do love them gloots.

Molly: I'd like the toaster too, but I'd need more bread to toast. ;_;

Janet: Um...we need to get you some pie.

Dee: I already ate it!

great post. when we went to louis lunch we forgot our camera so i took a few on my camera phone, but it just didn't cut it. it also was hilarious walking in and having to watch how the locals ordered. i'm from philly and I felt very similar to the tourists at pats or genos when they attempt to order a cheesesteak. people freeze... they have no friggin clue what to do... they are like a deer caught in headlights. and then, the counterperson says, NEXT! and you're up - showtime! get your balls up and order! i'll tell you, I love the old-school way of cooking the burgers. i hope this place never succumbs to eminent domain.

We Are Never Full: I'd be so screwed trying to order a cheesesteak in Philly.. ;_;