It's quite easy to hit New Haven's most famous pizzerias, Sally's and Frank Pepe, in one day—they're only about a block away from each other. All you have to do is waddle out of one and into the next. As we waited in line at Pepe's, I wondered if anyone walking by would recognize us from Sally's and then deem us crazy. Or awesome. Thankfully, Pepe's line moved more briskly than Sally's. It benefited from having an employee whose main purpose was to keep track of how many people were in each party and seat them. It was organized. My mind, it was blown. 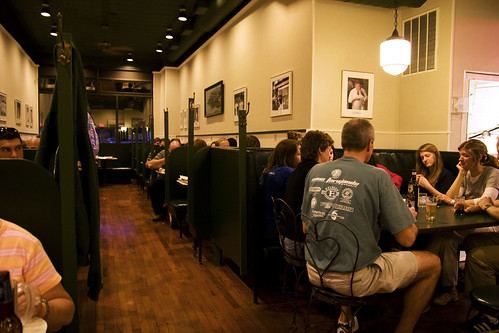 The bright cleanliness of Pepe's spacious interior was world's away from that of Sally's. Not that that made it any better or worse—it was just another thing to blow my mind. Sally's had a unique personality/quirkiness going for it, while Pepe's more refined look seemed like it would score better with the health department. Not to say that Pepe's didn't have it's own personality; I would describe it as "friendly" and "hospitable." You can't order birch beer by the glass, but by the liter? Yeah! I'm not sure I've ever had birch beer before, at least not in clear form, and I had never come across Foxon Park sodas. As the wikipedia entry says, birch beer kind of tastes like a mintier (or perhaps "cooler") version of root beer. It's tasty stuff. But what shot this soda into the territory of "Man, That's Awesome," was the design on the label and the way the frothing soda seemed to be leaping out of its golden mug like a sentient mass of white goo. Nubs, the soda has. 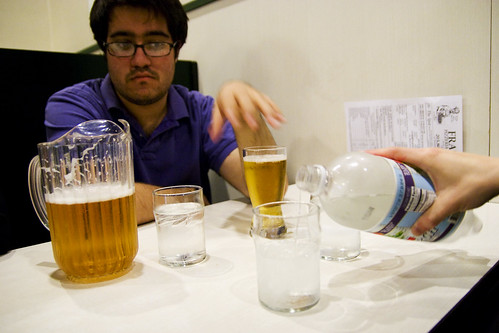 You can also get a pitcher of normal beer, aka fermented starch squeezies. Charlie and Lydia quenched their thirsts with the bitter while Jason and I stuck with the sweet. Charlie chose our small bacon and clam pizza. Yes, that's two kinds of salty goodness right there; it's from the sea and the land! I had my mind set on Pepe's famous freshly shucked clam pizzas, but I would've never thought of adding bacon into the mix. What a fool I was. Each bite of tender, briny clam plop, crisp, smoky bacon chunklet, gooey cheese, and crunchy crust (no tomato sauce) provided a delicious variety of textures and sodium-based flavors. And you know how sodium makes everything taste good. You may be aware that I'm not a big fan of bacon on its own (yeah, I'm crazy; hell, some vegetarians probably like bacon more than I do), but combined with other foodstuffs, I'm more likely to give it a warm welcome. Clams and bacon: it works beautifully...on pizza, at least. I'm not sure I'd want to eat a sandwich stuffed with clams and bacon, although if you made me one, I wouldn't turn it away. 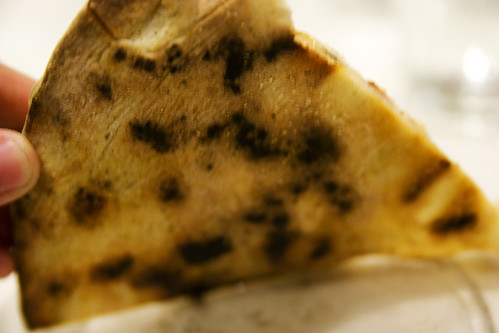 After just eating Sally's tender, puffy crust, I found Pepe's a little too hard-crunchy for my liking. Still much better than most crusts, but below Sally's on my scale of New Haven Pizza Crust Deliciousness. The clams and bacon, however, were among the best ingredients to ever sit atop a pizza. The pizza left behind a nice ghostly slick of clam juice and fat on the parchment paper, its last impression upon this Earth. That is, aside from leaving contented smiles on four very full 20-somethings.

Between Sally's and Pepe's, I preferred Sally's for its crust and Pepe's for its toppings. And while I may find the crust the more important deciding factor of a pizza's deliciousness than the toppings, I don't feel like I should have to pick just one of the restaurants to eat at when I've proven that you can easily go to both in one night (although this is easier if you have a group of four). Screw decisions; make life easier for yourself by eating at both pizzerias. Heh.

In part four, I shall consume things of burger and pie nature. Until then, I will go to sleep; the muscles of all my appendages are sore from moving in. That's what I get for being in grossly inadequate physical shape.

Now I want pizza. I resisted the other places, but bacon and clam does sound good.

Hooray on your new digs!

Bacon AND clams? This pizzeria read my mind.

omg pizza ghosts. i need more of those in my life.

Birch Beer FTW! It's fantastic. I have some fancy cream soda back at the house but now you're making me crave a birth beer. And I hardly ever drink soda. Maybe because all the "mainstream" stuff is craptacular and over-HFCS-ed.

Birch flavoured soda.. whoa! o_O
It's one of my favourite scents in the sauna
but this is a whole new level ;)

Pizzas look awesome. Wish I could get some
decent pizzas like those over here.
Especially upskirt looks delicious!

You seem to be on a real pizza vibe lately.

ok i think we must HAVE to make sure to make it at least to Pepe's in CT now -- i can almost taste the clams and bacon!!! And i've been missing birch things since russia -- we have birch juice their in the spring (very barbaric i know, to drain birches, but ::sigh:: sometimes its just to yummy!)

I hope the move wasn't too stressful and that you're enjoying the new apartment!

Freaky. I've had Foxon Park in my head all day because I've been meaning to order some of their wares and I couldn't remember the name of the company. Thanks for subliminally reminding me, Robyn!

It's funny; while Foxon's Birch Beer might be minty, Philadelphia-style (i.e. Pennsylvania Dutch) Birch Beer always tasted like a cross between Root Beer and Cherry soda to me. Maybe it's because it's usually a rusty red color.

Julie: BACON AND CLAM MAKES YOU DO THINGS YOU NEVER IMAGINED!#!@#

My muscles ended up being even more sore on the second day. FAIL.

Vanessa: A pizzeria that read my mind would use lots of ricotta. And from now on...there must also be bacon and clams.

Carl: I only drink soda during special occasions. O r when it's free. Sometimes these two things collide! Consuming too much HFCS makes me feel bad. ..Not physically, just mentally. Cos it's all COOORN.

Gijsyo: One cannot visit New Haven without being in a pizza vibe! :D

Olia: You have to go to Sally's AND Pepe's, hehe.

Birch juice?! I wanna try that! DRAIN THOSE BIRCHES!!

Ms. Blake: It was only somewhat stressful. Am enjoying the new apartment at least. Will be better when I ORDER MY REAL BED and stop using my inflatable mattress.. :P

Will Helm: That's what I'm her for...to give subliminal reminders!

Haven't had a root beer cherry soda cross yet. :O I don't know the last time I had cherry soda. But um...speaking of soda, I did have a can of Coke the other day though (for the first time in years, probably). It made my body jittery. :(

OMG that sounds so yummy~!!!

So how's your move to brooklyn? -=D

wonders: The move went well! I'm settled in quite nicely now except that we haven't ordered internet yet (I'm stealing someone's wireless..eh) and I haven't gotten a real bed yet. Soon..hopefully...

That's great, maybe I'll see you one day on the J train! -=D

No real bed? That sucks....we sleep on a mattress on the floor, that's our real bed lols (kinda sucks when your old -=X) Stealing internet is cool....one of my gf does that lols

Yay! Glad to see you survived your move. Not looking forward to mine in August. I can sympathize with the no internet though -- that's never fun. And yet you still manage to blog! I'm impressed =).

I'm so torn -- your reviews of all these pizza places make New Haven pizza sound incredible, but after three years of arguing with my best friend about whether New York or CT pizza is better, I just can't bring myself to admit that I might be wrong. LOOK WHAT YOU'RE DOING TO ME.

Also, that Mario cake on Serious Eats is amazing.

wonders: I WAS ON THE J TRAIN TODAY, YEAH!! But I take the L to go to work, heh.

I'm getting a real mattress tomorrow! I'm so excited! Yeah!

I don't know if I could pick which one is better, but I would LOVE to have a New Haven pizza place nearby. :\ Then again, I'm surrounded by good NY pizza, eh? And probably a lot of bad, but there's enough good to go around.

Thanks for reading SE! :D

I don't think I've ever been to a pizza place where they served the pizza on parchment paper before.

Clams! Bacon! Pizza! The soda sounds interesting. I like how it's clear, too. Almost feels as if I'm drinking water, but fizzy and sweet!

I have got to make a trip to New Haven! I'm serious, I would make a trip just for that pizza alone. It looks awesome!

Christina: I hadn't seen the parchment paper method either until I went to New Haven!

Yeah, I dunno why clear soda is like...OOoohhH. Or if I see clear soda I expect it to taste like Sprite.

Madeline: If you're not too far away, I'd recommend making a pizza trip! :D

Oh, how I envy you! I haven't though of Birch Beer in such a long time and Pepe's ... OMG! Their pizza is what I dream about on a daily basis in Wyoming where pizza comes frozen or is Domino's or Pizza Hut. I am going home to CT in July and Pepe's has been on the list for 6 months now, so I can introduce my husband to what pizza is supposed to taste like!

Hi, wow I really enjoy reading your blog. I found your site through google after eating at Otto last night, but all of your reviews are awesome. I have a blog of my own, I would really enjoy if you stopped by sometime: www.blindblogny.blogspot.com Thanks Dan