I'm so behind on blogging that I can do round-up posts by food group. And by "food group" I mean "pizza." (It's a group—just like how gelato, hamburgers, and noodles are groups.)

All of these pizza outings have one thing in common: Kathy. She's a pizza addict. Although I've known her for years, it was only a few months ago that I found out that she likes to eat pizza a few times a week. I eat pizza a few times a month, maybe. It's a wonder she doesn't write for Slice, but she says she's not discerning enough. All slabs of bread covered in cheese and tomato sauce, beware—Kathy will suck the life out of you, and then digest you in a most painful bath of stomach acids.

So here's some pizza. I was just going to say that I don't know how old L'asso is, but then came across their conveniently timed post announcing that they had their 5th birthday on July 15. Which confused the crap out of me because I'm almost positive that I remember the Chinese restaurant that used to be where L'asso is now, yet I've only been living in New York City for...not five years.

You know what this means: My brain is making stuff up. I'm pretty sure that's a sign that something is wrong. Like brain disintegration.

OHHH WHATEVER, I won't worry about it. ...what's this goo coming out of my ears... Kathy, Jessica, and I shared two pizzas and a salad. First off: pizza margherita D.O.C., my favorite kind of pizza. Tomato sauce, soft plops of buffalo mozzarella (in my opinion, it's worth paying extra for the buffalo origins), fresh basil, and extra virgin olive oil, with a sprinkling of oregano on a thin, slightly chewy, non-soggy crust. I don't think anything stood out about this pizza—it was just...simple and good. A++, WOULD EAT AGAIN. 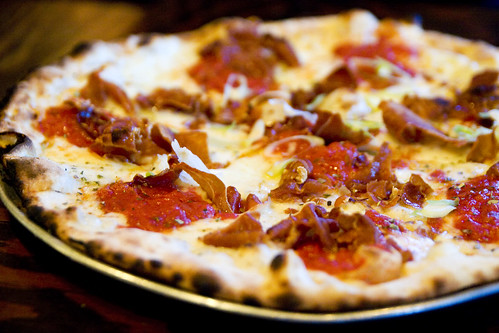 I couldn't find the name of this pizza online, but it's the one with green onions and Italian ham. Alas, I wasn't as fond of this as the margherita—the ham was too crispy for my liking (imagine a potato chip...made of pork) and all I could taste was salty pork without much green onion to go with it. Crust was good though. The Insalata L'asso came with mixed greens, asparagus, fennel, hearts of palm, goat cheese, and pistachios. Fresh, crisp ingredients and all around pretty awesome (besides that I think it would all go nicely on a pizza). Now I know where to go if I want a massive entree-like salad the size of my head. Jessica was thoughtful enough to bring a vanilla frosted chocolate cake for Kathy's birthday. (I didn't bring any sweets; I just brought...my looove?) The waitress whisked it away and returned with three plates holding massive cake wedges. She was a notably nice waitress; I hope she enjoyed the final uneaten slice of cake that we offered to her.

A pizzeria around Little Italy and Chinatown with nice service and lack of toursts = hooray! I'd go back.

Update: Adam just posted his Veloce review on Slice! It's WAY better than whatever I wrote here, so you should read it. If you're interested. Kathy and I visited Veloce Pizzeria right before it got mad props from Frank Bruni—probably a good thing so I didn't have any preconceptions of what I was going to eat. For instance, I had no idea that they specialized in pan pizzas, or grandma-style. Upon my request, we went with the arugula pizza topped with a hefty layer of mozzarella, fontina, sweet onion, and bisected grape tomatoes. "On top of pizza" is my favorite way to eat arugula, which I find too bitter on its own. Our crust (thicker than a regular slice of pizza, but much thinner than Sicilian; alas, I didn't have my calipers on me), while mostly firm with a bit of chew, was floppier in the center—seemingly less magical than Bruni's. But as Bruni said, the outer part was pleasantly extra crisp and infused with cheesiness. He also pointed out that he didn't like the arugula pie, so maybe I just FAILED. Then again, he said it was beacuse the sweet onion made the pie too sweet, which I didn't sense at all.

Overall, I liked the pizza, just not in an "oh my god ohgod this is frakin fantastic" way. I probably need to check it out again to get that 100% firm crust action. The desserts were also in the "good, not awesome" camp. Sliced gelato, in this case lemon and strawberry, was...self explanatory. Slices of gelato. Tastes like what it says. Nothing less, or more. Pistachio panna cotta would have been better if it had been called pistachio mousse, since that's what it tasted like to us. The texture was super light and a bit fluffy, which was nothing like the creamy, wobbly gelatinous panna cotta I was used to. Not to say this wasn't panna cotta or that it tasted objectionable; it just wasn't what I had in mind. Perhaps I'm being too traditionalist—I love panna cotta for its "jiggly, creamy, vanilla-tinged powers."

Veloce. We will meet again. 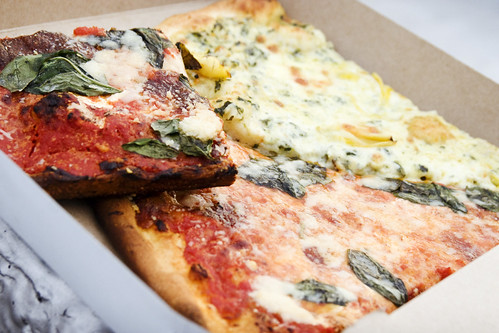 I already mentioned the awesomeness of Artichoke's Sicilian pizza, but I only tried their signature spinach and artichoke pizza last week. 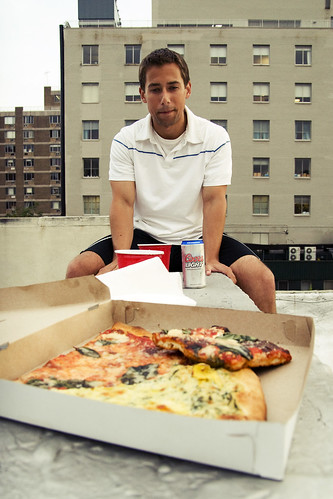 This is a hungry Doug.

The spinach-n-choke pizza is known for either being delicious in a bad way, or disgusting in a bad way. Ed Levine hates it, as far as I know. Adam seems to think its okay. And I...actually really liked it. Of course, it doesn't taste like any regular pizza—it tastes like rich, cheesy creamy goo. Loads of it. Suffocating a layer of bread and whatever bits of spinach and artichoke are buried in it. The first dish that came to mind while eating this was the pasta alfredo I used to get at Outback Steakhouse while growing up (I didn't like steak). I remember slurping the linguine, causing thick gobs of alfredo sauce to collect on any surface it touched (i.e., my mouth), and then how, the next day, the leftovers would congeal into a tangled block of linguine-bound-by-milkfats. Fuckin' A! Kathy, Doug, and I also shared slices of plain and Sicilian while eating on Doug's rooftop, but at that point in time, it was the spinach and artichoke that stole my heart. And possibly taxed it.

...my tummy rumbles for moar, eheheh

Whenever I see pizza in your blog (or SE/Slice) I get sad...because there's a dearth of good pizza on this piece or rock I call home.

I wish I lived on your rock...or somewhere really near it...so I can have a taste of awesomeness...

"stole my heart. And possibly taxed it." Bwahahaha! The calipers comment also had me guffawing. I'm being too food-biology geeky.

The margherita does look very classic. Is arugula a bit like rocket? Not necessarily in taste, but... properties? I can't eat rocket on its own, but I love crayfish and they are always found together, so I learnt to be fine with it. Eating rocket always makes me think it should be classified as a herb or something.

I didn't see the salad selection on the menu on their website.

I always love to go with the basic for almost anything. (DOC pizza). Simplicity is best I've learned.

as for Lasso's space and that chinese restaurant... you might be thinking about Funky Broome... which was on a corner one block away... it's now a clothing store i think...

dude i have to try velocce. yummy

Ed: :[ (pat pat) You've got some good stuff thar in the Philippines from what I've heard!

SuperChomp: I really wanted to say CALIPERS! Such a fun word. I'm glad you approve!

As far as I know, arugula and rocket are the same thing. :D The first time I heard the name "rocket" though I was mightily confused.

I didn't know how awesome simple pizzas were until I started living in NYC. I think before that I was used to eating Pizza Hut and the like..haha. ;_;

Danny: Was it...green? Maybe that was it! But I still recall hearing about the opening of L'asso so I'm still confused. Or maybe I made that up. VERY POSSIBLE (brain chunks fall out of head).

Marcia: Let me know what you think of it!

L'Asso's!!! Next to Luzzo's, it's my favorite pizza place in the city :) The DOC is to die for, mmm. If you go again, check out the Funghi -- the truffle oil on top is AMAZING.
I really need to check out Veloce :D

Ahh, I meant Tartufo! As always, I was thinking about Luzzo's menu :P

Thanks for the words on Artichoke slice! Its next to the ymca and its always a "to consume" or "not to consume" battle after a class.

thanks. I was looking at the lunch menu. :)

I love salad, but it has to be substantial (and creative) enough to be a good one though. Sometimes I can't stand restaurants that charge $8 for just a small pile of field greens. You know I can get 8 pounds of greens from Chinatown for that price? ")

I don't know if you've seen this http://www.youtube.com/watch?v=MNqZzeREDaE it's a shame it only has three thousand or so views. But they loved L'asso.

weird im making pizza right now! hope its as good as these look. I tried the Sicilian at Artichoke - was very good but I really didnt like the sound or look of the artichoke, but then I dont like artichoke!

Yay you went to L'asso! I LOVE L'ASSO. I'm so glad you went. I would go there at lunch to get $2 slices of margherita. There pastas are pretty good and I definitely recommend the tartufuto (probably spelled that wrong), which is their mushroom-y pizza.

It is also the only decent place to eat at that's near Bowery Ballroom.

I made pizza today. It was Gorgonzola-fig and rather tasty. Crispy crust power here I come! We should make pizza together some time.

Erika: I shall get the shrooms next time!

kim: I agree; I rarely order salads in restaurants cos it doesn't seem worth the price. But I kinda suck at making salads so if I can find a good one, I'm happy. :)

M. A. Salha: Nope, haven't seen it before; thanks! I just fast forwarded to the L'asso part (4:35 if anyone else wants to check it out).

Edd: The artichoke slice is definitely not a looker like the sicilian. But still delicious!...maybe.

Amy: Second rec for shroom pizza! I'll have to get it next time.

I have to try that arugula pizza. Somehow my taste buds gravitate toward things piled up with veggies and tomatoes on bread.

D: Same here, re: gravitation. It's like salad!..with cheese and bread underneath. Um. Yes.

why, fuck you. now i have to go make some shitty bruschetta to make up for my pizza cravings.
that arugula pie looks delish. i usually make pizza with prosciutto crudo, tomato and buffalo mozarella, and topped with a shizzload of arugula.