The week after I got back from that trip I took to Seoul, you know, way back when (i.e., May), all I wanted was Korean food. You think I would've been sick of it. But. No. I may have been tired of kimchi by the time I left Seoul, but when I got back to New York City I longed for patbingsu and sujebi and rice cakes and fun little dishes of pickled fermented things. Which is how I ended up going to Koreatown three times in one week.

First stop was Arirang, a new-ish (an age that can be counted in months) restaurant that specializes in sujebi (torn noodles) and kalguksu (knife-cut noodles). While boohoo-ing to Emily about how awesome Seoul was and how much it sucked to not be there anymore, she suggested we try Arirang. My heart let out a little squeal of excitement (imagine the sound of air being slowly let out of a balloon; it's a bit more pathetic than that); THE KOREAN MAGIC BEGAT BY NOODLES COULD CONTINUE.

I've actually been to Arirang twice since mid-May, which is rare for a place that isn't within walking distance of my office. You should go there too. Here's how to do it. 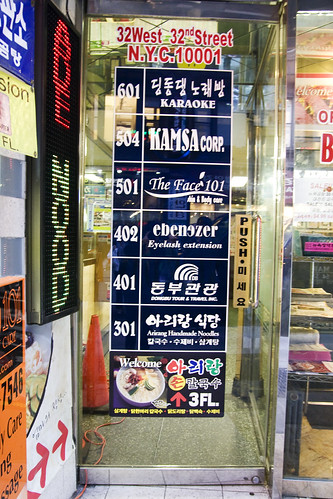 Do not go to the EYELASH EXTENSION floor.

First, find it. It's on the third floor of 32 West 32nd Street and easy to miss unless you know to look for this door. Or maybe you're already familiar with this door because you extend your eyelashes. I won't judge. (...Maybe I will.) 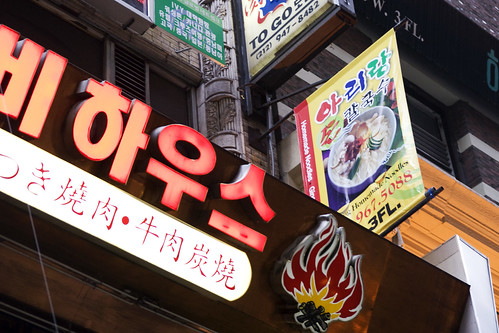 You might also spot the sign above the awning for NY Kom Tang Soot Bul Kal Bi. But probably not. Second (or pre-first), have at least two people with you. Or four. One bowl of noodles can feed at least two people, and bathe a very small kitten. When I ate in a group of five (Emily, Mandy, Caroline, and Lee Anne), we were stuffed just by splitting two bowls of noodles and one seafood pancake. Later when I ate in a group of three (Jessica and Kathy), we shared a bowl of noodles and a seafood pancake with lots of pancake to spare. And you know how my friends and I roll; we're Asian women who can pack it in. Pancake, get in my mouth.

Third, order food. Specifically, start with the seafood pancake (pajun), one of the best versions of this dish I've ever had (the other being from Organic Tofu House). It's a hearty round of crispy and chewy goodness full of chopped green onions and seafood bits, mostly cuttlefish, methinks. 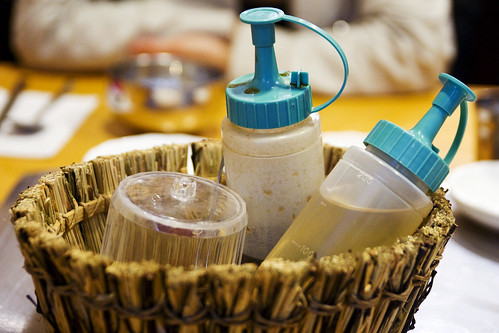 Dip it in a mix of vinegar and soy sauce, found in your personal woven Condiments Basket, for extra deliciousness. 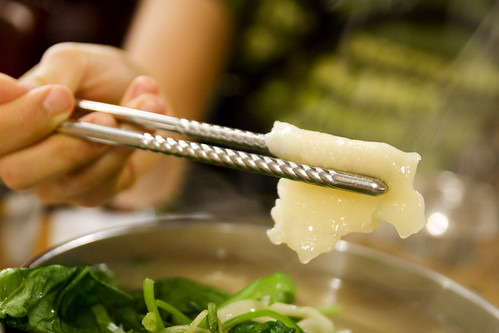 AND GET NOODLES. We went with kaljebe, or a kalguksu/sujebi mix. I prefer sujebi—I love the pockets of chewiness in the fat dough chunks—but the kalguksu is good too.

Soups, in order of increasing deliciousness: 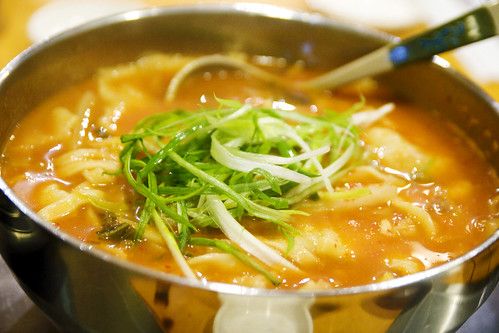 Kimchi: It's not bad. But not as good as the other two soups I tried. So...that's...not a ringing endorsement. Seafood: I likey. Underneath that pile of raw spinach was a mass of noodles swimming in a briney soup with cuttlefish, clam, shrimp, and other various bits of sea life. 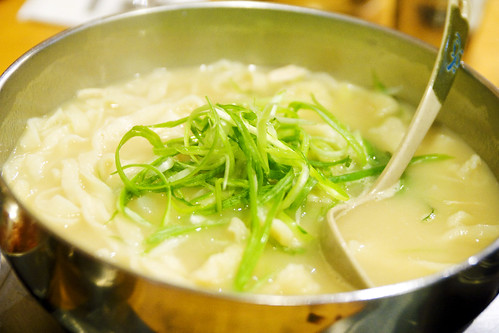 Chicken: This rich broth made me question what the hell kind of chicken I've been eating my whole life. It's. So. Very. Chickeny. At least, what I think chicken is supposed to taste like considering that most of the chicken I eat doesn't really taste like anything. Or it tastes like everything. IT SIMULTANEOUSLY TASTES LIKE NOTHING AND EVERYTHING.

But this soup of distilled chicken squeezin's is nothing like that. Just try it and tell me if it makes little fireworks go off in your brain (the parts that sense "chickenness"); I can't be the only one. The prospect of getting this dish again, along with the seafood pancake, is what pulls me back to Arirang. I think about it with longing, like a past love, but instead of sickening depression, the memories fill me with warm happiness! Yay!!!@#!@#eeuh [sobs in a corner]. That patbingsu is thinking, "Fuuuckmeeeeee I'm dead," in patbingsu language.

After Arirang you can go to Koryodang for dessert, specifically patbingsu, the Korean version of "shaved ice with loads of toppings and fruit and ice cream and stuff, because if it were just a bowl of ice, that would suck." It's the only patbingsu I've had in New York City, which by default makes it the best. Overall though, I'd call it one of the best shaved ice desserts I've ever had (keep in mind that I've never had shave ice in Hawaii). Unlike the others, Koryodang's is so finely shaved that it melts evenly and smoothly, as opposed to being unappealingly crunchy clumps. The toppings are quite generous, my favorites being the soft lil' mochi nubs and the sweet red beans. The only downside is that one bowl is something like $8, which is a lot compared to...well, Asia, and other similar desserts in the city. But at least you can feed two people with one bowl. 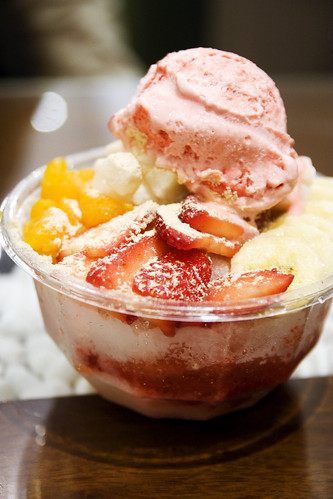 Out of the two bowls we tried—red bean and fruit—red bean was the winner. The might-be-cherry-flavored syrup in the fruit bowl made everything too sweet.

Sometimes there is just no better description than it tastes chickeny....it just makes so much sense.
Yay I never knew a Koryodang existed...shaved ice is so good! Definitely hitting that up soon.
Haha the soup is so large you can "bathe a very small kitten".....hmm I wonder

DELICIOUS! The seafood pancake looks especially good! The photographs are beautiful, as always. Thanks for the laughs :)

as usual...thanks for the drool-inducing photos!

i wonder if you've ever had halo-halo?

The chicken tastes so 'chickeny' it's probably people they just killed it in the back. Fresh poultry. :)

Oh man. Yummy memories. I'm not even a big sujebi or kalguksu fan and this place is AWESOME. Plus I can't rave about their pajeon enough!

So apparently there's also patbingsu at the other cafe on 32nd St., I think it's called Cafe Muse (the one next to Gahm Mi Ok). Have you tried it there yet? One of my friends told me she likes their's better than Koryodang's...

I wish Red Mango in the States would offer their patbingsu like they do in Korea. Skip the ice cream, patbingsu tasted AMAZING when I had it with the Red Mango fro-yo in Korea -- a more summery, "fresher" taste combo!

GG: You seem to share the same taste buds as Kathy so..you gotta try the shaved ice! :D Or we could all go out for a shaved ice excursion? Hehe.

Ed: HELL YEAH, halo halo is awesome! Unfortunately I haven't gotten to eat it that often, which also goes with the sadness of...not having eaten Filipino food very often. Wah.

What is it with Red Mango not having patbingsu here? I'd go there if they did!

Sorry. I typed this really early in the morning. I meant to say "it's probably BECAUSE they just killed the chicken in the back store". My bad :P

I've never seen a shaved ice bowl like that in my life, but it makes all the shaved ice I've eaten to be worthless.

i should try that patbingsu place. My friends and I went to another one in ktown (i can't remember the name) but they served it in these humongous martini glasses. It's rather expensive, $12, and the taste is.. alright. I think it's a few stores down from koryodang actually haha

Those noodles look really good. I need to go try that. Those places in K-town that's upstairs kind of scare me and I would only go after seeing someone else going in and coming back alive. haha

Christina: GO GET SOME PATBINGSUUUU!

Danny: Do not be afraid! I think I need to go to non-first-floor restaurants more often. We could do a series of NON-FIRST FLOOR K-TOWN RESTAURANTS.

Those foods look really fun. Like a Japanese nabe or a Chinese steam boat. I enjoy such "community eating" things. The chicken one sounds so good, maybe some kind of boiled down stock? Well, I love chicken stock. I think that'd go down a treat.

If you like patbingsu, you should go to the FLushing mall. There's a stall that sells Taiwanese ice with lots of toppings to choose from and it's quite inexpensive (under $5)

Omg yum i never tired Korean and i have always wanted too, i will be sure to visit this place when i got NY. omg thanks. :DDD

My husband is from the UK and is of the opinion that commercially raised chickens in the U.S. taste bland. He prefers the free-range/organic options which, according to him, taste more "chickeny". Maybe the restaurant buys free range? I have major noodle envy, by the way.

SuperChomp: I'll all about the community eats. Or just sharing stuff, in particular, splitting sandwiches so I can get two kinds in one meal.

Kim: I've had it! :) Definitely more bang for your buck than at Koryodang, although I like Koryodang's ice more.

Marcia: OH SWEET JESUS yes, do get some Korean food. Soogooood. I'll have more recs in my next post.

I took two friends to Arirang because of your post--in fact I was reading it out loud on my Iphone when we got there so we would know exactly what to get. It was my first time to a Korean restaurant and to Koreatown so it was quite an experience. We ordered the seafood pancake and the chicken sujebi----YUMMMMMMMMMMMMMM! That pancake was brilliant and the soup was like the essence of chicken.
Thanks for introducing me to Korean food!!!

Amy: YAAAY I'm so glad my post pushed you to try Arirang...and that you liked it! :)

Thank you thank you for this post. I will read all Koreatown posts that you write for sure. We go to a few places in Koreatown and love what we have, but would love to branch out. I totally want to try knife-cut noodles and torn noodles. Yes! Thanks so much. I love Koryodang too.

Elaine: I'm glad I could help!