And when I say "ass," I mean "stomach." But the figurative kicking, not something that would result in internal bleeding.

Otto is my favorite Italian restaurant, which isn't saying much considering that I don't really eat Italian food anywhere else. (That has to do with price; it tends to be expensive.) My strategy for eating a meal at Otto is usually to get a pasta dish followed by a cup of gelato (three flavors, of course). I always eat everything without much trouble, sometimes with even more food than that, as their vegetable and seafood dishes are some of the best things they serve.

But when I ate at Otto with Cheryl a few weeks ago, something happened. Something...destroyed us. We both ate the same amount of food—a pasta dish and gelato—and both went into disorienting food comas unheard of in all my Otto experiences. It's not like we felt sick. Just very, very sleepy. And maybe a little woozy, but we may have been embellishing it by that point. I can't remember because I was woozy. 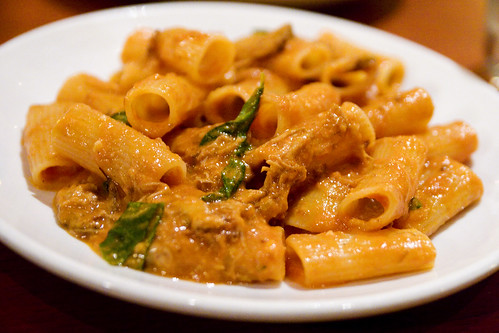 I went with rigatoni con stracotto, heritage pork shoulder in a tomato basil sauce, upon Kathy's suggestion. Little chunks of tender pork, a few basil leaves, and a light coating of rich, creamy tomato sauce—everything tasted balanced, but it didn't blow me away. The pasta was less cooked than usual, maybe a bit too al dente. Then again, part of the reason I like Otto is because I know I'll never get a plate of overcooked pasta. 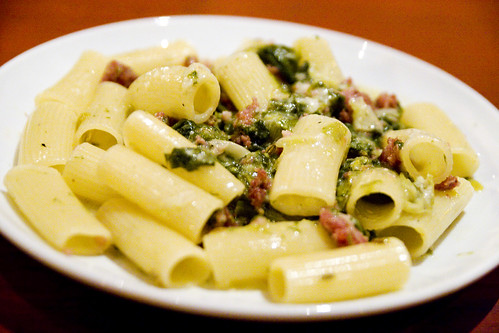 We finished our plates. I like that at Otto one pasta dish is just enough to satisfy. No grabbing your belly afterward in pain while moaning, "OH GOD, I ATE TOO MUCH," which happens about 50% of the time I eat out.

So we thought it was safe if we each got our own cups of gelato. That's what I've always done in the past, at least. 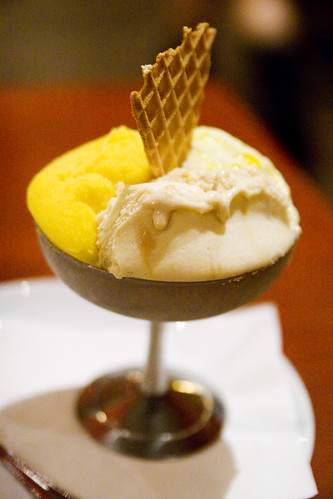 Olive oil, banana toffee, and tangerine for me. All awesome flavors, of course. As I've mentioned before, their sorbets are not to be missed—they burst with seemingly unadulterated fruitiness siphoned straight from Mother Nature's veins, if the fruit came in the form of a smooth, frozen flavored ice. They're also a good way to offset the richness of the gelatos. Olive oil has been one of my favorite flavors since the first time I ate it: It's super rich and creamy, but has just enough olive oil flavor to remind you, "Yup, that's olive fat," without making you feel like you're just eating spoonfuls of semi-solid oil. (Your opinion may differ; some people are overwhelmed by the flavor.) Banana toffee tasted just like what it was supposed to: banana and toffee. Most of the flavors taste like what their supposed to without being masked by over-sweetness. The only "bad" one I ran into was pistachio, but the last time I ate it a few years ago. Maybe it's better now? 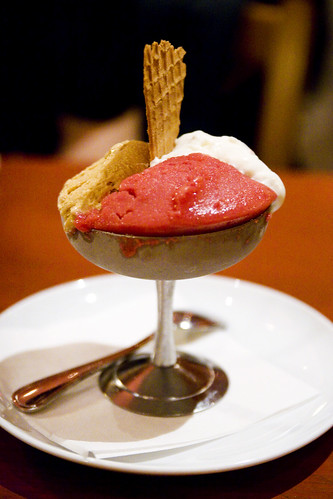 Blood orange campari, salted caramel, and creme fraiche for her. All great flavors I would order again (salted caramel in particular for its hint of bitterness). 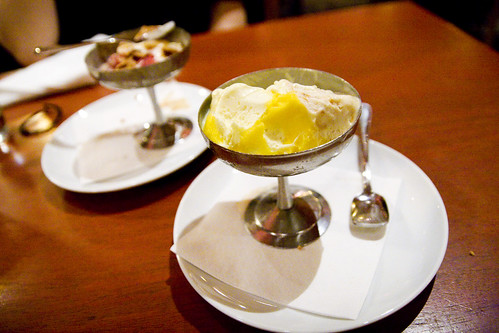 I took this photo to document the point when we both felt like the contents of our stomachs had transformed into lead. Every subsequent bite felt like a chore. The finish line looked so close, but the path was paved with that goo they put in sticky mouse traps, turning every step into a sweat-inducing task. Who the hell can't down a few more spoonfuls of gelato? It's not like we had a rack of ribs left; it's just liquid!...that's been frozen. If we had shared one cup of gelato, we probably would've felt fine. We also would've tried three less flavors, and considering it was Cheryl's first taste of Otto's gelato, that would've been a shame. Admittedly, I also wanted to try six flavors.

We hobbled out through the front revolving doors in a stupor. I felt pretty gross the rest of the night.

And what a strange (and tasty) meal that was. That we both went into the same food coma (was one stomach just sympathizing with the other?)—that we went into food comas at all. Granted, I've had many food comas in my life/the past month, but something about that one was unique. That it was so unexpected. Usually I just hug my belly, bring my eyelids down to half-mast, and think, "Well, crap, I did it again," but this time it felt less like my doing and more like Otto's doing. BUT OTTO WOULDN'T DO THAT TO ME. Right?

The next week I made it a point not to eat out for dinner on any weekday.

Related
Eating a Lot at Otto is Awesome
Not Eating Pizza at Otto (But Plenty of Pasta and Gelato)
Otto, Ginger and Spice, El Castillo de Jagua and Fancy Food Show aftermath

wow.. sorry to hear about your food coma.. the rigatoni with sausage and escarole look delicious tho!

Mmmmmm i'm so full, but that sounded super delicious! I love a good pasta!

Too much pasta? Too much slightly undercooked pasta?

Those serving dishes for sorbet are just awesome.

I had a similar experience after eating at the Elephant Castle. My boyfriend and I went for brunch and I ordered a basil and ricotta scrambled egg thing. It was amazingly good but I felt full all day and night which I found very annoying. My boyfriend thought it was funny, but I like to eat three meals a day and to be filled all day is gross. Maybe it is the ricotta, because I have never had such a big food coma after eating at a restaurant.
otto is my favorite Italian place too:)

Oh and your photos are so great. The fact you can make that pasta speak to me, when I know the light conditions were so low is superhuman.

Amy: IT IS DELICIOUUUSS! Sometimes pasta is so satisfying.

Jamie: Perhaps we can gooo there (the the Melanie)..and maybe I won't eat so muuuuch.

Su-Lin: Oh, I ended up finishing my gelato cup. That was just the point where I didn't feel so good. So..I ...really didn't feel right after that, HA HA uh crap.

I don't know if it had to do with being undercooked. Eek!

noble pig: I LOVE EM! The spoons are lovely too.

Ulla: I like ...not feeling really gross after a meal, hehe. I wouldn't be happy being THAT full after just brunch. Dinner is more like...well, I'll feel fine in the morning. :)

I'm happy to hear that the pasta SPEAKS TO YOU! Photoshop does wonders for low lighting situations... ;)

I know all about Italian food comas. There is a cool Italian place near my house (unfortunately I live about two states away from wherever Otto is) and I always order the same thing: Caesar salad (no anchovies), whatever the day's special risotto is, and cannoli (curse the stupid Ns and Ls in that un-spell-able word) for dessert. And I always have food coma afterwards. And yet I always do it again about a month later (it's fancy & expensive, which is why I don't go more often). Why? BECAUSE IT"S THERE!

Otto is one of my FAVORITE restaurants. I had the pistachio gelato last time I was there (along with the olive oil, of course, and chocolate) and it was delicious. Sorry you had a bad experience with it :(.

Man, I really want to try the olive oil gelato. I use olive oil for everything, that and sesame oil.

LaserLiza: I know I'll end up at Otto again despite food coma-age. But that has a bit to do with it being inexpensive...I don't wanna pay a lot to get bloaty! ;_;

Sarah: I'll give pistachio another chance!

maybe the fullness hit you a little bit later than usual. i hate the feeling of being overly full.

I adore greens in pasta! That's a combo that doesn't get enough play.

Louisa: I love greens in LOTSA THIIINGS! And by "things" I mean carbs. But yeah, I'd like more of it in pasta dishes.

Hi Robyn! I've always been a huge fan of food and your blog (and picture-taking skills) and I was wondering if you could take a look at the blog I just started and tell me what you think ^^; http://munchimonster.wordpress.com/ Thank you! =]

And, I've seen a lot of your posts on Otto's. Your pics make it look so painfully mouthwatering T.T I will totally save up my poor student lunch money and go there someday though!!

we <3 you, and JUST realized you are an NYU alum. we're two NYU girls, just starting our own food blog

keep up the inspiration woman!

Eileen: Thanks for reading my blog; I'll check yours out! And Otto is not too splurgy so you should be able to try it soon.

Perpetual Hunger: My inspirational stomach will be here for a loooong tiiime (I hope)!