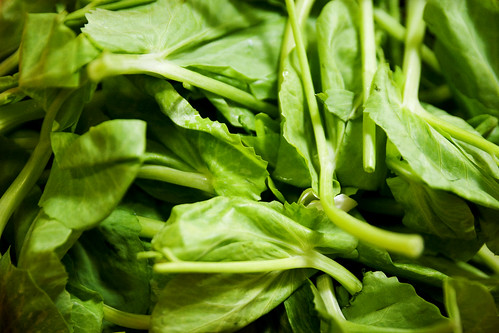 They give off an angelic glow. Or maybe that was Photoshop.

Twice in the past two weeks days I've detoured to Manhattan's Chinatown on the way back home purely driven by a craving for one thing: snow pea shoots (also known as leaves and tips). Not a pastry. Not a pig-derived product. A vegetable. After being briefly exposed to heat, these young plantling bits melt down and retain crunchiness in their hollow stalks while their leaves become soft, and release an addictively sweet, mellow flavor. When raw, they give off a hint of that fresh pea scent that makes me feel like I've shoved my face into a bucket of vibrant pea-enhanced sunshine. 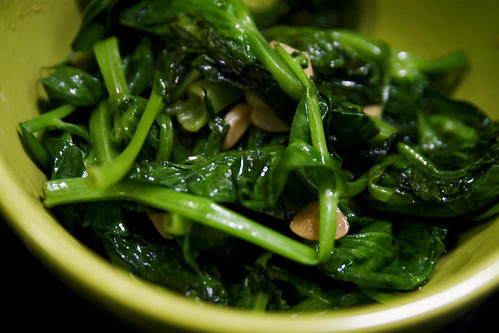 My first snow pea shoot dish only involved some garlic (unfortunately, garlic that had been sitting around for too long; I tossed it out afterward) and soy sauce. But it was tasty. You don't have to do much to pea shoots to make them palatable, which is good when you're someone like me and are as adept at seasoning food as a Parisian is at picking up their dog's poop. (I tend to err on the side of underseasoning when cooking without a recipe, thus resulting in a lot of bland food that I wouldn't even feed to an enemy. Not that I would invite an enemy into my kitchen. And not that I have any enemies. Um.) 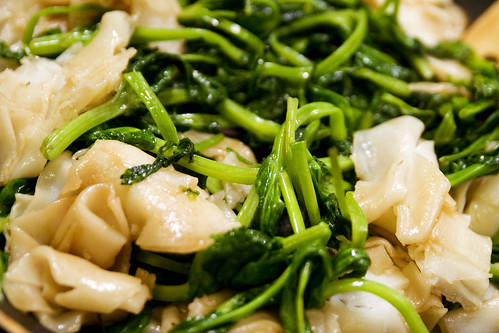 My second snow pea shoot dish included wide rice noodles, which I had never actually cooked with before despite it being one of my favorite carbs. Kathy suggested that I cut them into one-inch wide strips and fry them with some sesame oil and oyster sauce. I tossed in some snow pea shoots as the noodles developed a faint golden brown crust. T'was delicious.

Overall cost of these dishes? Not much. Snow pea shoots were something like $3 a pound (aka, a rather large bagful) and the rice noodle rolls were $0.75 a sheet. One sheet = one generous meal. Shove in a quarter- to half-pound of pea shoots and you've got...probably too much food. I felt uncomfortably full after my first plate because I failed to stop eating when my stomach said, "Um, I'm full. Like 'I want to puke' full. Could you stop for a bit?" But that's what I tend to do—eat everything. You can easily include meat/some other source of protein in this dish, if you want.

Snow pea shoots are available in Chinese grocery stores and produce stands—I'm not sure if you can get them elsewhere, or if you could, whether the price would be the same. I'm equally unknowledgeable about fresh wide rice noodles, but I've been aware of the vendor on the corner of Grand Street and Bowery for years. Get your rice noodles from her (she also sells the dried shrimp and scallion variety) and then walk eastward on Grand to find your snow pea shoots. I think I got mine from a market on the corner of Eldridge.

If you have good snow pea shoot recipe suggestions, comment away. HELP THE BOPPY FEED HERSELF.

On a completely unrelated note: I know your thing for meats and I just got back from Katz's Deli. HAVE YOU SEEN THEIR SALAMI MEATS?

I like pea shoots in oyster sauce and garlic. Toss in some cooked shrimp, green onion and peanuts, salt and pepper to taste and a little fish sauce. Then add rice noodles. YUM.

Consider this scenario: You crave some snow pea shoots (or SPS, as they're known on "the street"). You have no money to buy them. You try to rob a bank, but the police shoot you.

Out there, I know, but think about it.

If I see these at another table at a Chinese restaurant, I always end up having some at mine too! Delicious! Your rice noodle dish looks fantastic and I'm so going to make it!

I like my real plain as well...with sautee with garlic. U can also try the restaurant version - braise in some stock and maybe some mushroom as well.

I LOVE snow pea shoots! The restaurants only used to have them around now, but our favorite Chinese restaurant has them all year round as does the Asian market in Plainsboro. I just sauteed them with garlic and a bit of sesame oil. It's a good vegetable for kids who won't eat spinach or other green veggies. Glad you reminded me of them, I'm on a diet and need my dose of folates.

Emma: Yes I have. ...Katz's meats are plentiful.

Mahar: OO peanuts! I like the sound of that.

Mikey: I NEED MY SPS

Su-Lin: Your dish will come out better than mine, that's for sure. ;)

also unrelated but when in nyc last month bf and i went to tiam. oh yes. took me right back to the month i spent in israel.

I've always cooked them a few times, sauteed with a dash of sesame oil. A couple of times, they came out kinda stringy and impossible to break down just by chewing. I've never had them anywhere else, so I wasn't sure if they were supposed to be so stringy. Are they?

Mmm... pea shoots. Actually I think they're quite delicious just on their own with garlic. No need to do variations because that one variant can be satisfying for a long time! Sometimes I add it to my instant ramen though. Mmm... vegetables and MSG.

I love snow pea shoots as well. I don't always sauteed it but if I do it's with garlic and oyster sauce. I usually just boil it in water and a teaspoon of oil and dress it up with just a tad bit of oyster sauce or none at all.

I get confused about what these are when they're served to me, thinking maybe it's some kind of baby spinach. Now I know...

Oh these are really my favorite! I first had them at Joe's Shanghai when a friend ordered them off of the menu...just sauteed with garlic, and now I buy them all the time to do the same at home. Just the perfect veggie...easy and reminiscent of spring!

I finally got round to confirming what this is in Chinese, and yes, it is indeed my (and my siblings') favourite Chinese leafy green: 豆苗 dau6 miu6 (Canto), or dou4 miao2(Mand).
You should try 菜心 "choi sum". It's quite similar, but not quite as wilted-spinach textured when cooked.

I pretty much think that's the way Chinese people eat it; just sauteed with garlic. Otherwise, just blanched, I guess.

You've convinced me! I now must make a detour to San Francisco's Chinatown and pick up a heaping bunch of Snow Pea Shoots. My stomach is rumbling at the sight of the glossy, melt-in-your-mouth preparation with garlic and soy sauce. Simple & clean flavors...I can't wait! :-)

Beware the snow pea sprouts! For I brought them once from an organic market in Iowa, and they did not taste like snowpea shoots. They were earthy like sheep!

I find those rather fun. Malabar Spinach and Amaranth Leaves are tasty, too. I love how Malabar Spinach has this kind of gooey texture to it. Hmmm veggies. Sadly, snowpea shoots are expensive in placed no Chinatown :(. I think there's a place that has snowpea shoot and shrimp dumplings in Flushing. OOOH FOOD!

the other emma: Sweet! Glad you liked it.

Julie: Stringy? That doesn't sound right...it shouldn't be hard to break down at all. OH NOO WUT DID YOU EAT?!

I'm glad that my little cooking posts are welcome. :)

Danny: Oo yes, these would go nicely with ramen. I like shoving any sort of green in my bowl of MSG-laden ramen.

waisze: I haven't boiled! I can try that next time.

SuperChomp: YAY you are teaching me Chinese!

Stephanie: Bwahaha, you have been hit by the PEA SHOOT DETOUR. Sweeeet.

Jason: I don't know if I've had that veg, but it looks good! So I'm sure I'd like it. Ehhh? I've had show pea shoot and shrimp dumplings a few times at dim sum places; always good.

I am addicted to them too!
They have them at the two grand sichuans i go to. so yummy!

I don't just love SPS. I'm in love with SPS. I've only ever had them at a restaurant, sauteed with garlic. Soooooo delicious. Now, I must seek them out in Chinatown...

You gave me such a great idea for a simple Chinese - Indian fusion dish... Snow pea shoots sounds awesome for it!

$3/lb? For serious? That just sounds wrong, in Chinatown...
You reminded me that I do like these (simple, with garlic) and I should try to buy some on my next weekly trip to the Chinese supermarket. But... my question... how will I recognize them... it's very hard for me at the market with my no-reading-Chinese thing and the whole "I don't recognize a lot of Asian veggies raw"...

Yvo: I put in that first photo to help people identify the veg, but I also have this photo (I mean that supermarket labeled it but most places wouldn't). :[ I definitely took a chance the first time I bought it since I can't read Chinese and am pretty bad at ID-ing things. I got lucky, woo!

As for the price, considering how expensive the dish usually is in restaurants (like $12+ for a plate?) I don't think it's bad. Besides that would probably cost more anywhere outside of Chinatown.

I think the vegetable that Jason linked to is also called "on choy." It doesn't have the same spring green, fresh flavor that pea sprouts have, but it's nice if you like spinach texture with some added crunch from the hollow stems.

Katie: Thanks for the info! I likes me some crunch.

OMG snow pea leaves are like crack! I've never made them at home, only ordered them at Chinese restaurants, and they are TOTES expensive (like $14-16 a plate), but well worth every penny. It's amazing - I will push aside pork products and duck for these veggies. That's how good they are.