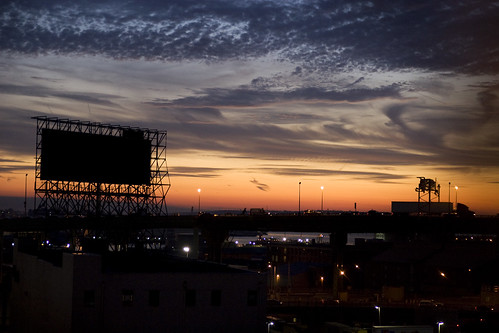 After two friends had canceled plans on me and I was stuck with the prospect of staying at home and feeling like crap or going out and possibly not feeling like crap, I chose the latter in a surprising decision of non-laziness and dragged my partially willing body to the G train to get to the Brooklyn Flea Holiday Market. With head flumped over, ears stuffed with earphones playing Fleet Foxes, and hood partially covering my grumpy visage, I felt that I had successfully gotten the, "Don't Come Within a Five Foot Radius of Me," look down.

But when I was about to get off the train, someone dared tap me on the shoulder. I turned to see the welcoming face of Erin and, back in the subway seat, Alex of Blondie and Brownie. WHAT DIMENSION OF THE G TRAIN HAD I STUMBLED INTO? The dimension where I sat almost directly across from two of the most awesome food people I know and was dangerously close to getting off the train without even acknowledging their presence.

They welcomed me as the third member of their League of Sugar-Hunting Awesome People. Grumpiness melted away, and all was good with the world. 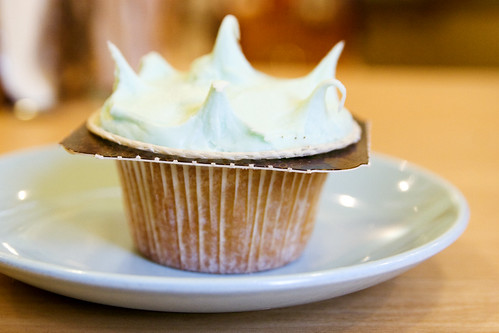 For my first bite of the day, I ate a vanilla cupcake from One Girl Cookies. The cake was heavier than most and not of the fluffy sort—cornbread-y, perhaps—and I thought it could have used more frosting to balance out the cake. Sweetness level was fine—not too much or too little. Overall, not bad, just an atypical in my history of cupcake eating experiences. 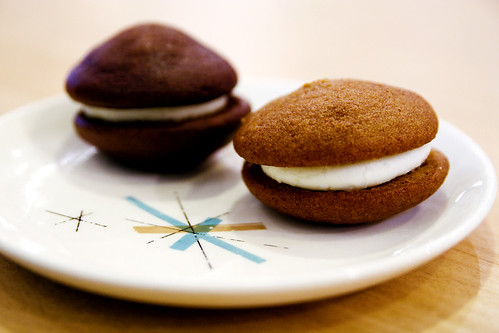 The pumpkin whoopie pie won the deliciousness contest against the chocolate whoopie pie. I think it was more moist...and it was pumpkin flavored, so it couldn't really lose. 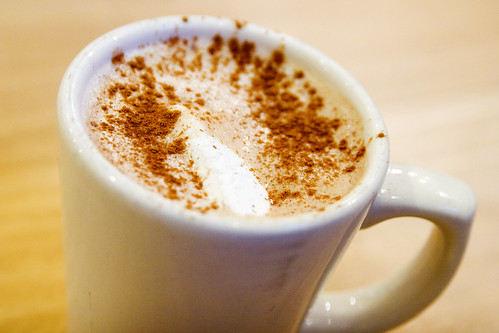 The main reason we went to One Girl Cookies was to try their hot chocolate as part of Erin's series of hot chocolate reviews. Unfortunately, it was underwhelming and not one we'd recommend. Stick with the baked goods. 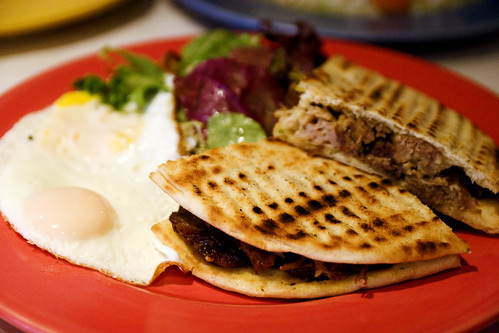 For real food, we ate lunch at Peruvian restaurant Coco Roco. My favorite dish was the roast pork pita sandwich—a simple combination of roast pork chunks in toasty pita bread...and nothing else—which was brunch-ified by the sides of a fried egg, salad, and alcoholic beverage deemed acceptable for morning intoxification. The roast pork could have been more moist, but it at least didn't leave the impression of stringy dryness. Yay pork, don't let me down. 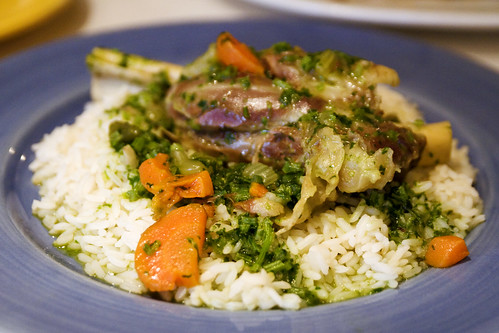 The goat stew was probably the best item we ate for being the most moist, tender meatstuff. (You know me: My heart belongs to pork.) The stew was supposed to come with some awesome mashed potatoes, according to Alex, but they ran out so we ended up with rice. 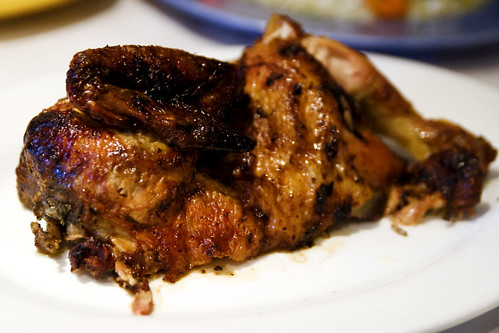 The three of us also shared half of a roast chicken. It was a bit on the dry side. Not bad, not awesome. 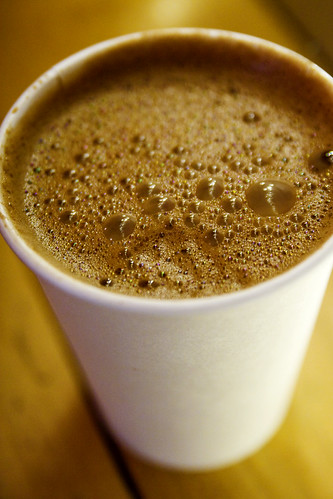 After making a trip to Trader Joe's, Erin and I parted ways with Alex to get more hot chocolate at Baked. Although Erin didn't write about it for our hot chocolate coverage, we approved it for its frothy and rich texture that wasn't too thick and, a plus for me, its not-too-dark chocolate flavor. 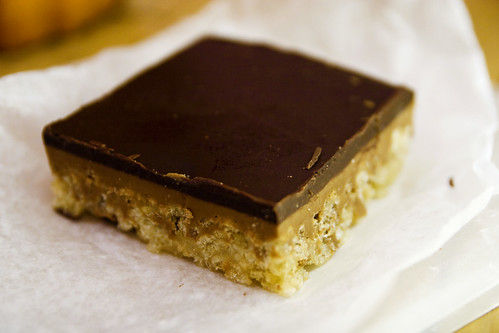 PB and chocolate and krispies, yes.

Also awesome and deserving of two thumbs up was the PB Krispy Bar, a rice krispies treat topped with smooth chocolate-peanut buttery goo and another layer of chocolate-buttery goo. Nicely balanced, not too sweet, and a pleasing combination of crunch, chew, and sweet, melty, peanut and dairy-based fats. 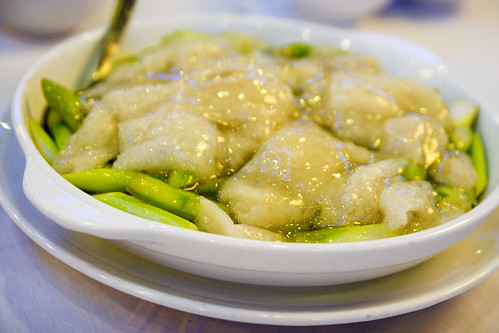 For dinner I went to King Star Restaurant in Sunset Park with Diana, Ian, Olia, and Jeremiah. This dish was called something like bamboo fungus with asparagus, which we probably only ordered to see what the hell bamboo fungus was (sounds way more appealing, albeit more boring, than the alternative name of "crinoline stinkhorn"). It's white, crunchy, and porous—nothing that you'd become addicted to, but it tastes fine. I don't know what the goopy sauce was, but I've had it in Chinese dishes before. "That viscous, semi-transluscent, color-less sauce that looks like alien amniotic fluid." You know the one. 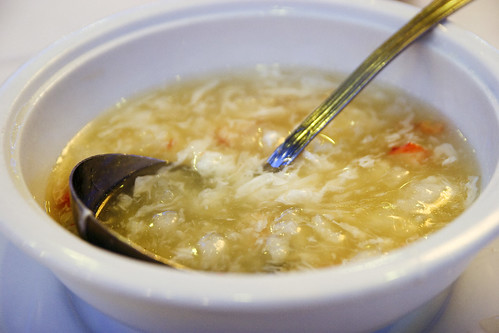 Another new dish to me was fish maw soup, maw being the gas bladder of a fish. The maw was cut into small pieces; I can't really recall the taste. It was probably more of a texture thing of the semi-chewy and crunchy sort. 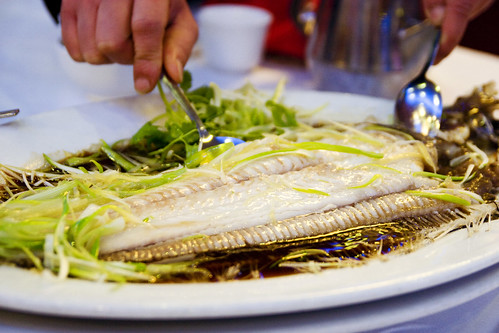 One of my favorite dishes in the history of the universe is the simple steamed flounder in ginger scallion soy sauce. Its light, sweet flesh soaks in all the ginger, scallion-y goodness and is as soft as a baby bunny's bum. Or something like that. It's something I only eat with a group of people, but I'd have no trouble eating a whole fish on my own. 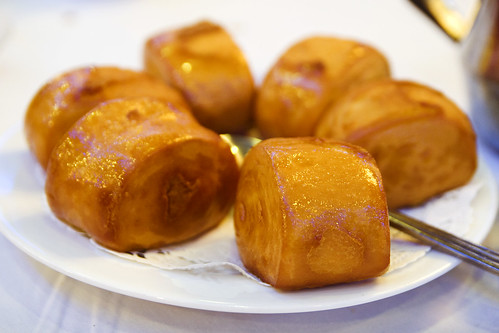 While we would've been satisfied just eating sweet hot red bean and tapioca soup for dessert, we couldn't ignore the fried mantou with condensed milk that I spotted a waiter carry to a neighboring table. I must have a radar for little golden buns of deep fried crispy goodness. Or fried things in general. Probably the latter. 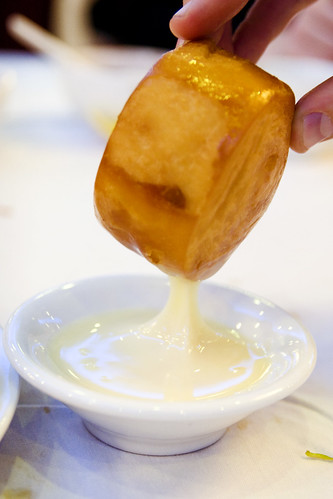 Yay, finally a new entry with dessert-type stuff :)
I now have an enormous craving for the PB Krispy Bar... Wonder if it'd be hard to make those at home.

i'm not gonna lie - it's 9:30 a.m., and the prospect of consuming bamboo fungus and fish gas bladder is grossing me out the teeniest bit. however, i think the pb krispy bar more than makes up for it. :)

The good part: It all looks great, apart from the chewy fish bladder. Buns of HAPPINESS! The bad part: I have to make dinner now, and everything in my kitchen looks rather pale and boring in comparison... I might have to go to the bakery later.

One Girl Cookies is responsible for my addiction to their Lucia cookies: tiny 1 inch cubes of shortbread, caramel, chocolate and what I suppose you kids would call awesomeness. I usually buy them at Dean & DeLuca and I'm not at D&D that often so I have not turned into one giant Lucia myself. But if I ever move closer to Brooklyn, ALL THAT COULD CHANGE.

Those whoopies look like such fun. Like, s'mores-y type things?
There is no better way to have fish than steamed, Chinese style. Dover sole was always my favourite when I was younger (kids? That eat fish? With no qualms? Devil child!)
Generally, the shiny "sauce" is just made by putting a bit of water/stock in, then adding a cornflour/potato starch solution to thicken it up. It's flavoured by whatever you're cooking and condiments you add. Seafood based ones are pretty awesome.

Holy cow, those mantou things look amazing. I love coming here and finding out about food I never knew existed.

That steamed fish looks delish, too!

Maja: I was going to say that it looked easy, but then I came across Smitten Kitchen's post about making it and...uh...I guess not. :O

the sassy kathy: Haha, I'm glad to hear that. I don't break out the fish bladders and fungus very often!

Kåre: You're SURROUNDED BY BAKERIES though, right? Unlike meeee. ;_; I hope you had a good dinner! IF ONLY I WERE THERE TO MAKE IT WITH YOUUU!!

Annie: Holy crap that sounds good. Sounds like I have to go back for mooore.

I ate sooo much fish as a kid, to the point that I got sick of it (mostly salmon; my mom loved...salmon). I rarely eat fish these days though, so I like it when I get the chance.

That shiny sauce description sounds about right. Since the sauce tastes quite mild.

Carl: I have edumucated you!! Just a smidge. I'm not sure how useful the knowledge of fried mantou will be.. ;)

I absolutely LOVE that picture of the sunset. Not only do you have the warm sunset on the horizon, but you have the cooler sky at the top. It's beautiful Robyn! *tear*

The food... meh. Nah, just kidding. It all looks good, especially the fried mantou, which I have yet to try. Mm.. condensed milk.

Bamboo fungus is one of those things that's more about texture than flavour. It's really just a sponge for sauce.

And what is this morning alcoholic beverage you speak of? Have you been converted??

I've had the pb krispy bars topped with chocolate from bake sales. They're a midwest staple, I think. But there is a local ice cream place that has the -best- soft serve in the world, and is only open in the summers. They make a krispy bar sandwich which is two peanut butter krispy treats sandwiching a layer of soft-serve ice cream. Serious yum.

Oh my gosh...I just made those PB/chocolate rice crispy bars from my new Baked cookbook! Glad to know mine turned out looking just like the ones they sell in the store! It looks like you had fun!

the "goopy" sauce is meant to be corn starch, a bit of salt (maybe) and chicken stock.

The knowledge of fried mantou is terrible. Now I think I have to make some.

Oh and by the way, I wanted to thank Kate for her recommendation of Richport Pastries to pick up a cuban sandwich. I've had two since her post back on Dec 16th...the best way to pick up lunch at the public market! :)

Christine: Every now and then I throw in a non-food photo as a curveball. AND YOU LIKE IT, HOORAH.

piccola: I don't remember what the alcoholic beverage was...doh. (I think Erin and Alex drank it though.) I'm not close to being converted yet.. ;_;

Lindsay: You must've followed the directions perfectly! If i made them...they wouldn't come out right, I'm quite sure. ;) But I really liked them so now I want to try, eergh.

Mel: Thanks for the info!

Carl: I want a full report on your fried mantou making experience. Even if it's not for a year from now. I WANT TO KNOOOW.

I love your alien cupcake! ...and the bamboo fungus with asparagus does glisten. To think that you almost walked off that train. I guess you were predestined to eat that glorious smörgåsbord.

Not so sure on the fish bladders...

Kate: It ain't a vegetable! ..It is undecided.

I was just thinking; your title for this blog entry sounds like one of those "Which One Doesn't Belong?" puzzles we all did in kindergarten. (:D Three food items... and the internal organ of an aquatic creature lol

PB Crispy Bars are practically the official dessert of Minnesota! I ate hundreds of them in my younger years.