Out of all the kitchens I've ever been in, the Jones' family kitchen is my favorite. It's not just where food is cooked and kitchenware is stored—it has its own warm personality. And hanging baskets. And a pantry stocked from floor to ceiling with everything you could ever need. And a gazillion drawers also full of everything you could ever need, but isn't edible. It's a place you want to hang out in, not just cook. And it's clean. 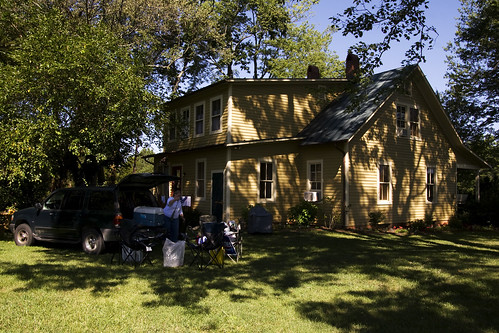 But on our last day in Louisa, we—Tristan's family, Tristan, Lihan, Lee Anne, Ryan, Dan, and me (Katie had already left, wah!)—went out for a special brunch instead of a home-cooked meal. So after saying goodbye to the happy yellow Jones abode... 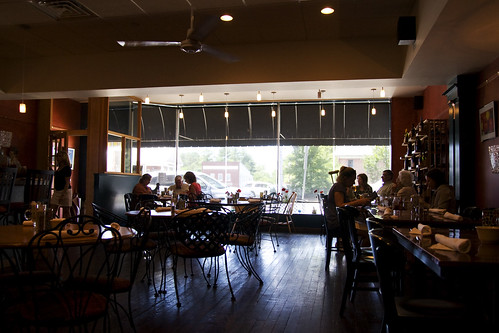 ...We went to downtown Louisa to eat at Obrigado (which means "thank you" in Portuguese), a surprisingly upscale (but casual) restaurant to have in a town with a population of less than 2,000 people. Since the last time I ate there, they added the most glorious of carnivorous foodstuffs: BARBECUE!...only available few days a week. Unfortunately, Sunday wasn't a Holy Day of Barbecue, but maybe a subsequent visit to Louisa will include some of their pulled pork and beef brisket. 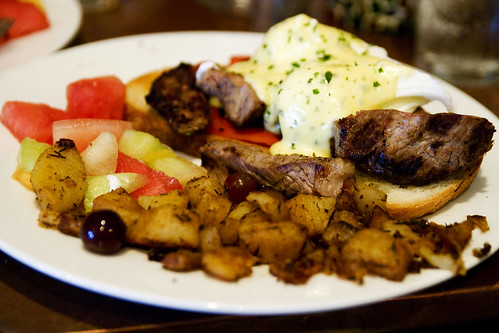 I AM TRYING TO KILL MYSELF WITH DELICIOUS

I rarely eat steak. I rarely eat poached eggs. Yet I ordered the steer in the hen house, or grilled steak with poached eggs. My top choices were down to either that or a hamburger, and I figured with the opportunity to eat steak and eggs as my first meal of the day being a rare occurrence, I should take the chance now—while my heart is still young and up for a beating.

Surprisingly, it wasn't as rich as I thought it would be (at least, that's what my taste buds said; my digestive system may have been in the throes of discomfort). The steak was moist and tender and the poached eggs were perfectly plump with giant bellies of thick, molten golden yolks. Even the grilled bread was great, buttery and substantial enough to hold up to yolk and hollandaise drippage. I felt a twinge of panic when I realized I should have eaten the fruit salad before everything else—because it digests the quickest—but I was already eating steak, eggs, and potato in every other mouthful, so...whatever. The human body can handle worse things—it's built to endure. And that's why we're taking over the earth and destroying it. Weeee!!!! (Actually, bugs will probably take over the earth and destroy us. Hopefully, I'll be dead by the time that happens.)

I didn't take a photo of it (GASP, OH NOES), but Lee Anne shared her side order of Virginia country ham with me...and it was awesome. And that's coming from someone who doesn't even like ham very much. How could someone love pork but not ham? (I'm also not a big fan of cured Italian or Spanish hams, or plain bacon. I know, I'm crazeh!) It depends on the levels of saltiness and smokiness. Or preservative-ness. Or something else that makes me not like ham. But this ham was awesome. It haz a flavor. I'm probably too used to crappy ham or something. 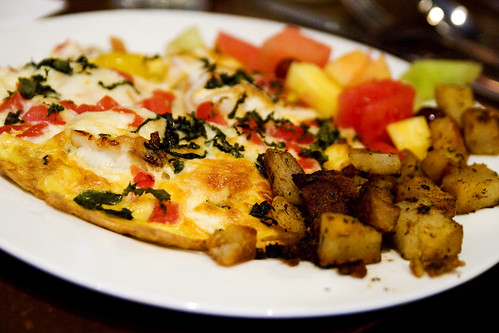 The special frittata of the day was the seafood frittata. I didn't try it, but I took a photo of it, SO I MUST SHARE IT WITH YOU.

I didn't take photos of everyone else's entrées. That would've been nuts. 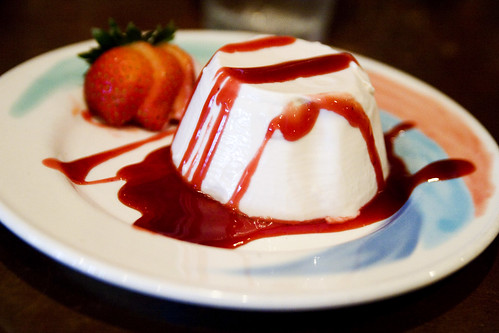 I love it when a dessert menu has panna cotta; that means I don't have to think about what to get. It's one of at least two golden dessert rules I just made up now: If There Is Panna Cotta, You Must Order it. (The other rule is, If There Is Pistachio Gelato, You Must Taste It.) For the panna cotta uninitiated, I usually describe it as flan-like, but not baked and set with gelatin instead of eggs, making it especially smooth and jiggly. So it's really not like flan or custard. But it's a satisfying enough description until the panna cotta virgin tries it for the first time. Obrigado's panna cotta was silky smooth and thick with a strong flavor of heavy cream...aside from the sugar and vanilla. I wouldn't have minded a touch more sweetness, but it's better to be a little under-sweet than too sweet. Not too light, not too heavy—I always feel like panna cotta is "just right," 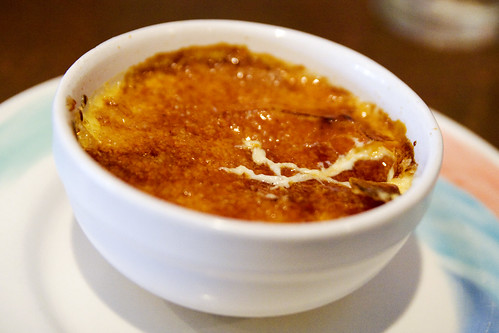 This is Tristan's dad's creme brulée, post top crust-crack with bits of creamy goo trying to burst forth. 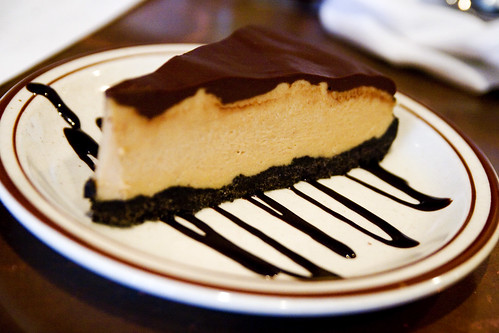 It was no surprise that Tristan went for the chocolate peanut butter pie—peanut butter is his favorite food. Besides kimchi. This pie was 1000% win with its chocolate cookie crust and milk chocolate-topped creamy peanut butter filling.

After brunch, the Jones clan, the Ryan-and-Dan clan, and the NYC clan parted in not so teary ways. But huggy ways. Many hugs.

It's a good thing I had an overly satisfying, gut-busting brunch at Obrigado, as the rest of the day's vittles during the seven hour drive back up to New York consisted of pita chips, pretzel chips, and grapes. Of course, we didn't have the foresight to bring them; Olivia's mom gave them to us when we picked up Olivia at her house. I arrived home—New Jersey-home to return the car back to my mom—sometime closer to midnight. Sleeping in my old bed had rarely felt so comfortable.

"Tristan went for the chocolate peanut butter pie"
OMG I never even knew such a thing existed, but as soon as you said it, it made perfect sense.

My Friday night schedule is now FULL. As I will be.

I LOVE creme brulee! Had crap food today so am a bit sad to be reading all this stuff going on. It makes me so jealous!

But on the (un)healthy front, you really should try some flan made with duck eggs and water buffalo milk. Worth every single calorie.

Great, now I want steak! The seafood frittata looks really good, and the plating of the desserts is cool.

Obrigado is my wife and i's favorite place around.

next time get them to take you to Pomme in Goedonsville....sooooo good. and i was almost the exec. chef there so is much love for it.

omg, it kills me just looking at your plate of deliciousness. i lub pistacio gelato! what a fun trip!

Christina: ! like the baskets too, but I wonder what they do with all of em..!

Walker: Did you have the bbq at Obrigado too? I'd wanna know how it is. :D

maomau: I love it when people say lub. heehee.

I love love love your blog. Thanks for visiting Toronto - next time you come; there are lots more places to try!!

I just adore the baskets haning on the ceiling of that kitchen! Lovely!!!

Foodhogger: Thanks for reading! I definitely have to make another trip to Toronto...with more food. :)

Didn't have the BBQ there yet, but since i have my own BBQ co. (skinny boy BBQ) i really need to get there and try the competition.

Hooray for kitchens you can live in! If I could change one thing about my little condo, I'd make my kitchen more live-in-able, and even eat-in-able.

Those desserts you photographed are three of my favorites. I would've ordered all three. Maybe.

Woop. Finally finished your Louisiana saga. I don't know which of us is worse for taking such time to write it/read it, heheh. Just kidding :P

Sounds like an awesome trip. I like the idea of a roadtrip, but I don't think I can do a seven hour journey in the UK. I think I'd fall off the map...
Anyways, oooh, proper American countrysideyness! The county fair looked like tonnes of fun. Livestock yay! Cuteness might be related to tastiness, but I don't want to test the theory by eating a kitten ;_;
I really want to try this Rita's water ice stuff now since it's lactard safe, but I wonder whether it would be any good without the custard :/