If you want me to go out to Forest Hills, Queens, just entice me with Uyghur food. Or a bucket of money. Or a unicorn. But Uyghur food would probably be the easiest to come by. 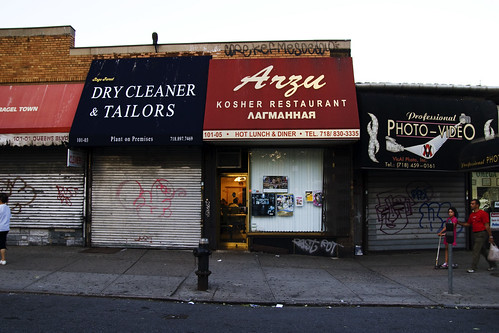 Cafe Arzu may not look like much from the outside, squished between a dry cleaner and photo-video equipment store on a desolate-looking block where seemingly every other shop was closed, but step inside and... 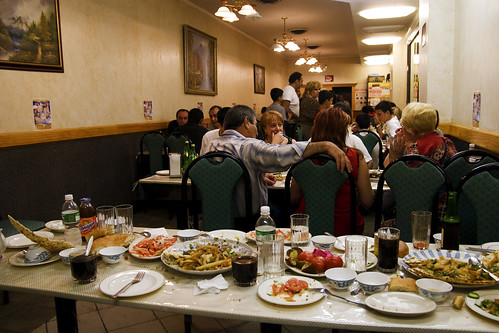 ...It's a hopping place! Or at least far from empty.

Lee Anne, having actually been to the homeland of Uyghur cuisine (Xingjiang, the north west part of China) and politely forced to eat much of their food, was given the task of ordering for our party of six. She would be the key to our successful dinner. No pressure...no pressure at all. 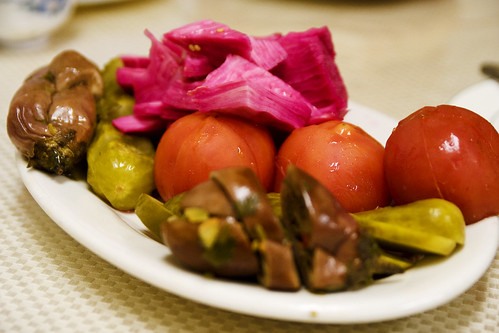 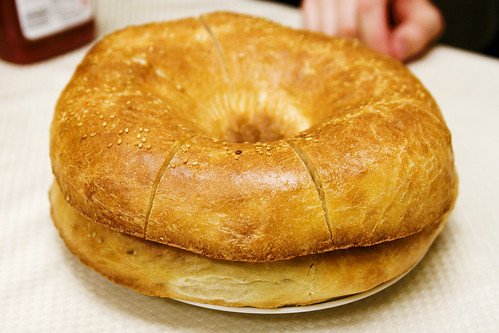 The lepeshka, a tire-sized, sesame seed-sprinkled round of bread, was deliciously crisp on the outside, soft and slightly chewy on the inside. You know bread's good when you don't even need butter or oil to go with it (not that those would've hurt). 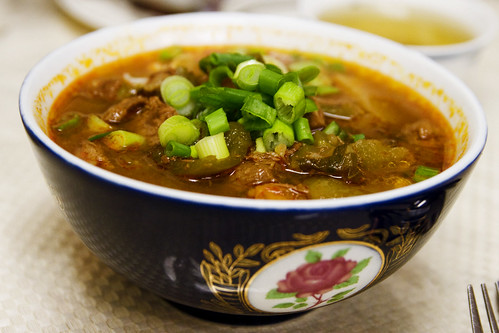 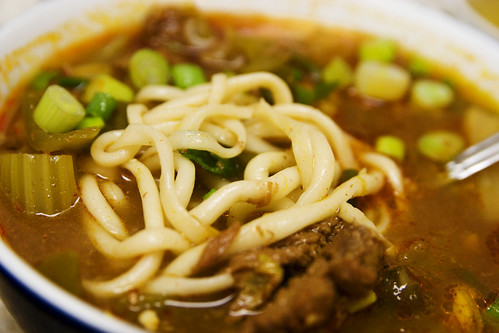 I love things that come in giant bowls. 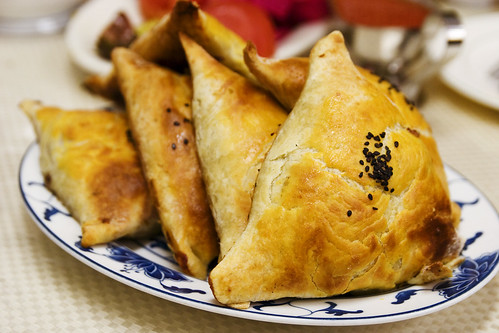 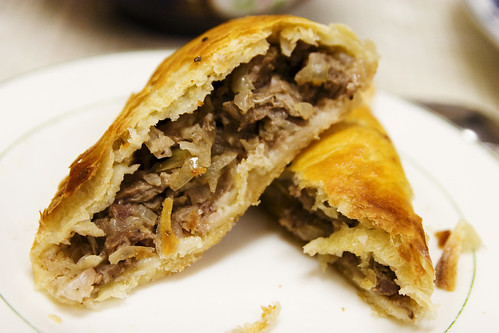 It was hard to eat more than half of one samsa, sporting a heavy combination of flaky triangular pastry stuffed with a mixture of chopped lamb and onion. ...But I did eat a whole one, because it was tasty. 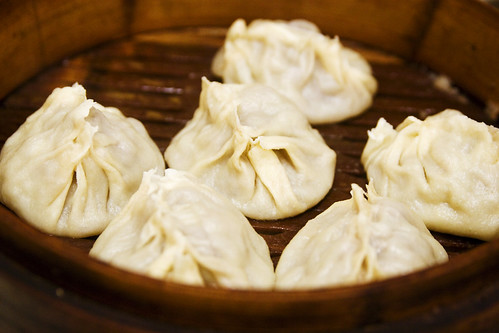 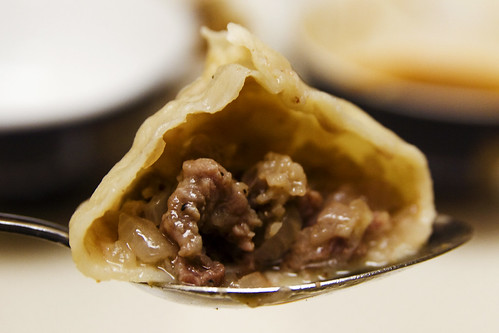 The manty, which look like soup-less soup dumplings, seemed to be filled with the same filling as the samsa. Meat + dough = yay. 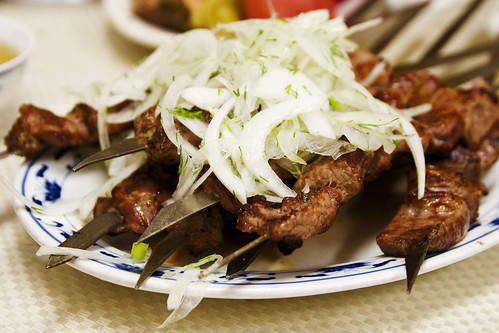 Meat + pointy metal stick = also yay! Perhaps even yay +1, if the meat is right. And all was right with the surprisingly freakin' awesome lamb shish kebabs, surprising because I didn't expect each lamb chunk to taste like a lamb sponge saturated with lamb juice, with each bite through the pillowy soft meat (pillows...PILLOWS) releasing a gush of...lamby juices.

Yeah, that's the best description I can come up with. In conclusion, ORDER THIS. ORDER THIS, IN CAPS, AND STRONG TAGS.

This photo of Lee Anne and Poonam was only 100% staged. A little bit of everything remained at the end of our meal. One samsa. One dumpling. One meat chunk. One...loaf of bread. We tried, oh, how we tried. And we weren't allowed to leave without the extra lepeshka. No really, the waitress was semi-horrified at the idea of it being left behind. Lee Anne ended up being the designated Keeper of the Loaf.

All that deliciousness for $14 a head—this dream can too be yours to fulfill. As long as you have at least five other friends to help you reach your goal. Do it. Now. On the way back to the subway station, we passed Martha's Country Bakery, aglow with happy baked goods-derived sunshine, even after 10 p.m. This could be suspicious—aren't bakeries supposed to have exhausted their supplies of tasty treats by that time?—but man, when I want a cupcake, I just don't give a crap. 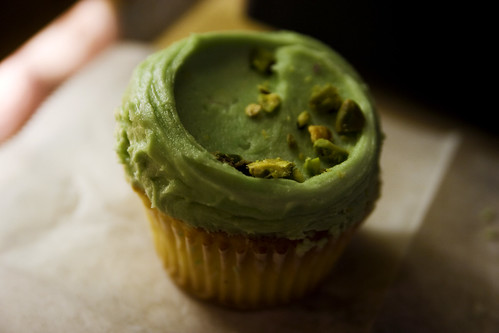 Pistachio cuppy cake, your doom is near.

Now that I've had two experiences eating cupcakes from Martha's, I'm pretty sure that it's my favorite cupcake in the city. Not that I would tell people to trek out to Queens to get it, nor would I; I mostly like cupcakes when they're conveniently located. But what do I like so much about these cupcakes? The cake is light, moist, and tender (Olivia compared it to an angel food cake) and the frosting is smooth, creamy, and not tooth-achingly sweet. It's a well balanced treat. Full of sugar.

I would be willing to recreate this night of noodles, skewered meats, and cupcakes in the future, in case anyone else is interested.

GAH! I have been craving those pickles ever since that meal!!

Sign me up for the next trip! I put Martha's on my list last time but then I fell in love with Pinisi and spent the duration of my trip cramming cake into my mouth whenever a sugar craving hit. That all looks so good!

I think it's hysterical how well the Asians and the Jewish mix and meld so well. Between the jokes about going to Chinese restaurants on Christmas and this one proudly proclaiming it's "Kosher-ness" -- add to it the fact that my (Chinese) sister just married into a Jewish family! It's as if the gods are smiling upon us.

And with such beautiful foodie photos -- I'm convinced that you've experienced heaven on Earth. I want to dive into that bowl of noodles and swim around in it's savory goodness.

If you took the lepeshka, you might as well have taken the other leftovers. I can hear their cries of sadness at being left all alone without their friend Leo the Lepeshka. It makes me a little sad.

I had no idea lamb was used in Chinese cooking!

How do you find these places?
Amazing!
:)
Great post!

That Lepeshka was too much for me to handle right now! YUM!

Isn't it funny that a samsa is kind of like a samosa...I wonder if they are dumpling cousins.

Those meat sticks sure are pointy.

Uyghur is such a fun word to say. I don't think I say it right. But it's still fun.

Olivia: Just the pickles? ..Well yeah, they were tasty pickles.

Santos: MEBBE!! Sounds good to me.

Steph: Speaking of swimming around in broth and noodles, I found out that there's a themed spa in Japan where you can swim in ..ramen! Kinda.

Mikey: They didn't cry; I removed their tear ducts.

Jenneke: Pickles for breakfast! I'm down with that.

Julie: I haven't had that many Chinese dishes with lamb, but it happens! Some..times.

Ulla: The internet tells me everything! I'll let you know the next time I plan on having a Uyghur outing. ;)

Yas: Oo, perhaps they are cousins!

I have a question, where the heck is the B-Line at the Shake Shack? Is it the window next to the main line? Everytime I walk up to the line, I'm confused as to where the custard line is! -=( it makes me sad cause I walk away empty handed.....I want me a yummy custard....

I don't know you or your blog, so I am sorry if
this offends, but I have to say, I live and work in Forest Hills and have had numerous items from Martha's at various points in time since they opened about a year ago and have enjoyed little if anything served there. The place looks nice, the stuff looks nice, the stuff is fresh, but it's not full of flavor and is mediocre at best. I would urge Manhattanites interested in good cupcakes to stay in Manhattan and frequent one of the dozens of cupcake bakeries that seem to abound there. And if you ask why I went back after being disappointed once, long story short, it was to be fair and give the place a second chance after it had been open awhile.

astrid: Your friends wouldn't wanna eat at a Uyghur restaurant? TIME TO GET NEW FRIENDS!

wonders: It's right next to the A line!...or should be. :O I haven't been there in a while but if there's a sign that says to go to the B line for custard, it's probably there. I hope you get your custard!

ShaynaMadel: Ooh, I haven't had anything at Martha's besides the cupcake, so I wouldn't know how good the bakery is overall. :O But their cupcakes (which I've now tried at both of their bakeries, if that's enough experience) were better than most I've had in NYC. And I've eaten a lot of cupcakes, heh. Maybe it's just the cupcake I ate...hm.

Uyghur? Wha? Where do you hear about stuff like this? I feel so lost! and hungry! dumplings!!!!!

Danny: THE INTERNET!!! :D It tells me everything.

Hey! I just stumbled on your blog via seriouseats and i love your photos. forest hills is really out of the way for me but someday i think i'll take some time to try Arzu. it looks delicious.

um, i'm mesmerized by that picture of the bitten-into dumpling. whoa. WHOAAAAAAA.

Just wanted to say CONGRATS to Serious Eats for Times Magazine Top 50 sites of 2008 status. Is that link going to work or will it break things?

You should do a food tour of Washington D.C. sometime soon. We have foods!

I second Santos' guess that the brown vegetable is a small eggplant. Wow. What a great restaurant visit. "Samsa,Manty, Shish Kebab!" This should replace all high school cheers in the U.S.,don't you think?

Becky: It's delicious! Wrangle up a group of people and go!..:D

We Are Never Full: It's just too bad that the pic of the dumpling isn't life-sized. (At least, not on my huge monitor....bwaha.)

Anna: Thanks for the congrats! We had a little celebration for that in the office!...well, not really but we cheered ourselves and then continued bloggorizing.

YES I do wanna go to DC and food! And you will show me the good eats! Bwaha! I should be heading down to Virginia in August, meaning that I should stop in DC. I need to go back to Dolcezza and get some tasty gelatooo.

AuntJx: That would be a pretty cool cheer. Accompanied by the cheerleaders throwing the food into the crowd's open mouths.

Queens has some great food. You should try this Chinese-Indian restaurant in Elmhurst sometime, but I forgot the name :( Doh!

Patty: I've never had Chinese-Indian food before! If you remember the name, let me know. :)

Robin, you make me wish I'd never left New York. I moved from Kew Gardens to Manhattan around the time of the great influx of great, obscure ethnic restaurants. Wahhh!

P.S. Wish you were coming to The French Laundry!

Carol: I too wish I were going to the FL...I hope to hear an awesome report of it after your meal!

The pointy stick meats remind me of Middle Eastern kabobs...

The samsas remind me of Indian samosas...

The bread...well it just looked like a giant bagel!!

And all of this at one wonderful place!

the only indian-chinese place left in elmhurst is tangra masala (which has been around for awhile); chopsticks closed last year and I personally liked it much better than tangra masala or many of the places in jackson heights. but tangra masala will do; order your stuff dry and it'll be delicious.

I live in the area but never ate at arzu; down for another? a group effort of course

Kate: It's just missing some deep-fried foods. Then I would've been in heaaaven.

avisualperson: Thanks for the rec!

Next time I feel like going to Arzu I shall announce my plans and get all the Forest Hills peeps together.

How good does this look? I am salivating!