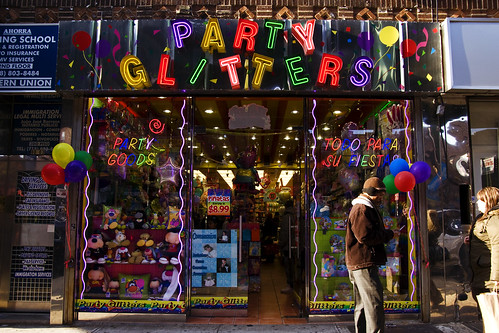 But first, there was Party Glitters.

Party Glitters is not just a store—it's an unintentional work of art. You can't miss it...unless you're blind. And even if you're blind, you'll still be able to sense the spastic bright neon shiny rainbow presence exuded by the store's awning. And by "sense," I mean that you'll feel the burning sensation in your corneas.

While roaming around Queens to kill time before dinner (this being the same day we feasted on cortido and Mister Softee), Rebecca and I peeked into the store to find lots of supplies for the party we would never throw. If you need plastic doo-dads to decorate a wedding cake or baby's birthday cake with, this is your place! Are people only getting married and having babies? Is there nothing else worth celebrating? Noooothing?

Actually, there was way more stuff that that; I'm just choosing to ignore them. There was one funny thing I almost got for a friend as a joke (not related to legalizing unions of love or popping out spawn), but decided against it. I can't say what it is though—I'm still thinking of getting it and I can't ruin the surprise. If I do get this special somethin', I'll let you know later on. I can haz a bailarina?

There was this random sign. I don't know Spanish, but my online translation skills tells me that this place wants dancers. Or something. I just hope the dancers don't look as disproportionate as the one in the illustration. 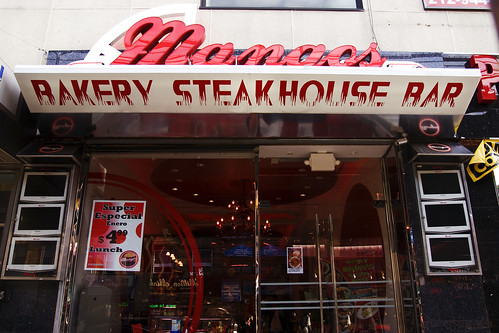 Is Mangos not the most intense BAKERY STEAKHOUSE BAR you've ever seen? Maybe they only come in "intense." I know the sign is supposed to resemble fire (...maybe), but it reminded me more of dripping blood. Although you can't tell from this photo, the inside of the restaurant was mostly red and highly reflective, a combination that didn't strike me as all that comfortable. However, it did intrigue me—god knows nothing gets the digestive juices flowing like a trifecta of baked carbs, slab-o-meat, and booze. (Actually, I am somewhat interested after reading this review...we'll see.) Here's a Mini Picanteria el Guayaquileno truck. Half dipped in purple. There was food on the other side but I wasn't hungry enough to eat it (at least, I didn't want to ruin my appetite for dinner). Maybe next time. 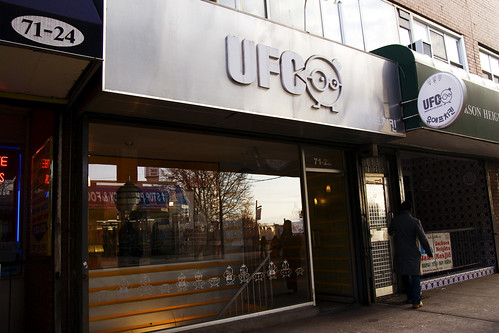 Rebecca and I went to UFC (Unidentified Flying Chickens...yes) to stuff ourselves with a wholesome dinner of fried chicken, sweet potato fries, and pickled radish. But mostly chicken.

The top level of the restaurant is for take out. If you want to eat in, you have to descend into the basement level where you are shielded from the inconvenience of having to look at the outside world. But don't worry; there's a flat screen TV to keep you occupied. While we were there, it played Happy Potter and the Goblet of Fire and Accepted. I'm not sure who chooses the movies. Or why. (In general I don't understand the point of having flat screen TVs in restaurants. Even though I don't have to watch it, I can't help but take a look every now and then. The pictures, they move!) We started off with sweet potato fries, surprisingly the first batch of sweet potato fries I've ever eaten that were opposite of resembling flaccid worms. Score! They were long and super-crispy, almost to the point of being potato chip-like at the sticks' extremities, but they still had semi-soft innards. I'd order them again. All chicken orders come with a choice of pickled radish, coleslaw, macaroni salad, or small garden salad. I gravitated towards the pickled radish for something sweet, tangy, and crunchy, which I thought would go well with sauced up, deep-fried chicken. 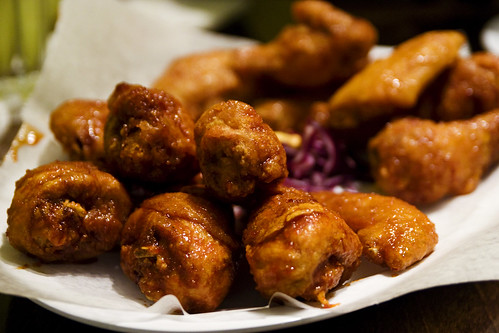 Our large wings and drumsticks combo—eight wings and six drumsticks flavored in half hot sauce, half soy-garlic—ended up being more food than we could handle. In the end we were left with one lone drumstick, but this was after we had stuffed ourselves just a smidge beyond full capacity. You're probably supposed to stop eating before you're within an inch of reverse peristalsis.

The chicken definitely hit some high level of tastiness for us to eat that much, but I didn't think it was as good as Bon Chon, previously my only Korean fried chicken-eating experience. Bon Chon filled my head with glorious memories of juicy, deceptively light chicken meat that appeared to have the power of self-detachment from the bone. UFC's chicken was also juicy and easy to eat off the bone (something I have a lot of trouble with), but it wasn't quite as light (UFC's skin was thicker) or tender as Bon Chon's. I also felt that UFC was a little heavy on the sauce. If we hadn't ordered half hot, half soy-garlic, I would've felt overpowered by one or the other.

I don't know who makes better Korean fried chicken (for more information about Korean fried chicken, read this New York Times article), but I prefer whatever Bon Chon does over UFC. You may think differently. As for the restaurant I'd rather eat at, UFC is the easy choice; Bon Chon has this loud music, industrial bar/club aesthetic going on that feels out of place when you just want to eat some fried chicken. Also, Bon Chon didn't give out pickled radish (included with the chicken, at least), and their fries sucked. But if I could just transport Bon Chon's fried chicken to UFC...that would be awesome. For no reason, here's an amusing sign we say while walking back to the subway station. If you want the best straight perm America has to offer ("And Shining Too"), Queens is where it's at.

You couldn't finish that? I thought you had to be strong to go into the UFC...

worst joke ever. i apologize.

Anybody reading these comments from London? Where do I find Korean fried chicken in London?

Gah, we have way too many of those cheap fried chicken chains and not enough that offer fried chicken in hot sauce and with pickled radish on the side!

Hey, thanks so much for the referral in the Mangos piece. Yes the place is totally worth checking out. I suggest viewing "Chungking Express" first, to get the full effect of the strangeness of the place.

Your photo of Party Glitters just brightened up my day. And I'm drooling over that fried chicken!

Dude, there are so many of these, "i wish they would merge" type of restaurants... if shake shack would marry pomme frites???? I would probably die in joy or something.

And those pickled raddishes are crucial when eating fried chicken. It just refreshes your mouth and gets you ready for more chicken... mm.. chicken.

I just found this site because I'm hungry. Dude, how do I get to be friends with you guys? I want pork party.

I've been meaning to try UFC for a million years now, but I always pass it on my way to someplace else to eat.

I've only been to Bon Chon once, and a while ago, but I swear they had pickled radish too.

Vince: I had to look up UFC to understand what you were talking about...HAHA...I fail. :(

Su-Lin: I wish I could help you out! I hope you find something good in your area.

Elaine: You seem to be the only person who's blogged something substantial about the restaurant! I'll have to check it out next time.

The radishes really help it go down smoothly. Or semi-smoothly.

chinolam: JUSTICE OF THE UNICORNS IS SUCH AN AWESOME NAME!!!

..On that note, it's funny you mentioned a pork party because tonight I'm eating at a place called PIG HEAVEN. Bwahaha...pork party right there. I'm up for eating wherever. Whatever. Or. Stuff. Just let me know where...when..what. My friends are into the pork parties.

Krista: Oops, I hadn't thought about whether they served pickled radish at all...I was just thinking they don't give it to you with the chicken. And I was probably too cheap to go for it. HAHA! Thanks for letting me know!

let's go to baden-baden!!!! i haven't had bon chon's chicken but i love the baden. they give you radishes and really yummy french fries. and i like eating the cloves of garlic under the chicken because they are all sorts of yum and freaking out people because the entrance to the stairs for the restaurant is kind of shady looking.

The soy-garlic sauce sounds good. And the sweet potato fries. I've never had pickled radish before, but that sounds good too.

Something about the Harry Potter movie, this particular station here only ever shows the first HP movie. Ever. For instance, this weekend they are showing it again. I actually am impressed that they showed anyone other than the first!

As far as I can remember, Bon Chon will give you radish pickles (free). You just have to ask for it I think.

Mangos - Bakery Steakhouse Bar combines my three favourite things in the world, next to oxygen that is.

It might just be my eyes/computer but the pickled radish reminds me of chinese almond jelly.

I'm not sure if there is a fried chicken place in London as far as i'm aware of or have seen, but there is a Korean restaurant called 'Arirang' if that helps in anyway, it's got some pretty good food and prices are quite good. I've only been there once so I can't help you on much, sorry!

I love Harry Potter, but I don't think I can watch the movie...over and over again. I can read the books multiple times. :)

soopling: Ahh crap! I wish I had known that before I gone...good tip for next time then, thanks!

Angeline: It does give a burning sensation.

And the radish totally looks like almond jelly. THANKS FOR GIVING ME A CRAVING.

Ulla: "Amazing" with a side of, "Ow my stomach is about to explode." Tasty food tends to do that though. :)

OMG, the fried chicken looks so sinfully delicious, all glistening in its artery-clogging, golden, crispy skin. I must go hunt down some Korean restaurant here in Sydney just for fried chicken, it seems such an glaring deficiency in that area in Sydney - except for KFC, which is not the same!

Hi Robin, when will your book come out? I just read a Times article about how bloggers are getting book contracts. If anyone deserves a book contract, you do!

bobogal: My arteries are at least .0001% more clogged after eating this chicken. IT IS AWESOME.

Book: Well, I'd buy a dozen copies and distribute them to all my favorite folks! Let's see if it takes five years...maybe we should have a Korean fried chicken bet going....

I noticed another commenter suggested Baden Baden and I absolutely agree with them. The chicken is truly marvelous and they have the pickled radish! They don't have sweet potato fries though.
-I hope your time in Chile improves and that you start enjoying yourself! I guess it's hard to look back on that experience as a lesson - but now you are an even smarter, more knowledgeable traveler.

And my week in Chile has been pretty awesome. I'm really tired though and look forward to going home, heh.