The sandwiches at Westville automatically come with mixed greens, but you can do away with anything containing minerals and chlorophyll with just one extra dollar!

"What? Please tell me more!" (Pretend we're having a conversation and that's what you just said. Work with me here.)

I would be happy to tell you more! And you can tell I'm happy because I'm using more than one exclamation mark!!

By relinquishing this extra dollar, you can replace your greens with french fries! Is this a good idea? When is it not a good idea to substitute fresh infant vegetation pulled from Mother Nature's bosom (or somewhere in that vicinity; as though I know where salad comes from) with sticks of potato bathed in a pool of burninatingly hot oil? Never. That's when. (No nutritionists were consulted in the reaching of this conclusion.) But sometimes, just once in a blue moon, fries can be overwhelming. Perhaps I wasn't that hungry. Maybe my fried food quota had already been reached for the day. Because when my grilled cheese sandwich platter was plopped in front of me, all I could focus on was the 75% of my large oval plate that was covered with a jumbled mass of fries too large to fit into my stomach. My brain attempted to find an eloquent solution to this spacial problem, but all it could come up with was, "Shit, son, that's a lot of fries."

Thankfully, I had three eating companions—Kathy, Olivia, and Olivia's friend Betty—to help me conquer the fries. When my fry-eating abilities slowed down to the pace of a disabled sloth, they lent me their stomach acids. I can't remember if we actually managed to eat them all, but if not, we got pretty close. More than 90% success rate.

I couldn't even finish my petite grilled cheese sandwich, a Portuguese muffin (something like an English muffin, but with less nooks and crannies) encapsulating a gooey heart of cheddar and gouda. It tasted great, of course—you can do no wrong with copious amounts of melted cheese splodged between bread with a crisp crust and soft, fluffy innards—but I ended up giving my last few bites to Kathy because the combination of cheese and bread paired with fat-soaked potato sticks gave me the sensation that a cannonball had invaded my belly with the intention of using it as the mother hive to give birth to more cannonballs.

The sandwich would've been less daunting if I had just went with the salad greens. Now I understand. Actually, the meager capacity of my stomach would probably make more sense if you knew that my dinner consisted of more than cheese, bread, and fried potatoes. I started off with an ear of grilled corn from Olivia's corn-on-the-cob seasoned with lime, cumin, and cotija cheese, which came three to an order despite that the menu said two. Not like I'm complaining. It was similar to the corn I had at the Red Hook Ball Fields, but not as good. I mean, I didn't expect it to be as good—there's a magical quality to food that is prepared right in front of you and then messily eaten under the bright skin cancer-inducing rays of the sun that you're not going to get in the middle of the night in the East Village. If you're wandering around the East Village at night and get the insatiable desire to stuff your face with plump corn kernels on the brink of exploding with sweet corny juices, this should please you enough. 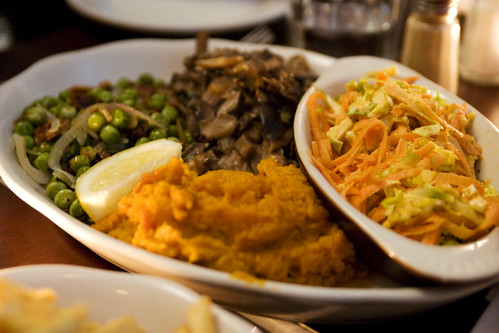 Since the market vegetable dishes come one for $5 or four for $13, we went with the four dish version: green peas with shallots, mushrooms with leeks and herbs, brussels sprouts apple slaw, and mashed sweet potatoes. My favorite was the green peas. Because I love peas. Did you know that freshly shelled peas are one of the best things to ever be borne forth from nature's loving hands? Aside from gelato? Each pea is like a globule of green sunshine whose ultraviolet rays of happiness explode just as your teeth violently pierce through the pea's skin. You rip into that pea and take the deliciousness that is rightfully yours. Because you're worth it.

...These peas weren't that fresh from the pod (they were...uh, cooked for one thing), but I'm just saying that peas are awesome in general.

The mushrooms were fine aside from from not possessing much leek action. The slaw was also good, crunchy and slaw-like (you know how it is...yeah) except I prefer brussels sprouts in whole, unshredded form. Otherwise it's no longer brussels sprouts—it's shredded stuff. It's texture. My taste buds mostly locked onto the apple flavor, while the brussels sprouts were filler. And fiber. Which is fine. I'm just sayin'... Betty's chili dogs looked quite good, and I'm not even that into hot dogs. Then again, I usually see hot dogs in a flimsy paper sleeve out of a street cart or next to fries, not accompanied by a salad of baby greens. The salad means it's healthy! And gives off a nice, green glow. We finished off with a giant slab of carrot cake. It wasn't anything like the Brighton Beach carrot cake, but it was at the top of its game as far as your typical American-style carrot cake goes. Light, moist, not too sweet, just carrot-y and spicy enough, and the frosting—something I tend to find fault in with diabetes-inducing sugar content or pastiness of texture—was light and smooth with the right amount of sweetness to compliment the cake as opposed to suffocate it with the bone-crushing combination of sugar and fat and...wait, I love sugar and fat...

Oooh...I want that grilled cheese sandwich. Somehow that puck-sized thing is inducing hunger for me at 7:20 am. Dammit, I WANT!

2. Your brain's "eloquent solution" to the mountain of fries made me make a giggle. :0

3. Peas ARE awesome. So are sweet potatoes (my skin is actually turning an orangish yellow because of all the sweet 'tatoes and carrots I eat...uh...at least my night-vision should be outrageously SUPER right?!). And holy sweet syrup-sopping Jesus, carrot cake! I'm about to eat breakfast and I WANT THAT PIECE RIGHT THERE.

I suppose it's too late now...

Girl, YOU were overwhelmed by food?!?? Holy moly, the next thing I'm going to hear is that the world is flat.

Everything looks delicious, by the way. If you're ever in the 732 or 212 area, let me know so we can go fooding and Scrubs-watching.

And I get free Italian food from the restaurant I work at (yes, I'm bribing again). Thinks abouts its :)

I love both grilled cheese and french fries, but that looks like a crazy amount of food...But of course, I would give it a try because, well, I love a food challenge!

hahaha, i love it yo. Westville is a place I have to find time to visit one of these days. The village is full of things to discover!

..Okay maybe not, but it will hurt.

Terrormisu: I think carrot cake is totally okay for breakfast.

Steph: ..The world IS flat!

And we totally need to do this SCRUBS marathon. With your sandwiches.

dynagrrl: There are better food challenges than this I think. Like...BO SSAM! OMG. Except that's not really a challenge; it's just HEAVEN. Unless you're a vegetarian.

i love peas too.

Tina finally sent me the link to your blog, and I've been missing out! love your writing!

Two things:
1. the cojita cheese and corn- mmm! also try Acme Bar and Grille on Great Jones street. I thought their's was pretty good, but I'm curious as to what you would think. They also have good gumbo soup sometimes :)

2. OMG peas. straight from the pod picked from the tree. it's the only peas I'll eat. the juicy crunch of yumminess. paired with a good roasted corn. Mmm!

ps- since you love sugar and fat, try the Missisippi Mudcake in Acme too.

astrid: YAY WE CAN FORM AN "I LOVE PEAS" CLUB although that probably already exists.

Kim: Thanks for stopping by! I've passed Acme before (er, many times!) but never thought of eating there. :O That should go on my list. Yess. I like the sound of this MUDCAKE.

"gave me the sensation that a cannonball had invaded my belly with the intention of using it as the mother hive to give birth to more cannonballs"
I LOL'd. Had to come out of lurking just to say that :) Also, your writing is awesome =D

SuperChomp: Thanks for reading...and delurking! :)

YUM! How did we not find this on our trek through the East Village last year?! We ended up in the Falafel Stand from Hell instead. Wish we had found Westville. Love your writing. I'LL BE BAACK.

Brock: Falafel Stand from Hell...that's a catchy name. I'll be sure to avoid it. Too bad you weren't walking around the West Village; you could've gone to Taim, aka The Falafel Made of Baby Angels.

*** Valuable Hint to the Side-Orderer ***
If you have a choice between greens or fries with a sandwich-like item, almost any restaurant will give you half of each if you ask. Nothing like alternating crunchy, green leaves with also-crunchy hot potato sticks!!

I had a long time without taste corn-on-the-cob I think that I going to visit this restaurant tonight because I love that.