Start off with some horchata "I'll take a horchata." I didn't plan on ordering horchata—I tend to stick with the flavorless and free tap water—but about half a second (or less) after seeing the row of horchata-filled cups in the refrigerator behind the counter at Yola's Cafe, the craving set in.

"I'll take one too," added Tristan.

Why do I love horchata so much? Mostly because its flavor combines sweet, cinnamon, milk, and rice into a light beverage that tastes like drinkable rice pudding, a great quality when you want rice pudding without the inconvenience of chewing. Also, unlike my other favorite beverage, milkshakes, downing a glass of horchata makes me comfortably refreshed, not like my stomach has been leadened by molten ice cream. The version at Yola's Cafe was sweeter than what I was expecting, but horchata has tasted a little different at every place I've gotten it from, and I always happily gulp it down. While waiting for our food to arrive, we watched the flat-screen TVs playing Spanish VH1's footage of Spring Break, meaning lots of dancing slim, tan, bikini and trunks-clad young people writhing around and...I think that was mostly it. In other words, the perfect accompaniment to my pork-filled lunch. It was easy to settle on the carne enchilada torta, a sandwich filled with spicy pork, refried beans, onions, cheese, avocado and jalapeños, because it combined three of my loves: pork, spiciness, and ingredients smushed between two slabs of bread. For $6, Yola's gives you a huge-ass sandwich—so huge that I'm ashamed to admit that I couldn't finish it. But the portion that went into my stomach was an agreeable mix of textures, flavors, and major food groups: soft bread roll, shredded cheese, hot jalapeños, crunchy raw onions, creamy avocado, and a mostly tender pork cutlet seasoned in something mouth-tingling. I say "mostly tender" because every now and then my mouth would chew on a bit of pork that had taken on the form of something that my teeth couldn't seem to penetrate, but it's safe to say that the good (edible pork, plus everything else in the sandwich) outweighed the bad (less edible pork). 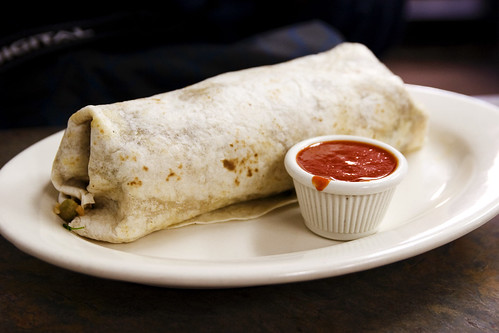 Tristan went with a stubby log-shaped tortilla bag filled with vegetables, also known as a veggie burrito, accompanied by hot sauce that would later get all over Tristan's hands. 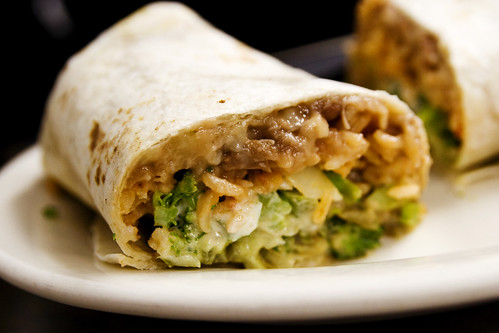 The simple name of "veggie burrito" doesn't fully describe the explosion of vegetarian-friendly foodstuffs held within the tortilla's thin walls. Brown rice, broccoli, onions, peppers, refried beans, jack cheese, guacamole and sour cream all await you in one (giant) mouthful of this burrito. On retrospect, I may have enjoyed this more than the pork sandwich, or at least felt less like I was in mid-transformation to becoming a pig. If I could do half pork sandwich / half veggie burrito, that would feel slightly more balanced. ...Igrnoring that one-half of each would probably be enough for one meal.

Next time I shall get my veggie burrito experience.

You forgot to mention who recommended Yola's!

I now have to try the Torta. And the horchata of course.

Usually their pork is perfect?! Well at least it sounds like you liked it.

I'd never be able to start with horchata. It is so sweet, it has to be dessert. As far as aquas frescas go, my fave is tamarindo. Watermelon, on a hot day.

You goto Williamsburg soooo much!! -=D The food looks so yummy, sucks that I don't live in williamsburg anymore -=(

Speaking of williamsburg, I was waiting for the J train with my bf yesterday and out of no where he starts laughing. He told me to shhh...then I heard it! This girl was on the phone asking her friend if she's at the right platform...."the sign says to brooklyn via w-m-s-burg b-d-g" I couldn't help but snicker..-=X

That burrito is what I would call a "baby burrito". Because it is as big as a baby! Yay!!

Damn, I keep coming back to your blog to procrastinate... it's more evil than Facebook. I hatez you Robyn!!!

...no I heart you, please write more posts... and maybe invent that essay-writing pizza slice... T_T

i always get the jamaica when i go to my local taqueria, but i'll have to try the horchata next time. (the downtown taqueria in jersey city, which you should totally try because the pork tostones are EXCELLENT)

i want that sandwich, and i want it now.

Please don't drink straight tap water, it not safe. Not anymore! Unless you want to be on the same medications that all the grandparents of your entire town are on - hey, though, that does give new meaning to drinking "floridated" water, haha!

Steph: I hope you enjoy it! I mean, YOU WILL, IF YOU ARE HUMAN.

You should get your own image. It can have you face on it and like..a starburst behind...heh.

Lisa: Oh no, it's totally my aperitif! Something might be wrong with me, I admit.

wonders: I happened to spend the weekend there; otherwise I don't do as much Brooklyn fooding as I'd like!

Jesse: I HAVE YOUR LUUUV!

Yup, it's the size of a bebbeh. It could have its own little bassinet-shaped platter.

Also, sorry about my wonky site; the server is mega slow. I'm used to it, but basically...euh...yeah, it borks a lot and then stuff comes up three times. I can delete them though, no prob. I should probably switch hosts though.

Michelle: I've only eaten in Jersey City once. :( Do I fail? Probably. (It was a night of Indian food. Way too much. Indian good.)

Conveniently, the sandwich also wants you.

you couldn't finish that? weak. weak!

Vince: I know...(hangs head in shame)

we also, bizarrely enough, have some great french.

Yeah, this is the first time I've ever admitted that a veggie burrito looked tastier than a pork sandwich.

I can't figure out how restaurants get their horchatas to taste so different from one another's. In my allergy-med-induced haze, I can't figure out if that apostrophe is supposed to go before the s, or after ...

Michelle: Great French? ...Okay, I need to get in on that. Haven't had duck confit in a while and the arteries need a re-clogging.

I had a really rich, but good, horchata at Caracas Arepa Bar in the east village. I love horchata. Here's my post...http://elaineperlov.blogspot.com/2008/02/horchata-horchata-horchata.html